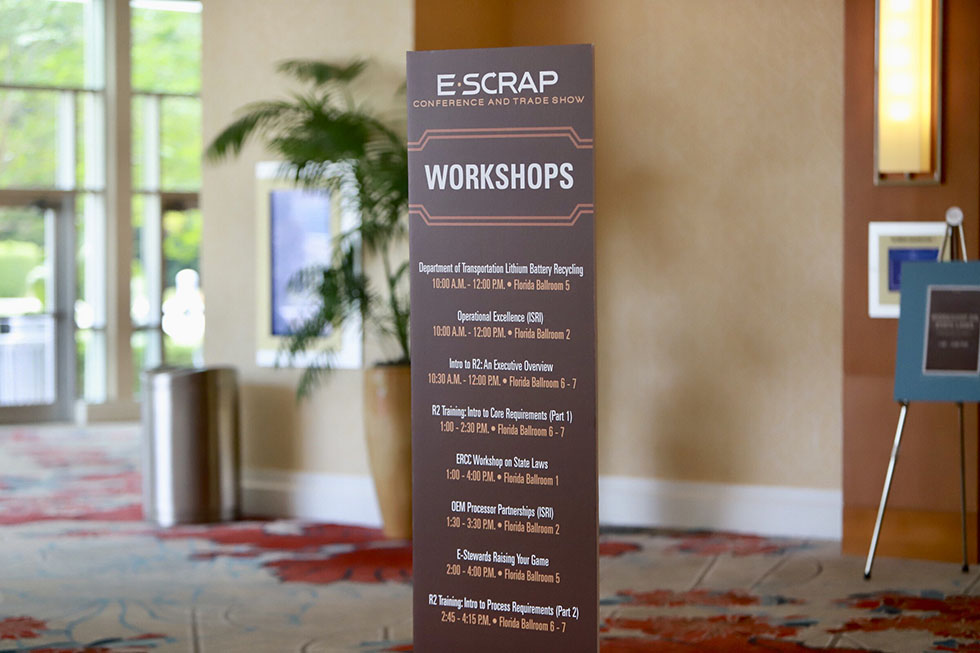 On the opening day of the E-Scrap Conference and Trade Show, a series of workshops brought attendees up to speed on some of the most critical topics in electronics recovery.

The 17th annual E-Scrap Conference began Monday at the Hilton Orlando in Florida. More than 1,100 electronics recycling and reuse professionals have gathered for the three-day event. The sold-out exhibit hall features roughly 125 different companies and organizations.

Representatives from a variety of industry and government groups got the discussion started yesterday with eight topic-specific workshops.

Karen Pollard of the U.S. EPA and Neal Suchak of the U.S. Department of Transportation both spoke on the increasingly important issue of lithium-ion battery management. The energy-packed items can cause fires and explosions when punctured or poorly packaged.

At the same time, the cobalt, lithium, graphite and other materials inside the batteries are important feedstocks in the manufacture of a growing variety of products in a digitally enabled world. So finding ways to procure them via recycling as opposed to mining will likely be a growing priority.

“Is this a safety or a sustainability issue? I’m here to say it’s both,” Pollard noted. 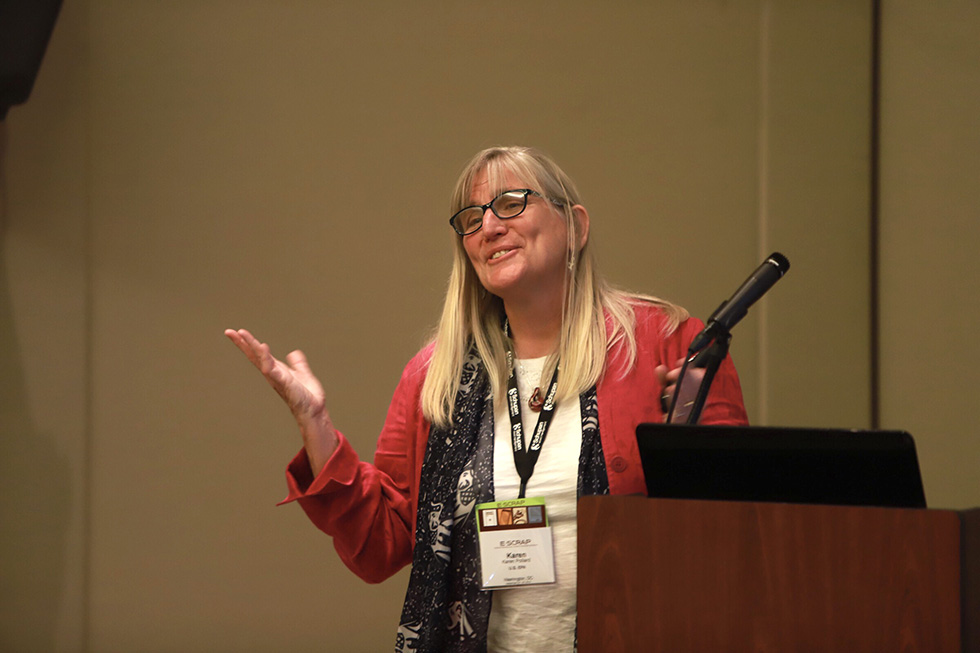 In the afternoon, processors who handle OEM-generated material discussed how e-scrap and ITAD firms can forge better connections with the manufacturers that need recycling partners to hit voluntary and mandated quotas.

It typically takes some work to align the manufacturer and processor company cultures. As Craig Boswell of HOBI International noted, e-scrap companies by and large bring in less than $100 million per year, but their OEM customers often have revenues in the billions.

One important string in the relationship is certification. Joe Clayton of processor Arcoa noted that years ago, OEMs would pay their processors to obtain certification. But now, certification is so common that it’s essentially a price of entry into that market, Clayton explained, and processors are no longer compensated for certifying.

But that doesn’t take away from the importance of certifications, said Adam Shine of processor Sunnking.

“The reality is, if a company hasn’t made an investment in certification, they’re probably not a legitimate player,” Shine said. 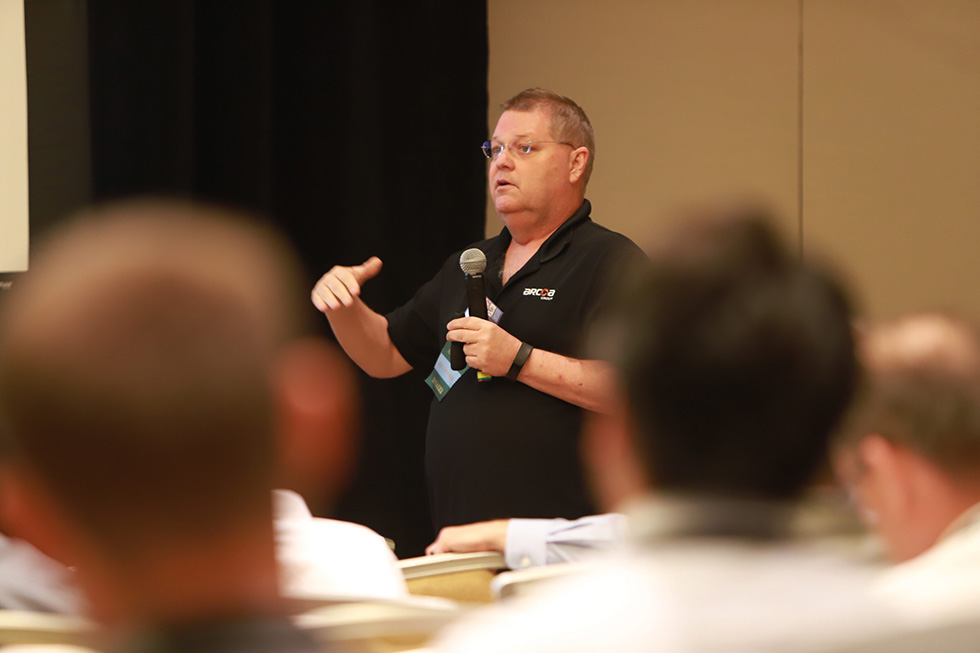 Equipment manufacturers were also central to the conversation in a workshop focused on legislated state recycling programs, organized by the Electronics Recycling Coordination Clearinghouse.

In that event, Brandon Seegmiller of computer manufacturer HP detailed an effort being formulated by his company along with a handful of other OEMs to push forward a new format for some state programs. The group is calling itself the E-Waste Coalition.

If adopted by a state, the framework would have manufacturers partially fund the system required to collect and recycle consumer electronics, using a model similar to what is now used in Illinois. In that Illinois system, an industry-managed nonprofit works to ensure all material collected by counties that opt into the system is recycled. It’s a move away from weight-based OEM goals.

But the E-Waste Coalition model would add another funding element to the equation: advanced recovery fees paid by consumers when they purchase new TVs or computer monitors. The money would be divided among the OEM groups responsible for handling recycling, the state agency administering the program and other entities that might have a role in the process.

Right now, the group is discussing the concept with legislative aids and various other stakeholders in a handful of states that have legislated programs that have encountered funding friction in recent years, Seegmiller said. Those states include Michigan, Minnesota, New York, Pennsylvania, Utah and Wisconsin.

The exact fee amount has yet to be determined but would likely fall in the $4 to $7 range, and it would have a cap set in statute. If implemented, the fee would be displayed separately from the price of the product at the time of purchase.

“It creates transparency and creates awareness as well,” Seegmiller said. 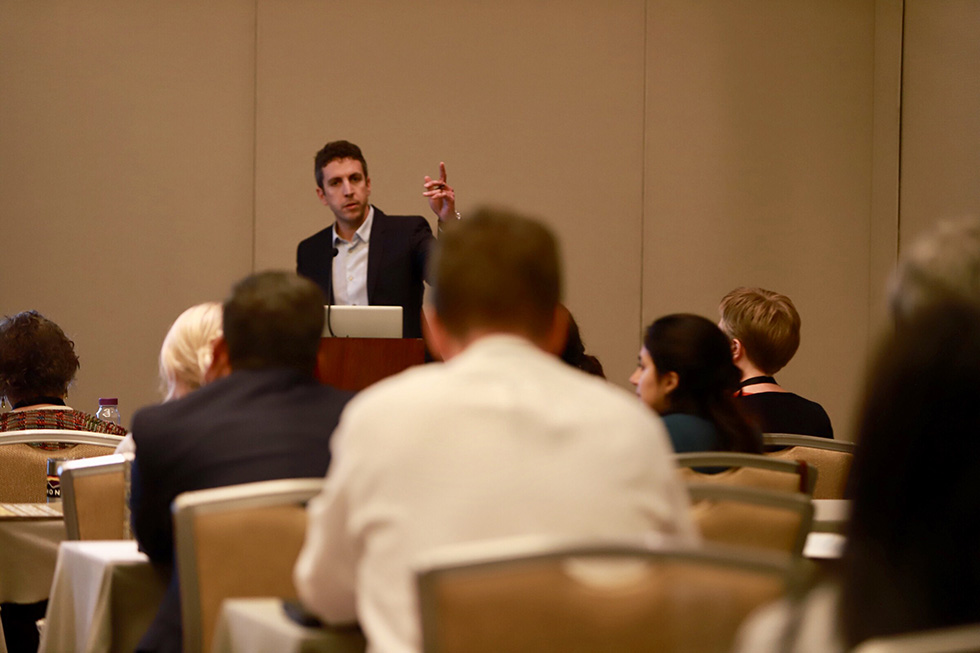 Can you categorize your business?

Finally, in a session on operational best practices for processors, speakers discussed different business categories that exist in the e-scrap and ITAD industry, and why it’s important for companies to know where they stand.

“New entrants” would be young companies that often have limited certifications and clients who may have limited interest in how exactly the processor or trader carries out its operation. “Competitors” tend to more frequently have certification, offer additional services (such as reuse) and compete on price with other processors.

“Leaders,” meanwhile, are larger companies with clients that are interested in the e-scrap process: As such, these companies are focused on quality of service that could necessitate multiple certifications, sophisticated management systems and extensive options when it comes to ITAD and resale.

And “Transformers” are companies with the most sophisticated operations. They leverage enterprise resource planning (ERP) systems to track assets and have the highest degree of transparency for clients.

“Typically, companies fall into more than one category,” Sandlin said. “That’s OK. It’s just a question of where you are and where you want to be.”

The E-Scrap Conference and Trade Show continues today and Wednesday with a session agenda featuring a wide variety of topics.