Here’s the plan for cleaning up one major CRT stockpile 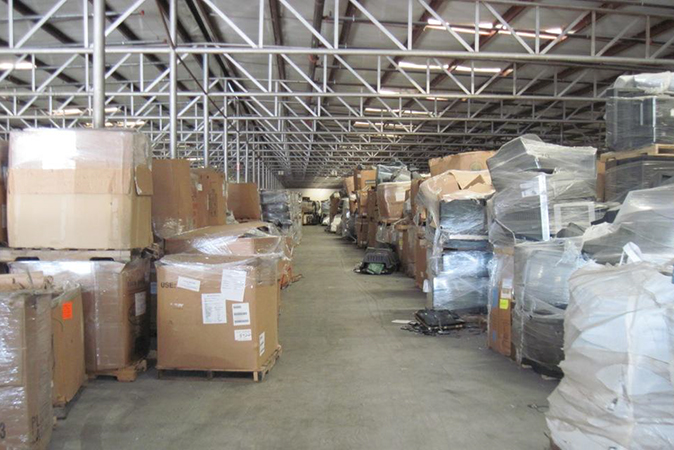 About 8 million pounds of TVs are stored on pallets at the former GES site in Winchester, Ky. | Courtesy of Kentucky Division of Waste Management.

In Kentucky, a treatment additive will be mixed into millions of pounds of leaded CRT glass, allowing for relatively cheap disposal of the problematic material in a non-hazardous waste landfill.

The additive approach is being used for a nearly $3 million CRT cleanup underway in north-central Kentucky, where state and local officials are dealing with the glass left behind by shuttered processor Global Environmental Services (GES).

GES failed in late 2015, leaving millions of pounds of CRT glass at its three Kentucky locations: Georgetown, Cynthiana and Winchester. A landlord already paid to clean up materials GES buried at its Georgetown location, and the Kentucky Department of Environmental Protection contracted with Chase Environmental Group for the cleanup of outdoor leaded sand piles in Georgetown and Cynthiana.

Since then, government officials and Louisville, Ky.-based Chase have turned their attention to planning the cleanup of 26 million pounds stored inside the Cynthiana and Winchester facilities.

An interview and documents obtained by E-Scrap News provide a window into how crews will conduct the cleanup, how the costs break down and how long it will take.

Competing for the cleanup

Earlier this year, administrators in Harrison County, where Cynthiana is located, issued a request for proposals (RFP) for cleaning up the stockpile.

The RFP asked for bids to process and stabilize an estimated 12,756 tons with a product called TerraBond or an equivalent product. TerraBond reduces lead leaching, allowing the material to be disposed of in a Subtitle D landfill, or a non-hazardous waste landfill, at a lower cost than sending it straight to a hazardous waste landfill. The estimated project cost was $3 million, according to the RFP.

The bid submissions show that both PECCA and Chase proposed processing material on-site before taking it to a nearby landfill. Kuusakoski proposed to transport the materials to its facility in Peoria, where the units would be dismantled and glass processed for shipment to downstream outlets.

PECCO’s bid totaled about $2.4 million, Kuusakoski didn’t submit a price, and Chase quoted $2.8 million to $2.9 million, depending on the final determination of how much material needed to handled.

Harrison County selected Chase, which will use TerraBond. The company previously used TerraBond to treat CRT materials buried in Georgetown and leaded sand stored at Georgetown and Cynthiana.

Chase has cleaned up other CRT abandonments, as well, Jon Maybriar, director of the Kentucky Department of Environmental Protection’s Division of Waste Management, said in an interview with E-Scrap News. The division is funding the work.

“That’s one of the reasons the county awarded them the contract, is that they’ve successfully done this at other CRT sites,” he said.

Testing and treating for toxicity

In recent months, Chase Environmental Group erected a large CleanSpan fabric structure at the Cynthiana location to house a hammermill and other processing equipment. Crews are also working on restoring water and electrical service to the property, Maybriar said.

Chase is taking samples of the three fractions and conducting toxicity characteristic leaching procedure (TCLP) analyses to determine their lead content, and, thus, whether they’re hazardous, he said. According to the RFP, the company is required to conduct a TCLP analysis for every 250 tons processed.

So far, the results have shown that both the ferrous and non-ferrous/plastic/wood streams are not hazardous, which means they can be sent to a municipal solid waste landfill (even though the ferrous metal is passing TCLP, it’s considered a solid waste ineligible for recycling, Maybriar said).

The CRT glass tests are coming back as hazardous, which means it must be treated by TerraBond before going to the MSW landfill, he said. Supplied by Indiana company Terra Materials, LLC, TerraBond is a buffered sulfur-based compound that surrounds and binds heavy metals. According to Chase’s bid, an excavator will be used to mix the TerraBond additive with the CRT glass while water mist is applied. The dosing is at 4% TerraBond by weight. Each batch will take four to six hours to mix.

According to Chase, TCLP testing must show treated material has a lead content of less than 5 milligrams per liter before it can be hauled to a nonhazardous landfill. If it exceeds that, it’ll be treated with TerraBond again.

All of the materials destined for disposal will be sent to the Rumpke Waste and Recycling Services Pendleton County landfill, a roughly 30-minute drive north of Cynthiana.

Maybriar said space will have to be created at Cynthiana before units can be brought over from Winchester. Chase will assess whether it can recycle material from the display devices first, to reduce the costs of the cleanup contract.

“Any opportunity they have for recycling this material, the company’s been challenged to do that,” he said.

Estimating costs to the state

After charging $250,000 for mobilization, Chase will bill Harrison County 10 cents per pound for material processing, stabilization, transportation and disposal. If the estimates of material weight are accurate, that could total $2.55 million.

Chase estimates exterior contaminated soil cleanup, backfill and building cleaning costs at $135,000, although those costs are included in the per-ton fee as long as the total amount of material turns out to be at or above the 12,756-ton estimate.

Maybriar said the state will provide reimbursement grants to Harrison County to fully fund the project. The money comes from two different sources: landfill tipping fees and fees on hazardous waste generation in the state.

The department believes that the cleanup process chosen is “the most cost-effective, environmentally friendly process of managing this waste,” Maybriar said.

The processing system, which is expected to be running by Oct. 1, will be capable of handling 15 to 16 tons per hour, he said. Maybriar anticipates the work will be finished in late spring or early summer 2020.