One state’s e-scrap landfill ban again in the crosshairs 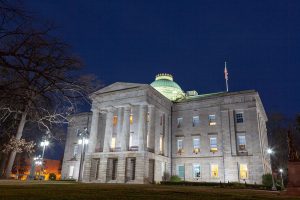 Lawmakers in North Carolina are again advancing a bill that would eliminate restrictions on disposing TVs and computer equipment.

A committee of the North Carolina Senate has approved Senate Bill 553, called the “Regulatory Reform Act of 2019.” Among the many changes, it allows the landfilling or incineration of discarded TVs, computers, monitors, printers and scanners.

The Senate’s Agriculture/Environment/Natural Resources Committee on May 23 approved the bill. According to the Carolina Recycling Association (CRA), the bill is slated for Senate floor consideration very soon. CRA included a talking points memo in an email to members arguing for the importance of improving funding mechanisms for the state program instead of repealing the landfill ban.

“We encourage you to contact your representatives and senators immediately in order to educate them on the importance of the established NC electronics recycling industry,” CRA stated.

In a separate email, CRA noted: “The premise for the repeal is based on the assumption that there are not many CRTs left in the waste stream and that modern landfills are able to provide protection from heavy metal leachate entering the water supply. This assumption is incorrect.”

The state’s electronics recycling program requires manufacturers to pay annual fees, submit recycling plans and meet TV collection targets. Local governments that contract with e-Stewards- or R2-certified processors are eligible to receive funds from the state to offset collection costs (most devices handled through the program are collected by local governments).

This isn’t the first time lawmakers in The Tar Heel State have tried to eliminate the landfill ban or the entire electronics recycling program. In June 2016, a regulations-lifting bill that axed the program and disposal ban passed the Senate but failed to advance in the House of Representatives.

In fall 2016, Brett Henderson, who is now vice president of North Carolina e-scrap processor PowerHouse Recycling, penned an op-ed for E-Scrap News noting the repeal was still looming and arguing that the program shouldn’t be cut.

Both chambers of the North Carolina legislature are currently controlled by Republicans. The governor, Roy Cooper, is a Democrat.