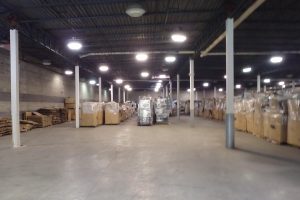 Material inside the facility formerly operated by eWaste Recycling Solutions in Lewiston, Maine.

Processor eWaste Recycling Solutions, which handled a sizable portion of Maine’s regulated material, has closed. Over 1 million pounds of leaded CRT glass and a substantial stock of intact devices remain at its former site.

The Lewiston, Maine-based company closed its doors in late April. Since then, the property owner who was leasing space to the company reached a deal to send e-scrap to URT Solutions for processing.

“He’s really motivated to get his space back and he’s very willing to foot the bill at this time,” said Jeff Gloyd, vice president of sales and marketing at URT, which will process the electronics at its Dover, N.H. facility 80 miles away.

CRT markets appear to have caused problems for eWaste Recycling Solutions (ERS). The company lost a downstream outlet for leaded glass when Camacho Recycling stopped accepting material, and ERS is now being sued for sending glass to Closed Loop Refining and Recovery years ago.

The company was sending leaded CRT glass to Camacho Recycling in Spain, where the material was used as an ingredient for ceramic tile production. Camacho halted inbound feedstock shipments last fall, causing headaches for many in the e-scrap industry. Cifrino noted ERS’s last shipment to Camacho was in September 2018.

ERS had a license to dismantle CRTs at a facility in Auburn, Maine, just across the Androscoggin River from Lewiston, but that site closed by the end of January 2019, she said. According to Sustainable Electronics Recycling International (SERI), ERS’s R2 certification for the Auburn location had been suspended in October 2018. The Lewiston location was not listed as having R2 certification.

The company applied to DEP to process CRT tubes in Lewiston, but DEP didn’t issue the license because the company’s lease was set to end soon and it failed to submit documentation showing an extended lease, Cifrino said. 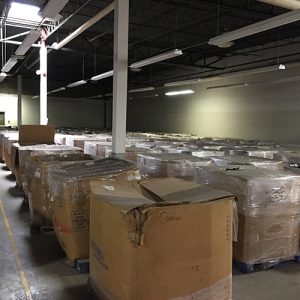 Over 1 million pounds of funnel glass and an indeterminate amount of intact mid- and low-grade material were left at the ERS site.

Separately, the company is also one of over 40 e-scrap companies being sued for sending glass to Closed Loop Refining and Recovery, which failed and left stockpiles of hundreds of millions of pounds of glass at sites in Ohio and Arizona. Garrison Southfield Park, an investment firm that owns two former Closed Loop warehouses in Columbus, Ohio, alleged that ERS sent at least 1.67 million pounds there from around August 2012 to around March 2013.

The complaint was filed in federal court on March 28, 2019. It’s unclear to what degree the lawsuit contributed to the company’s closure. DEP was told the Lewiston facility closed April 22.

DEP has not taken enforcement action against ERS, but Cifrino said the department is working with the Attorney General’s Office as they investigate whether any legal violations occurred.

This marks the first time an e-scrap company participating in Maine’s extended producer responsibility program has closed suddenly and left stockpiles in its wake, Cifrino said.

ERS was one of a handful of approved consolidators under the state program, and the company handled more than one-third of the program’s material, said Elena Bertocci, an environmental specialist who oversees Maine’s electronics recycling program. Specifically, in 2017, ERS handled 2.66 million pounds out of a total of 7.47 million pounds of program weight, or 36%, she said.

For the remainder of this year, Maine has four other approved consolidators: two based in Maine and two out of state, all approved for device dismantling. They’re stepping up to fill the void, Cifrino said, and so far DEP hasn’t received any calls from collection sites complaining that material hasn’t been picked up. That being said, the busiest season – from June through September – is still to come.

In the meantime, plans are underway to clean out the Westminster facility, which is owned by developer and real estate executive George Schott.

URT’s Gloyd said his company and Schott reached a deal to have URT take material from the facility, which includes over 1 million pounds of funnel glass and an indeterminate amount of intact mid- and low-grade material, including whole TVs and monitors. Schott is arranging for transportation to URT’s Dover plant, where the CRT glass will be processed into a fine powder used to make frit, a key ingredient in compounding enamels and ceramic glazes.

Gloyd noted URT has never received glass from ERS, but staff at the two companies know each other: URT’s salesman for Maine has known and kept in contact with Dumas of ERS.

“With the volume of leaded glass that needs to be properly recycled, I think it was pretty easy for the landlord to make the decision to come to someone like us, because of the relationship and because we’re actually able to process the glass,” Gloyd said.

The first shipment should arrive in Dover any time, Gloyd said. The plan is to ship one or two loads per day from the site. At that rate, it will take roughly six weeks to clean out the facility.