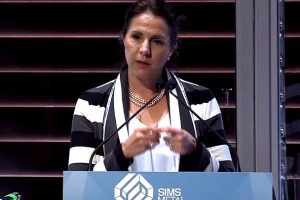 With massive amounts of server farm electronics expected to be replaced in coming years, Sims Recycling Solutions has its head solidly in the cloud.

Executives from the global ITAD and e-scrap recycling company recently discussed how they will aggressively pursue contracts for processing old computer equipment from data centers, which are essential cogs in the cloud storage system relied on by large and small companies alike.

Sims Recycling Solutions (SRS) is a division of publicly traded metals company Sims Metal Management (SMM), which is headquartered in Australia. SRS processed about 474,000 short tons of used electronics in its 2018 fiscal year.

“What we’re really looking at here is the margin improvement that we can get out of recycling the cloud, and that’s obviously got to do with the resale of a number of key components, as well as the commodity business,” said Alistair Field, group CEO and managing director of SMM. “We see that shift, and really our focus is going after that part of the e-recycling business.”

Field and Ingrid Sinclair, global president of SRS, presented to investors in Sydney on April 8 about growth plans for SMM. Changes in the e-scrap realm were just part of a larger strategy for the global metals and recycling giant. Other initiatives include deepening involvement in the scrap metal business, moving into waste-to-energy for the first time, and expanding recyclables sorting and marketing in the municipal solid waste recycling sector.

For SRS, Field and Sinclair emphasized opportunities in working with data centers, where more and more data is being stored. SRS sees pursuing data center equipment as a strategy to boost profits, because it can do so without adding significant capital costs.

Sinclair noted data centers are a growing market. Not only are more organizations outsourcing storage of their data, but they’re also storing data multiple times for redundancy. She pointed to cloud revenues enjoyed by tech companies totaling tens of billions of dollars last year. Additionally, the market for data center equipment is expected to grow at an average of over 10 percent between 2015 and 2020.

About 6 million tons of rack and server materials are currently in use, Sinclair said, and they have a refresh cycle of about three to five years. As a result, SRS estimates up to 2 million tons of high-quality reusable and recyclable material will be replaced each year. Field told investors SRS is targeting to recycle 5% of the U.S. cloud by fiscal year 2022 and 10% by fiscal year 2025. He declined to give revenue projections related to the new market.

Sinclair and Field said SRS is well positioned to get into the market. The company has processing facilities or vetted subcontractors with facilities in countries with the greatest amount of data center infrastructure. That includes the U.S., which is by far the largest with more than 2,200 data centers. That in-country presence is important because it eliminates cross-border shipping and reduces logistics costs, Sinclair said.

“We are uniquely positioned to go after this growing market without adding extra capital expenditures,” she said.

SRS also has existing relationships with major infrastructure as a service (IaaS) companies, which want to do business with a trusted company with a global footprint, Sinclair said. Field noted a key aspect of the service is managing sensitive data.

Data centers come in a couple of different types: permanent warehouse installations, and self-contained, modular facilities. SRS already has contracts to handle both. Sinclair said her company has a pilot contract to recycle 6,000 tons of electronics from a permanent installation, and it recently decommissioned 20 of the mobile centers in Virginia. SMM is able to use its cranes and crews armed with torches to break down the mobile units for recycling, providing synergies competitors don’t have, she said.

When asked who SRS’s competitors are in the U.S., Sinclair noted ERI and Regency Technologies. While the executives pointed to advantages they believe SRS has, Field said he expects the company will still face competition. “You can well expect that,” he said.