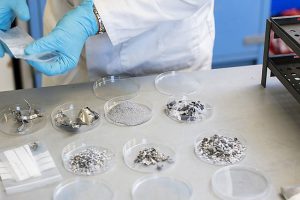 With an eye toward demonstrating the variety and amount of metals available from e-scrap, geologists at an English university used a household blender to take a look inside a mobile device.

The University of Plymouth scientists dropped an intact mobile phone into a blender and shredded it into dust, the university explained in a press release last month. The scientists, Arjan Dijkstra and Colin Wilkins, grew interested in the project because of the increased demand the global mining industry is experiencing due to consumer electronics, according to the Devon, U.K.-based university.

The team’s goal was to “show the quantities of rare or so-called ‘conflict’ elements each phone contains, and encourage greater recycling rates once the devices reach the end of their useful lives,” the university wrote.

After blending the phone, the duo mixed the dust with sodium peroxide at more than 900 degrees Fahrenheit. Doing so allowed them to analyze the metal content within the device.

“This means that concentration-wise, a phone has 100 times more gold – or 10 times more tungsten – than a mineral resource geologists would call ‘high-grade,'” the university noted.