How the Pentagon recycles its e-scrap 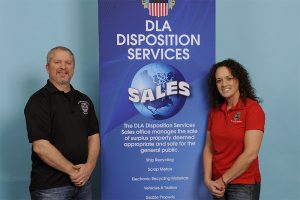 It’s well-known the U.S. military is a huge buyer of goods, including electronic equipment. Officials recently shed light on how the Department of Defense approaches disposition.

DLA is the combat logistics support agency for the Pentagon. Based in Battle Creek, Mich., Disposition Services transfers or disposes of used military equipment, including electronics. E-scrap alone generates millions of dollars a year for the military.

Scrap electronics are sold via a term contract, which is awarded after a sealed bidding process, Koleski said. The current contract holder is Regency Technologies, a processor based in Twinsburg, Ohio with locations across the country (Regency president Jim Levine declined to comment to E-Scrap News about the contract with DLA Disposition Services).

Before awarding a contract to a bidder, DLA Disposition Services ensures the bidder has the capabilities to handle the volume of material generated. It also does inspections and record checks to ensure the company is environmentally compliant and has all necessary permits, Koleski said. The processor, which must be certified to either the R2 or e-Stewards standard, also undergoes a background investigation to look for past material exports. Other personnel inspect to ensure facility security is tight, he said.

Koleski said most of the e-scrap consists of computers and TVs, although there is also military-specific equipment that must be “demilitarized,” which means it must be destroyed. For “demil” property, three DLA personnel witness and supervise the destruction process at the facility, he said. Ownership of “demil” material doesn’t technically transfer to the processor until after it’s been destroyed.

Regency has a department for testing and refurbishing electronics, Koleski said, but most of the material is disassembled for recycling. For the majority of computers, the hard drives have already been removed before the device is turned into Disposition Services, he said.

Ganka said the military branches each have their own requirements for data destruction before they hand over equipment to her agency.

“Air Force is an example – they will not just degauss hard drives, they will take them out,” she said. “And that is pretty much a common practice for us, just to protect our warfighter.”

If Regency wants to resell equipment under the contract, it must seek permission from the DLA, Koleski said. The DLA Disposition Services property control office then vets the equipment, looking up information about the data that was stored on it, before deciding whether to give the OK.

The current contract is for two years, with up to three 1-year extensions. Regency is in the fourth year of the contract, with a current end date in November 2019, Koleski said.

DLA Disposition Services officials haven’t decided yet whether they’ll extend it another year or put it back out to bid, Koleski said. They generally make that decision three to six months before the contract is set to expire.

The contract is technically split into two, with one covering material west of the Mississippi River and the other covering everything east. Regency won both in late 2015.

Koleski said his agency has discussed further splitting the contract into smaller geographic areas to better align with the industry and make pickups and transportation easier. DLA Disposition Services’ global network includes 103 locations in 15 countries. The current e-scrap contract materials are sourced throughout the United States and its territories.