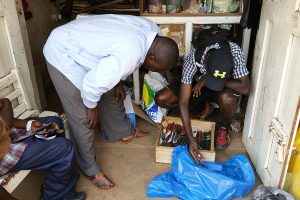 In Uganda, end-of-life cell phones are collected before being shipped for recycling.

Tech companies are seeing boosted demand for environmental leadership, and e-scrap management concerns continue to mark developing countries. An enterprise in Europe is working to help out on both fronts.

Closing the Loop is a Netherlands-based business that contracts with T-Mobile and other wireless industry stakeholders to provide those companies with a mobile device “offset” program.

Under the model, wireless providers, phone retailers and others add a small fee to the cost of a new phone. Closing the Loop uses that money to work with informal recycling networks in a handful of African countries to collect end-of-life devices, shipping them to Umicore and other recyclers in the EU for processing.

Companies funding the initiative can then promote the fact that for each new product they put on the market, an old one has been collected and processed through proper channels. To date, the effort has collected roughly 2 million devices.

“It’s a one-for-one business model,” said Joost de Kluijver, founder and director of Closing the Loop. “It’s based on both extended producer responsibility and carbon offsetting concepts. We tried to make those good models more practical and more tangible for this market.”

Closing the Loop is entering complex territory in establishing and scaling up the mobile offset concept. For years, global stakeholders have encountered barriers when attempting to take funding and materials recovery strategies from wealthier parts of the world and then leverage them in poorer areas. 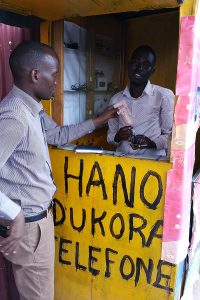 A collection point in Rwanda.

According to De Kluijver, the goal of Closing the Loop is to allow informal traders to continue to move material and support their livelihoods, but to ensure safe and secure final disposition.

“We want people working in [Ghana’s] Agbogbloshie or Lagos to still do what they’re doing,” he said. “We shouldn’t be trying to roll out a European system; it won’t work. We need to include the African context and African reality. But at the point where that reality starts having a negative effect, that’s where we can make it better. Our approach puts no one out of a job.”

In 2017, U.S.-based Fair Trade Recycling launched an offset initiative that aimed to fund e-scrap collection in Ghana. But that program looked to draw funding from exporters of used material, making it different from the Closing the Loop model of collecting income from companies that push sales of new devices.

After doing work on a water project in Tanzania, De Kluijver launched Closing the Loop as a nonprofit venture in 2012 and transitioned it to a commercial business in 2014. Initially, the idea was to generate revenue entirely from the value of commodities recovered from phones in Ghana, Nigeria and Uganda.

But the economics of that approach didn’t work because it was so costly to try to set up new collection networks. “We lost money there,” said De Kluijver. “Let’s just call it ‘learning money.'”

In 2016, the business pivoted toward the current offset model with corporate backing.

Closing the Loop charges its telecom partners 2 to 5 euros per phone collected. That income allows the business to work with collectors in five African countries – Cameroon, Ghana, Rwanda, Uganda and Zambia. According to De Kluijver, collectors in the system are paid more for end-of-life phones and components than they would be if they relied on existing pathways.

He noted that in Zambia, the business pays 5 to 7 euros per kilo of intact phones. “We didn’t find anyone there paying anywhere near the price,” he said. In Rwanda, Closing the Loop is able to pay about 10 percent more for old phones than local buyers, he said.

Relationships on the ground

“In their country, they have dozens or sometimes several hundred people in their networks,” said De Kluijver. “We estimate 2,000 to 3,000 people have benefited from being part of our supply chain.” He said collection networks now include individuals, churches and repair shop owners. 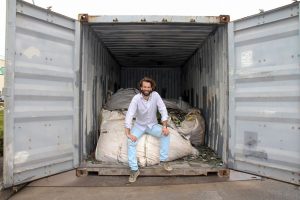 Joost de Kluijver, founder and director of Closing the Loop.

Meanwhile, the companies backing the program have a sustainability-oriented story they can tell customers. Such positioning is becoming increasingly important in the mobile market.

“A lot of customers are wanting sustainable consumption,” said De Kluijver. “Our partners are able to reach a new customer group simply by adding a small fee for each phone they are selling.”

In addition to T-Mobile, Closing the Loop has partnered with professional services firm KPMG Netherlands, which supplies mobile devices to its employees and wanted to be able to show it was consuming technology in an environmentally responsible way, De Kluijver said.

And he noted the concept is starting to garner attention from governments in Europe, such as the city of Amsterdam.

Ultimately, Closing the Loop wants to be able to establish a system in which metals recovered from end-of-life phones are tracked through the recycling process and moved back into the supply chain for new mobile products.

Such an infrastructure at scale is still years away, De Kluijver acknowledged. But he noted that mobile companies are becoming increasingly attuned to the upsides of circular IT.

“I believe the telecom industry is the first global industry that could really become waste free,” De Kluijver said. “The more customers we support, the more waste we can collect. And that allows us to become more and more a metal producer – an urban mining one.”

Photos courtesy of Closing the Loop.