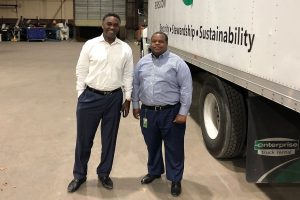 Based on the statistics, Rod McDaniel knows he was unlikely to become the CEO of a fast-growing electronics reuse and recycling company.

Born to a 15-year-old mom, the African-American man grew up below the poverty line in the Sudekum Apartments, a public housing project in Nashville, Tenn. He never went to college.

But while in high school, he obtained certifications to work on computers, and he began job shadowing an IT technician for Metro Nashville Public Schools. That helped him land a job immediately out of high school managing computers and networks for the school district. Later, he got a second job at S3 Asset Management, where he worked for years before he and other investors bought the company.

“Technology saved my life,” the 31-year-old told E-Scrap News recently. “Growing up in the housing projects, the statistics say that more than likely you will not make it out. So technology was one of the things that helped me make it.”

Today, McDaniel leads S3 Recycling Solutions, which provides data destruction, asset refurbishing and remarketing, and end-of-life recycling services for organizations. By weight, about 70 percent of what comes in the door is sold into wholesale or retail reuse markets. Roughly one-fifth of the reusable equipment undergoes light refurbishment before it’s resold. The remaining 30 percent is manually dismantled, and the components are shipped for recycling by Dynamic Lifecycle Innovations, a Wisconsin-based processor with a facility in Nashville.

McDaniel said S3’s robust and fast reporting – both in terms of inventory audit reports and certificates of destruction – differentiates it from competitors. “I think that’s one of the ways that we’re disrupting the electronics recycling industry,” he said.

S3 is growing both in terms of square footage and customer contracts.

Last month, it announced it had purchased a 75,000-square-foot warehouse in Springfield, Tenn., less than an hour’s drive north of Nashville. It moved in last month, leaving its former 7,000-square-foot space in Nashville. S3’s headquarters is still officially in a Nashville coworking space owned by S3 Chairman Darrell S. Freeman, Sr., whom McDaniel described as his mentor.

S3 bought the Springfield warehouse from the Robertson County Economic Development Board for $900,000, McDaniel said. According to a press release, the building was gifted to the county in 2015 by American Snuff. It used to be part of the Conwood Tobacco processing facility.

As part of the deal, S3 committed to creating 25 jobs and investing $2.1 million in Robertson County over the next five years. In exchange, S3 will not have to pay property taxes over that period, McDaniel said.

Shortly after inking the purchase agreement, S3 landed a $1.8 million contract with a health-care provider in North Carolina, McDaniel said.

Under the health-care provider deal, S3 is now collecting at least four truck loads a month from the organization. While that contract was a large one for S3, the company has also signed medium-sized ones recently, McDaniel said. All told, in November, S3 landed deals that will bring in an estimated $2.5 million to $3 million in revenue over the next three years, he said.

S3’s contracts also come as a result of incrementally deepening relationships with customers.

“Typically, we get into a contract by accident, by doing a project here or a project there, and they finally go, ‘Man, you guys are awesome. Let’s do a full-grown contract’,” McDaniel said. “And that’s how we’ve grown.”

Currently occupying about 40,000 square feet of the new facility, S3 has room for additional growth. As of early December, the company has 17 employees and it’s hiring more. McDaniel estimated that within the next six months, S3 will already be halfway to its five-year target of hiring 25 additional people.

It also plans to pursue R2 certification. Based on feedback from a consultant, McDaniel believes S3 could be certified by June 2019.

As far as reasons for the company’s growth, McDaniel pointed to several. He praised his employees, noted that his personal story is compelling and emphasized the goodwill generated by supporting the community. For example, S3 donated 100 turkeys to a school serving low-income students for Thanksgiving.

This year, the Nashville Business Journal named McDaniel as a winner of the 40 Under 40 Awards. A press release announcing the award noted S3’s corporate goal of performing community service projects, including donating backpacks and school supplies to students at Napier Elementary School, just blocks from the housing projects McDaniel grew up in.

“I grew up in the Napier housing projects, and there were quite a few people that would come and help and volunteer their time,” McDaniel told an interviewer earlier this year. “So, when I was a child, I always said to myself if I had the opportunity, I wouldn’t forget where I came from.”