Leaders weigh in on CRTs and other pressing issues 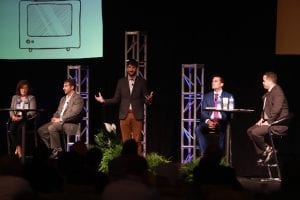 Customers understand they need to pay fair prices for proper downstream management of CRTs, ERI’s Kevin Dillon said. But when he quotes 25 to 35 cents a pound to recycle a printer, they look at him like he’s crazy.

The situation is reflective of a challenge facing today’s electronics recycling industry.

“I think low-grade e-waste is the crisis of our industry right now,” said Dillon, co-founder of the nationwide e-scrap processor.

That was just one takeaway from a wide-ranging opening session at E-Scrap 2018, held in New Orleans Oct. 9-11. The opening plenary, titled “Assessing the Industry’s Vital Signs,” drew a large audience for a discussion covering commodities markets, CRT disposal, future opportunities and more.

The plenary opened with a robust discussion of commodities markets. Lee, commodities research analyst at ISRI, predicted it’ll take some time for markets to stabilize. He touched on how nationalism and global trade issues have created artificial barriers to the movement of recovered commodities, some of which are sensitive to small changes in price. Speculation from large investment funds using metals to protect them from other value drops in their portfolios also creates volatility, he said.

Dillon noted the steep drop in e-scrap commodities values over the course of 2018. But the importance of commodities to ERI’s bottom line is decreasing, he said, noting that while commodities sales used to make up 70 to 80 percent of ERI’s revenue, they now account for 15 to 18 percent.

“Does the decrease have an effect? Yes. Does it have an impact that puts us out of business? Absolutely not,” Dillon said. “Luckily for ERI and hopefully for others, it doesn’t have the impact that it had 15 years ago.”

The industry has shifted, and, today, customers pay e-scrap companies to protect their brand, he said. “We’re not in the commodities business. We’re in the e-waste recycling business, everyone,” Dillon said. He suggested the e-scrap business should continue operating similar to how municipal hauling and recycling companies do: generating most revenue from service charges, not commodity sales. 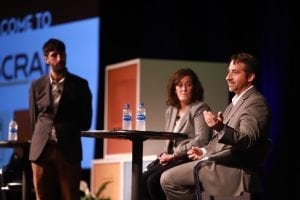 Dehmey, executive director of SERI, noted the wide variety of companies certified to SERI’s R2 standard. The challenge is the industry grew from a base of thinking about which materials can be recovered from electronics, but it has since moved up the reverse supply chain and evolved into a service-based industry. He urged the e-scrap industry to change the conversation with customers to acknowledge that electronics recovery is a service, and there’s a cost to it. At the end of the day, the commodities sales can generate a rebate to offset the cost.

While commodities prices certainly have an impact, MRM sees companies in the sector adjusting.

“I do think in the 10 years MRM’s been operating, we have seen a shift to much less concentration on the commodities affecting our prices,” she said.

Discussion shifted to a device type that has presented problems for the industry in recent memory: CRT displays. The industry has experienced a number of negative headlines from stockpiles, abandonments and illegal exports. A number of downstream recycling outlets have struggled and closed.

Yet speakers said they wouldn’t characterize the state of CRT affairs as “crisis.” Dillon said a lot of people who aren’t in the industry anymore made poor decisions and sent glass to the wrong downstreams.

“It’s not a crisis. It was a bad business decision by some of those operators,” he said.

Conroy of MRM described the situation as “a CRT ongoing concern,” and one that isn’t going away anytime soon. In mature state programs, CRT are declining, but they still make up the bulk of collected material, by far. They’re costly and challenging, she said, and she suspects the industry will continue to see uncertainty in end markets for glass.

But the word “crisis” implies it could be fixed and go away. “It’s just going to be part of the cost, I think, for at least the next 10 years, if not longer,” she said.

Dehmey said he believes CRT processing capabilities have matured. Because there isn’t expected to be a big increase in CRT supplies, he doesn’t think anyone will invest in new processing abilities. As a result, he doesn’t expect prices to come down.

“The red flags for me go up when someone comes in with a better price,” he said. “I don’t think there is really better pricing at this point. I think it’s really mature and that’s the cost, and that’s how we have to price it to our customers.”

To conclude the session, Leif of E-Scrap News asked speakers what they see as the biggest opportunities for the industry in the next five years.

Lee said the biggest opportunity he sees is recognizing recycling is a service. The key way to reach the goal is to create aspirational standards, allowing the innovative nature of the industry to find solutions. 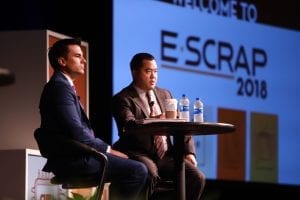 “Let’s allow the market creativity to figure it out and let’s get you paid properly to do it,” Lee said.

Dehmey said that, with a growing and maturing industry, he sees opportunities in quality and efficiency. The business lacks efficiency in logistics, processing, data collection and oversight, and there are a lot of opportunities for processors to recosts and boost quality of both reused devices and recovered commodities.

“I look forward to be a partner in that and continue to develop, from an R2 perspective, a model that drives toward those things,” he said.

Conroy said she believes that growth possibilities exist for companies that remain nimble and innovative. “Really, that’s where the opportunities lie in the coming years,” she noted.