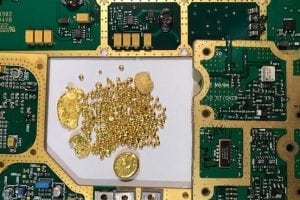 Gold mining is historically important to North Carolina: It experienced America’s first gold rush in the early 1800s, and the Charlotte Mint was built to mint coins from all the gold coming out of the ground.

Carol and Peter Jegou didn’t realize the region’s gold connection when they launched All Green Recycling (AGR) and its precious metals recovery business in Charlotte, N.C. in 2014. But they appreciate it today.

“One of our goals is to bring the gold mining industry back to North Carolina in a very different way,” Carol Jegou, company CEO, told E-Scrap News.

The couple co-founded All Green Recycling, which developed an environmentally friendly process for recovering precious metals from printed circuit boards (the company is separate from Tustin, Calif.-headquartered All Green Electronics Recycling). AGR, which recently attained B Corporation certification, uses a hydrometallurgical technique to recover gold, silver, platinum and palladium.

“At the end of the day, we know that this whole process and what we’ve developed is incredibly good for the environment, so we’re excited about it,” Carol Jegou said.

The facility can handle between 40,000 and 50,000 pounds per month of printed circuit boards (PCBs). The company works out of a 25,000-square-foot space. To date, AGR has produced 100 different lots of material.

The PCBs are not shredded before they’re immersed in a reagent in a vessel. The company’s website describes the technology as an “alkaline hydro metalingual” process. The resulting precious metals-bearing concentrate is then further processed in the company’s in-house refinery. The solvents are reusable.

The Jegous emphasized the environmental benefits of the technology, which uses no cyanide. “There’s no air emissions. There’s no discharge,” said Peter Jegou, who serves as company president. “It’s a continuous closed-loop process.”

AGR produces 99 percent pure gold and silver for sale into commodity markets; an outside refiner currently processes AGR’s palladium- and platinum-containing materials to extract those valuable platinum group metals, but AGR is finalizing technology to recover those metals in-house. The company markets itself as an alternative to overseas smelting of e-scrap and metals mined in conflict zones.

In 2015, Carol Jegou started the AGR Foundation, which provides vocational training to adults with barriers to employments through their hiring and training at AGR. Over the past four years, they’ve hired and trained 14 people through the program, some of whom have gone on to other positions in the e-scrap industry.

“It’s been very rewarding,” she said.

Last year, AGR attained B Corporation Certification, which means it meets high standards for social and environmental performance. “It’s a very arduous process,” Carol Jegou said. “It’s not for the faint of heart. It took a very long time and a lot of weekend work to accomplish the certification process, the documentation, the interviews, all that goes into become a certified B Corp.”

In June, AGR issued a press release noting that it landed on B Lab’s 2018 Best for Environment list. That meant it was within the top 10 percent for B Corp scores in the environment category.

“We were thrilled beyond thrilled about that honor,” she said.

Below is a slideshow of photos from All Green Recycling. Hover over the image to see arrows that will allow you to advance through the photo set. 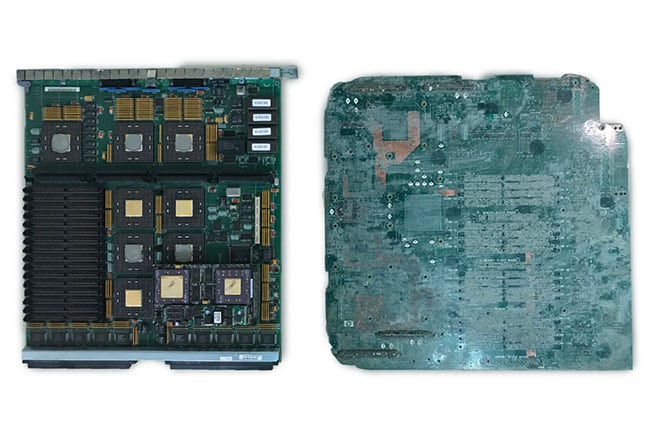 Circuit boards before and after processing. 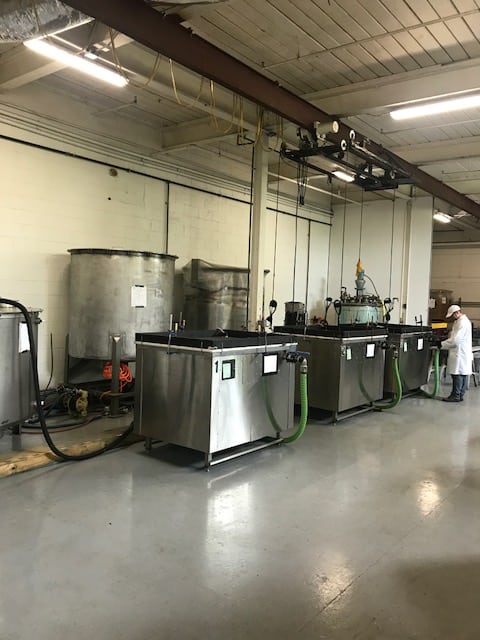 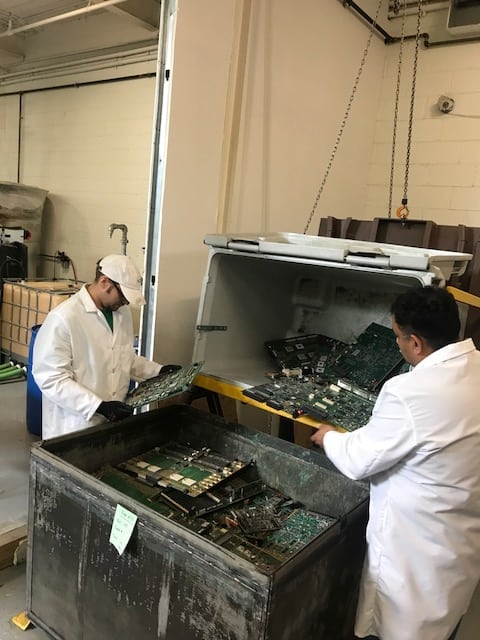 Final inspection of circuit boards before processing. These baskets are loaded into custom-designed processing tanks. 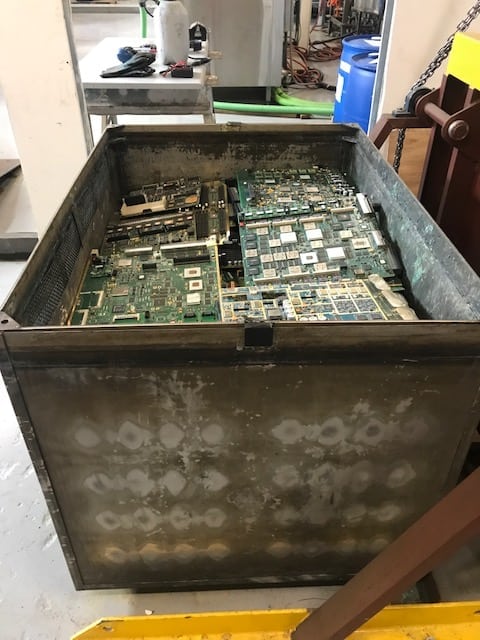 Circuit boards being loaded for processing, no shredding required. 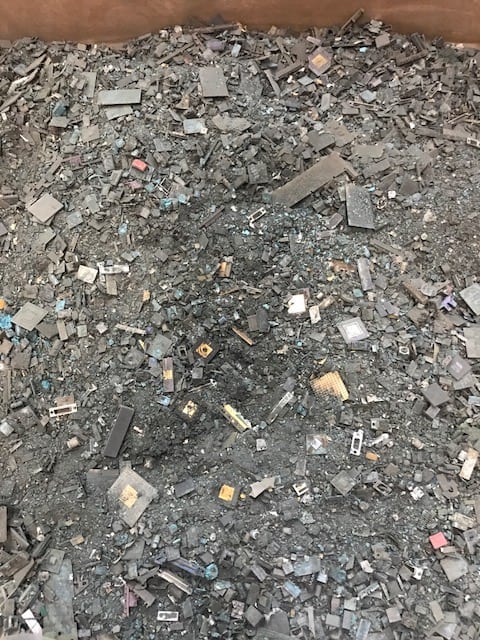 Precious metal-containing material after processing. This material is sent to the in-house refining operation. 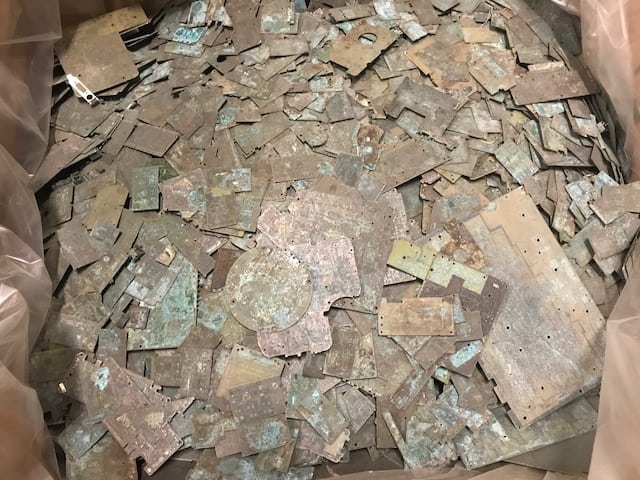 Bare circuit boards after processing, free of all precious metal-containing material. The boards are ready for copper recovery. 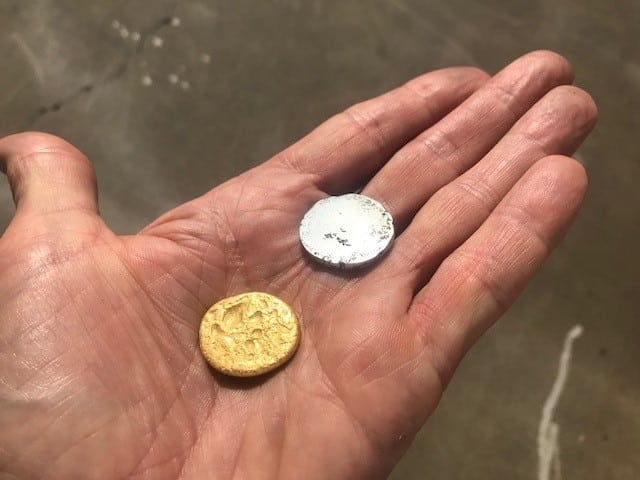 The final gold and silver product.

Photos courtesy of All Green Recycling