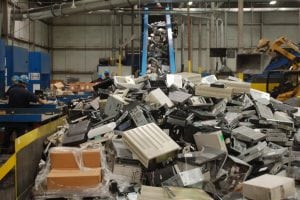 ECS, a nationwide e-scrap processor and IT asset disposition (ITAD) services provider, closed at the end of June, putting hundreds of employees suddenly out of work and leaving inventories of material sitting in leased facilities across the country.

ECS filed for Chapter 11 bankruptcy in late April to head off a takeover by creditor SummitBridge National Investments V LLC. A trustee appointed to run ECS, Donald Gieseke, was unable to find a buyer for the intact, operating company. He permanently closed ECS after SummitBridge, which has a secured claim of nearly $26 million, opposed allowing him to continue operating at substantial losses while he looked for a buyer.

ECS had locations in Arkansas, California, Ohio, Oregon and Texas. The company had three main categories of inventory: business electronics collected through its asset management services (AMS) business, consumer devices for processing through the state recycling program (referred to as SB 20 inventory), and other end-of-life electronics inventory.

Court records haven’t provided an estimate of how much material is stored across all locations. E-Scrap News couldn’t reach Gieseke or his attorneys for comment.

For those assets, Dynamic agreed to pay $160,000, of which $40,000 has already been deposited with the trustee. On top of that, Dynamic would pay another $30,000 if it can land a deal with Comcast, one of ECS’s customers, and two of ECS’s other top four customers within 45 days.

“The proposed transaction will assist the Trustee in clearing out various leased premises of Debtor’s property as well as minimizing issues with Debtor’s customers related to concern about inventory with confidential information,” according to Gieseke’s July 13 approval request to the judge.

One of Gieseke’s attorneys, Paul Pascuzzi, told Bardwil during a July 11 hearing that AMS business customers are particularly concerned that their old devices’ data is properly destroyed.

The purchase agreement indicates Dynamic could still be outbid for the assets.

Additionally, other e-scrap companies have expressed interest in buying ECS assets. The owner of Reserve Management Group (RMG) attended a recent court hearing. Also attending was an RMG attorney, who told the judge his client is a potential purchaser. Regency Technologies, an e-scrap processor with facilities across the country, is part of RMG.

Another development concerns environmental regulation at ECS’s California sites. In addition to the Stockton location, the processor had facilities in the California cities of Santa Clara and Santa Fe Springs.

California Department of Toxic Substances Control (DTSC) staff made clear in recent days their approval is needed for any cleanup plans. The department had been omitted from the list of parties receiving copies of court filings and only recently become aware of developments in the case.

During a July 17 court hearing, DTSC attorney Margarita Padilla expressed concern the trustee had already filed a motion to cancel ECS’s facility leases and had been working, without DTSC involvement, on ways to clean out the buildings. DTSC inspectors recently got access to ECS’s Stockton location, and they’re working with the trustee to look around other ECS sites.

“There’s a substantial amount of regulated waste at that facility,” Padilla told the judge. “Some is electronic waste. Some is hazardous waste. … There’s evidence of metal dust, probably lead dust, there’s evidence of that in the workrooms where waste was shredded or dismantled. So it’s troubling to DTSC that untrained professionals in health in safety would be going into those areas of the facility where they could be exposed to lead dust or metal dust.”

The Texas Commission on Environmental Quality had also been left off the list of parties served with bankruptcy papers, and staff with that agency are working to get a handle on the Mesquite facility, Padilla said.

During the July 17 hearing, Gieseke told Judge Bardwil he hopes to work with regulators to get a cleanup plan written by Aug. 8, the date of a hearing in the case. Bardwil signed the order allowing Gieseke to spend additional cash for a number of closure-related tasks, including drafting the cleanup plan.

Paying for a cleanup

Finally, landowners in various areas are worried the ECS case will drag on and they’ll be left with cleanup costs.

The owner of ECS’s Santa Fe Springs warehouse, Prologis, filed an objection on July 13 asking Bardwil to require the trustee to clean out its property by July 30. Prologis estimates its property has three 55-gallon drums with various lead-containing materials and other components, 60 pallets holding e-scrap that was awaiting processing for payment from the state recycling program, and an additional 15 pallets of other material.

David Weitman, an attorney for Prologis, expressed his frustration with the trustee during the July 17 hearing. “We have had no plan to remove the inventory or the hazardous waste that’s been created by the Chapter 11 trustee on his watch,” he said. “We haven’t gotten the records as to who dropped off stuff on our site, nor the bond information.”

Judge Bardwil declined to attach conditions to the spending approval, while expressing sympathy for the landlords. “Everybody wants a piece of the pie. The pie’s not big enough,” Bardwil said. “And Summit has guard over the pie. It’s Summit’s cash collateral.”

“The trustee is operating on such a tight budget it’s really putting out one fire after another,” he added.

ECS received payments from the California Department of Resources Recycling and Recovery (CalRecycle) for processing devices covered by the state recycling program. In fact, it was the single largest processor in the program, according to CalRecycle. Last year, it submitted claims for 30 million pounds, 24 percent of the total weight claimed, and was paid $14.8 million by CalRecycle, said Mark Oldfield, CalRecycle spokesman.

Gieseke said he plans to submit additional claims worth an estimated $1.7 million, money that will help pay for cleanup. He also noted that bonds posted with the state of California could be tapped to reimburse cleanup costs.

The bonds appear to have their own challenges, however. Padilla said that, in California, only the Stockton and Santa Clara facilities have cleanup bonds, and the money can’t be used for other locations.

At least some landlords fear they won’t be enough. Luke Hendrix, an attorney representing Sinclair Partners LLC and ECS Big Town LLC, which own the Stockton and Mesquite facilities, respectively, told the judge his clients “have significant concerns that the bonds are sufficient to cover the cost of disposing of this material.”

Want more of our exclusive analysis? Subscribe to the print edition … for free!