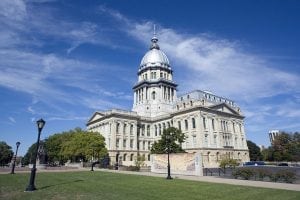 Legislation supporting retrievable storage as a downstream outlet for CRT glass has advanced in Illinois, and certification standards organizations are concerned – one may even consider withdrawing its program from the state.

Illinois House Bill 1439, which has been approved by the legislature, stipulates that recycling operations that send CRT glass into retrievable storage cells do not need “accreditation” by certification standards, including e-Stewards and R2. Under Illinois law, e-scrap processors that handle material collected through the state program must be certified to one of the standards.

But the bill also includes a provision stating the certification standards are “prohibited from penalizing or taking other negative actions against” a processor that uses the retrievable cell option.

“This sentence forces R2 to allow the placement of CRT glass in a landfill, even though R2 prohibits landfilling of recyclable materials,” said John Lingelbach, executive director of Sustainable Electronics Recycling International (SERI), in a statement to E-Scrap News. SERI administers R2.

“BAN’s concern with the Illinois law therefore is not about the state’s seeming endorsement of this disposition method, but rather their method of doing so,” he said in a statement. “Voluntary industry certifications should be allowed to decide to go further than the law. That is a major role and purpose of certifications.”

The bill unanimously passed both chambers of the state legislature and is now awaiting a signature from the governor. It was sponsored by Rep. Jehan Gordon-Booth, D-Peoria, whose district includes Peoria Disposal Company (PDC), which provides the CRT storage.

Illinois lawmakers in 2015 approved allowing retrievable storage as a downstream outlet for CRT glass handled through the state program. PDC operates the storage cell process at its landfill in Peoria, Ill.

In recent years, CRT glass has become a costly material for many recycling entities to handle. The storage concept has been presented as an option to ensure glass does not end up abandoned in warehouses. Kuusakoski, which treats CRT glass before sending it to the PDC storage site, has said the glass could be retrieved once more markets are developed for it.

The language in House Bill 1439 suggests certification standards would be prohibited from decertifying companies that use the storage option, even if that method goes against the standard criteria.

Lingelbach noted that SERI’s R2 technical advisory committee (TAC) has been deliberating on whether the storage method constitutes recycling. Although its findings have not been officially published, Lingelbach said the committee seems to be leaning toward not allowing the retrievable cell process for R2-certified recycling companies.

He stressed that R2 is an international standard with certified companies in 49 states and 30 countries, and that it’s important to provide a consistent set of requirements across all of those jurisdictions.

“If HB 1439 becomes law, there may be no choice but to pull the R2 certification program out of Illinois,” Lingelbach said.

Puckett said the concept behind the law “seems to us to be a dangerous precedent of government overstepping the rights of citizens and, indeed, used in other ways in the future and by other governments, could seriously harm the use of certifications to improve the environment, human rights, education, labor rights and a whole host of other issues.”

The administrators of e-Stewards and R2 fought the legislation during previous sessions. In 2016, they hired a lobbyist who alleged the bill was unconstitutional. During the recent session, the groups did not actively lobby against the bill – no opponents were listed as offering testimony – but their concerns remain as strong as ever.

Lingelbach said the bill is “bad policy, bad precedent” and will have unintended consequences.

“It is bad precedent because, if found to be legal, it opens the door for legislation altering the requirements of other voluntary, private certifications like those of the American Board of Surgery and the UL electric standard(s),” Lingelbach said.