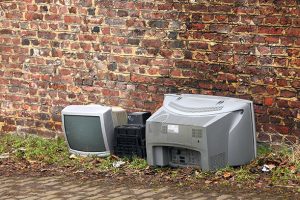 Despite having a landfill ban in place, problems have plagued electronics recycling in Colorado for years, and stakeholders are working to find a solution.

The Colorado Association for Recycling (CAFR) will hold a roundtable discussion this month, bringing together industry members to talk about ways to solve the lack of electronics recycling options. The talk is titled “E-Waste Recycling – What’s Missing?”

Colorado enacted a landfill ban on many electronic products in 2012. But there is no state program ensuring funding for collection and processing, which has left the state with spotty recycling availability. And there is a lack of processors to handle material locally, meaning much of it must bear transportation costs.

CAFR played an instrumental role in getting the ban passed; however, Laurie Johnson, the organization’s executive director, said the necessary infrastructure hasn’t come about in the six years since.

“Policy timing is critical in terms of how it lines up with your development of infrastructure and end markets,” Johnson said.

The state didn’t follow its landfill ban with an extended producer responsibility (EPR) system, as some states have done, nor did it enact a point-of-sale fee, as California has done. It’s only one of three states in the country with that type of setup. The others are Massachusetts and New Hampshire.

“There’s no financial reserves to subsidize collection, or processing or anything,” she said. “That’s really part of our problem.”

Particularly in rural areas, where there are very few collectors, let alone processors, residents are left with few legal options but to haul material to Denver.

“There’s a lot of illegal dumping in the rural areas,” Johnson said. TVs, computers and other electronics end up dropped off late at night in front of a recycling center, landfill, Goodwill center, or even on the side of the road.

Public dumping is not the state’s only e-scrap problem. With a shortage of recycling options, Colorado – like many states – has attracted unscrupulous companies that stockpile materials. “They dump the e-waste, charge for it and abandon the warehouses,” Johnson said. Then, cities or counties are left with sizable cleanup costs.

There’s also no monetary assistance for recycling outreach and education, so some residents don’t know that the materials can’t be disposed of.

Stakeholders have proposed several fixes over the years, and CAFR is focusing on a few main ones for next steps. Education, and the funding it needs, is a top priority. But equally important, CAFR is looking at how the state can boost processing infrastructure to reduce freight costs.