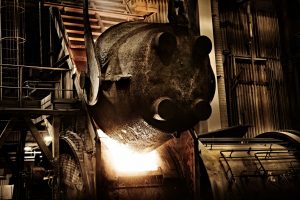 A smelter owned by metals company Boliden processed 77,000 metric tons of scrap electronics last year, down 6 percent from the year before, according to recently released data.

Boliden, a mining and smelting giant with facilities across Northern Europe, operates the Rönnskär smelter in Sweden. The facility began processing metals-containing components of e-scrap in 2012, making the company among the world leaders in e-scrap recycling, according to Boliden. The Rönnskär smelter is a downstream for North American-generated material.

The 77,000 metric tons of scrap electronics processed by the facility last year was the lowest weight since 2011, according to the company’s annual report. It was down from a high of 109,000 metric tons in 2013. Last year, scrap electronics made up about 9.5 percent of all copper-bearing inputs, virgin and recycled, at the Rönnskär facility. That was down from 10.3 percent the year before.

The Rönnskär smelter uses what’s called a Kaldo furnace, which was initially developed by the steel industry in the 1940s but has been adapted by Boliden for e-scrap. The furnace is a slightly leaning cylinder that rotates. Material is fed in and tapped out through the mouth of the furnace. The e-scrap plastics burn and provide all the energy needed for smelting of the metals. The material is then integrated into the smelter’s main copper flow for further separation and refining into copper, gold and silver, according to Boliden.

Boliden has five smelters in Norway, Sweden and Finland. Across all those facilities, 12 percent of feedstock is recovered material, including electronics, construction and demolition debris, automotive batteries and more.