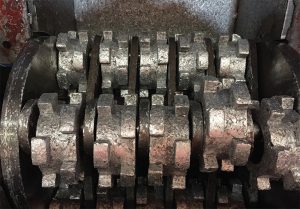 Two electronics recycling companies recently ended disputes with California regulators that centered on the handling of metal-laden dust from e-scrap shredders. The situation raises debate about what material should be labeled hazardous.

The two firms have denied any wrongdoing but will nonetheless be paying hundreds of thousands of dollars to the state.

While each case has unique details and allegations, both involve the management of what’s called baghouse dust. That substance is a mixture of particles of metal and other materials that’s created in the shredding process and then stored in a shredder’s baghouse.

Precious metals as well as copper, lead, zinc and other metals can be present in the dust.

“It’s definitely an issue for the industry in California,” Steve Skurnac, president of Sims Recycling Solutions, told E-Scrap News. “Other states don’t regulate it anywhere near as tightly as California does. California takes a very, very aggressive view of shredding of electronics and the products that are generated from shredding of that material.”

Sims Recycling Solutions, which is a division of publicly traded Sims Metal Management, operates e-scrap sites around the world, including seven U.S. locations.

The Sims case involves a large shredding and separation system that SRS used to operate at its 200,000-square-foot Roseville, Calif, facility. SRS sold baghouse dust from the equipment to a smelter in Canada for metals recovery.

According to a DTSC press release, the violations included “the illegal treatment, storage, transportation and disposal of hazardous waste containing mercury, copper, lead, nickel, and zinc, among other compounds, and failure to operate its facility in a manner to minimize the release of hazardous waste.”

Skurnac told E-Scrap News Sims and California’s toxics control agency have different interpretations of hazardous waste laws. Sims believes the dust doesn’t have to be managed as hazardous waste – a classification that brings with it additional administrative requirements and costs – as long as the facility proves it’s shipping the dust to an approved destination. During the 2011 inspection, DTSC officials told Sims state officials had changed their interpretation of that “excluded recyclable material” provision and decided the dust was a waste, Skurnac said.

The 2015 disagreements revolve around a misting system Sims installed to keep workers at the Sacramento-area facility cool during the summer and remove residual dust in the air, Skurnac said. DTSC said the mist was interacting with and treating the dust, yet Sims didn’t have a permit to treat it.

“It was an impasse on not being able to agree on the interpretation of ‘treatment’ or ‘non-treatment’ in that circumstance,” Skurnac said.

To avoid protracted litigation, the parties reached the settlement and filed documents with the Sacramento County Superior Court for approval. A judge signed off on it on Nov. 29.

Of the $400,000 Sims is paying, $275,000 is considered a penalty and $125,000 will go toward the state’s costs of investigating and pursuing enforcement. The DTSC will probably receive the check in the mail by Christmas, Skurnac said. Sims also issued a press release about the deal.

Sims no longer operates the shredding and separation system at the facility, which now focuses on IT asset management services. The shredder was shut down about 18 months ago because of market conditions at the time, Skurnac said.

DTSC inspected the facility in 2016 and 2017 and found no violations, according to the settlement document.

Meanwhile, DTSC and processor CEAR settled their case in August and a judge approved the deal in September. Of the $390,000 CEAR will pay, nearly $300,000 is for penalties and the remainder for DTSC’s costs.

The Mather, Calif.-based company installed a MeWa shredder near the end of 2010 and began testing it during the first quarter of 2011. “Much of it was a learning curve, for both recyclers and the DTSC,” company spokeswoman Kristin Dilallo told E-Scrap News.

DTSC’s allegations regarding hazardous waste violations stem from inspections in 2012, 2013 and 2014, according to an agency news release.

Dilallo noted the company has a good relationship with DTSC and other state regulatory agencies such as the California Department of Resources Recycling and Recovery (CalRecycle). She said the company has learned a lot of lessons from the violations from DTSC. Still, the company took issue with some DTSC allegations.

CEAR believes the baghouse dust contained valuable precious metals, said Paul Gao, company president. After installing and testing the shredder, the company began sending the baghouse dust to a refinery in Japan, he said. Although that practice didn’t cause any issue during the first inspection in 2011, it drew scrutiny when inspectors returned in 2012.

Similar concerns arose around the company’s handling solar panels. That led CEAR to stop accepting the materials altogether. And instead of shipping the baghouse dust to Japan for refining, CEAR now sends it to a hazardous waste landfill.

“We know they contain valuable materials, but we don’t want to be in the way. We don’t want the hassle,” Gao said. “So we said, ‘Okay, forget it.’”

DTSC also alleged there was hazardous dust on the floor of the facility.

The violations have led to procedural changes, Dilallo noted. Workers perform full plant sweeps of the floor at the end of each shift now. In addition, no e-scrap is stored directly on the floor; the company built large metal containers to hold material. The state did not find any violations during its inspections in 2015 and 2016.

“It improved our housekeeping, for sure,” Dilallo said. “Our facility is pretty pristine now.”