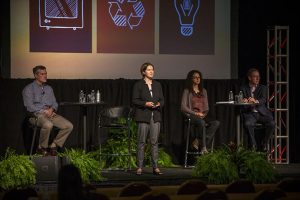 Sarah Murray of the Wisconsin Department of Natural Resources speaks at E-Scrap 2017.

When it comes to CRT management, the profit is shaky and the industry is littered with horror stories of stockpiles and legal battles to determine who pays for cleanup.

But a company can take steps to avoid those pitfalls if it completes its fair share of due diligence and then some, according to an expert who spoke during a session at E-Scrap 2017 titled “Bearing the Weight of CRTs.”

“If you’re not familiar with the risk, don’t be in this business as a collector,” said Joe Connors, vice president of business development for Greensburg, Pa.-based CyberCrunch.

The session, moderated by Jeff Bednar of the Pennsylvania Department of Environmental Protection, also touched on current regulatory changes, as well as the downstream outlets available for CRT management.

‘Caught in the middle’

Connors offered perspective from a private sector CRT collector, including some tips to avoid the risks of the business. The key downfall that can trip up a collector is its downstream, Connors said, specifically determining whether it’s legitimate.

“Go and visit, identify what they’re doing with it, so you are knowledgeable with it,” Connors said.

Continuous monitoring of a company’s downstream outlets is essential, he said. If trouble arises and a company doesn’t take note, it could lose money in the eventual fallout.

“My suggestion as a collector is don’t get caught in the middle,” Connors said. “That’s a recipe for disaster.”

Once a stockpile or downstream collapse occurs, collectors can get tangled in the cleanup, which can turn into a messy process. Connors described phone calls he receives from landlords who are stuck stockpiles from failed CRT outlets and are looking to get it cleaned up. But often, they don’t grasp how that works.

“When they find out there’s a cost, they just hang up the phone,” he said. “Fact of life, that will not change.” 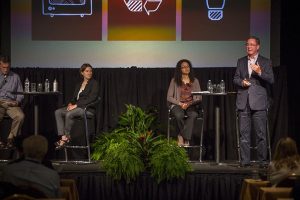 Connors advised companies to communicate with the agencies regulating CRT recycling. They can help companies become familiar with the law, as well as determine the legitimacy of a downstream.

“It is a quagmire out there,” he said. “It is very, very difficult to understand.”

Sarah Murray of the Wisconsin Department of Natural Resources identified some of the factors that contribute to industry risks in her state’s recycling program.

Under Wisconsin law, manufacturers of TVs, computers, monitors, printers and other devices register with the state and are assigned a weight-based recycling target. The target, which prescribes how much material they must pay to collect and recycle, is 80 percent of the weight of products sold during the given sales period.

CRT TVs have dominated Wisconsin’s recycling stream for the past five years and made up 60 percent of the weight of collected devices during the most recent program year. CRT computer monitors, on the other hand, have substantially dropped off, from 20 percent of the stream when the program began to about 5 percent currently.

Wisconsin does not mandate free CRT recycling for consumers, Murray said, meaning recycling companies can charge fees to collectors, who can, in turn, pass them on to consumers.

“At the consumer level, there’s virtually no place in the state where you can recycle a TV for free,” Murray said. “There’s just a few communities, maybe, that are still subsidizing the cost.”

Rising costs have led consumers and smaller collectors, including local governments, to seek cheaper “alternative” outlets for CRTs to avoid paying the fee. “If not outright illegal dumping by consumers, then finding low-cost recyclers,” Murray said.

In Wisconsin, those low-cost alternatives have led to CRT stockpiles requiring costly cleanup and environmental remediation.

Another challenge is monitoring and tracking the CRT glass and its source. Recycling companies might receive CRTs from in-state and out-of-state, and it often gets mixed together during the processing phase. That means it’s difficult to determine the upstream source of CRT glass once it’s been processed and sent to a downstream outlet.

When a CRT stockpile develops, the lack of tracking information presents problems in holding upstream players accountable for the material.

The program also has challenges determining what constitutes “recycling” when it comes to CRTs. Per state statute, recycling means “preparing eligible electronic devices for use in manufacturing processes or for recovery of usable materials and delivering the materials for use.” Although that makes it clear land disposal is not recycling, it leaves some other avenues ambiguous. And in many cases, the department can’t visit the downstream outlet to witness firsthand whether it’s legitimate or not – many are overseas – leaving it to evaluate as best it can from afar and rely on guidance from the U.S. EPA.

The department has drawn a hard line against allowing long-term storage to count as CRT recycling.

“By that, we often mean a process that’s not up and running, that says they need to accumulate feedstock,” Murray said. “If it’s just going to be going and sitting in storage for a few years, we’re saying manufacturers can’t get credit for that.”

What are the CRT outlets?

Four years ago, Wisconsin’s e-scrap program began asking its recycling contractors about their downstream CRT outlets, and the responses have produced a timeline of how CRT processing has changed. When the surveys began, the majority of respondents said they sent CRTs for glass-to-glass use.

“Almost every recycler we had was using them for at least some of their glass under the program,” she said.

But that changed the following year, when glass-to-glass began drying up and there was uncertainty about Videocon’s future.

The majority of CRT glass has gone to tile manufacturing during the past two program years, Murray said, to Camacho Recycling in Spain and to Brazil, through Com2 Recycling Solutions.

Smelting has been a fairly steady outlet, Murray said. Doe Run was taking Wisconsin’s CRTs for smelting when the program began, she said, but Glencore Recycling is now its primary outlet. Doe Run continues to take CRTs from other programs.

Other downstream outlets include aggregate made from CRT panel glass and concrete blocks incorporating CRT glass, as is being done in the Netherlands.

Domestically, CRTs are not considered hazardous waste as long as they are sent to a smelter or glass-to-glass manufacturer and are not speculatively accumulated, explained Lia Yohannes, from the EPA’s Office of Resource Conservation and Recovery. But there are limited domestic outlets for CRT materials, as Wisconsin’s program has demonstrated through information it’s compiled for the past few years.

Under the revisions, completed last year, exporters have to file information for each CRT shipment, detailing the destination country and its consent to receive the materials.

“This is going to improve our ability to track exports on a shipment-by-shipment basis,” Yohannes said.