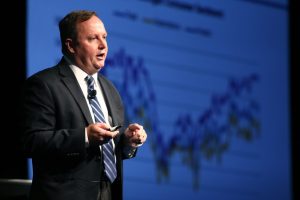 Ferrous and non-ferrous metals recovered from electronics and other sources have been volatile of late. Such uncertainty could continue as China considers limits on taking in some metal grades.

That’s according to a presentation from Joe Pickard, chief economist and director of commodities at the Institute of Scrap Recycling Industries (ISRI). He took to the stage at Resource Recycling Conference 2017 last month to talk about scrap metal markets.

The concern comes as prices for aluminum and copper fluctuate. At the time of Pickard’s talk in late August, aluminum prices had increased 23 percent from the end of 2016 and sat at around $2,100 a ton, Pickard said. Copper values had increased by 22 percent over that time to about $6,700 a ton, or over $3 a pound.

“These are multi-year highs for most of the base metals,” Pickard noted.

The price of lead had also increased 18.5 percent since last year. As of late August, it sold for nearly $2,400 a ton.

But in the last several weeks, markets for some of these metals have dropped.

Part of the rise in prices through the first eight months of 2017 had to do with expectations for improving demand from China, and part is due to the weaker U.S. dollar, which makes prices for U.S. commodities more attractive compared to those purchased in other currencies, Pickard said. During the first six months of this year, aluminum scrap exports from the U.S. were up 11.5 percent, compared to the same period in 2016. Exports to China, which receives the bulk of U.S. aluminum scrap shipments, were up 13.0 percent. For copper and copper alloy, total U.S. exports were up 11.6 percent, and China, which gets most of it, consumed 13.4 percent more.

According to Reuters, projections from analysts suggest aluminum might trade on the London Metal Exchange for $1,900 a ton during the fourth quarter of this year. Their prediction for copper is $5,700 a ton.

At least half of all U.S. aluminum scrap exports are sent to mainland China (not including Hong Kong). For copper and copper alloy grades, the percentage of exports going to mainland China is 70 percent, Pickard said.

China is currently proposing a contamination allowance for metals imports of just 0.3 percent. ISRI has submitted comments to the Chinese Ministry of Environmental Protection and the World Trade Organization asking for more clarity and expressing concerns.