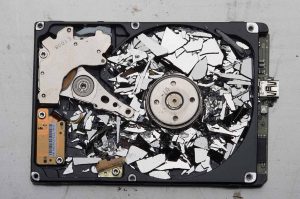 Scientists have developed an environmentally friendly way to recover rare earth elements from shredded electronic scrap without the need for pre-sorting of materials.

Researchers at the Critical Materials Institute (CMI) found a way to dissolve rare earths metals, which are used in hard drive magnets, using an acid-free solution. The process recovers high-purity rare earths for recycling, while also preserving the ability to recover the leftover copper, chromium, nickel and other materials.

“The difficulty with traditional hydrometallurgical methods for rare-earth magnet recycling is that they rely on the use of hazardous mineral acids, and this presents a number of problems from an economic and environmental standpoint,” lead researcher Ikenna Nlebedim stated in a press release. “It produces toxic fumes; the acids need to be contained, and so do acid-contaminated wastes.”

Using the technology, researchers extracted rare earths from shredded hard drives without pre-sorting or concentrating the magnet content. The process did not produce fumes.

CMI is a project of the U.S. Department of Energy, which has been funding projects to recover rare earths from scrap electronics. China supplies most of the world rare earths and, in the past, has set limits on exports. Because of national security implications, the U.S. Department of Defense has also been funding efforts to recover rare earths. Texas-based Urban Mining recently announced it received $1 million from the Defense Logistics Agency for its work recycling rare earth magnets from electronics.

The U.S. EPA has also recently recognized research into recycling them, because extraction of raw rare earths is energy intensive and environmentally damaging.