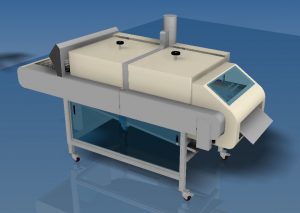 After receiving $400,000 from the federal government, a New York company is developing a mechanical system that could help e-scrap companies handle printed circuit boards more profitably.

Advanced Recovery & Recycling (ARR), based in Syracuse, N.Y., is in the process of building out a “depopulator” machine that uses heat and vibrations to separate precious metal-bearing chips from the less-valuable body of circuit boards.

The company has received two phases of funding from the U.S. EPA’s Small Business Innovation Research (SBIR) program – it was awarded $100,000 in fall of 2015 and then another grant of just under $300,000 earlier this year.

The startup used the first sum to develop 3-D drawings of the equipment concept and the latest funding is being leveraged to build a working model of the machine.

The leaders of ARR say that by employing the firm’s depopulator technique, which is patent protected, e-scrap operators would significantly reduce the volume of shipments to smelters and refiners. This would result in notable cost savings.

The process could carry environmental benefits as well: If smelters use less of the overall circuit board in their furnaces, they would theoretically reduce carbon emissions.

It’s that potential to cut pollution that drew the attention of EPA decision-makers. Many circuit boards collected from end-of-life electronics in the U.S. are sent to smelting operations in Asia, Canada and Europe.

In a statement, a spokeswoman for the EPA SBIR program said ARR received the funding for its “novel e-waste recycling technology that reduces pollution while recovering valuable materials from circuit boards.” The spokeswoman added, “ARR is also working with local businesses to implement their technology in the field, spurring job growth.”

ARR was established in 2014 by Stockmann and Byron Tietjen, who serves as the company’s president. Both partners have worked for decades in the engineering field. A friend of Tietjen’s initially developed the circuit board depopulator concept and asked Tietjen, who worked previously at GE and Lockheed Martin, to help him push it forward.

The partners said the machine takes in whole boards at one end and exposes the material to heat before moving it to a vibration stage. Together, these processes free chips from the rest of the board.

Current plans call for the equipment to operate in two different modes. In the first, boards would be exposed to heat around 800 degrees Fahrenheit, a level that would enable separation to happen quickly.

The second mode would be aimed at reuse and would only expose material to temperatures in the 350 to 370 degrees Fahrenheit range. This would allow for separation of chips but would also allow them to be reintegrated into applications such as radar. Such systems may run for decades, but the chips needed to underpin the technology may no longer be in production.

The company aims to have its first version of the depopulator built by this fall. The initial model will have a footprint of around 7 feet by 3 feet. Tietjen said it’s too early to say exactly what the price of the technology would be for processors. He added that development of the prototype will be key to moving the system out into the industry.

“Right now, we’re looking for investors,” he said. “We’ve had some interest, but people wanted to see this working.”