Lightweighting trend on display in Washington 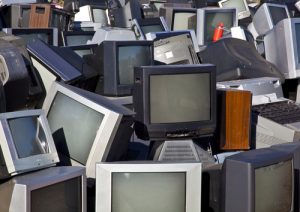 TVs dominate the end-of-life stream in Washington state now more than ever. They just don’t look like they used to, with fewer CRT devices and more flat-panel displays coming in the door.

Recently released data for the Washington State extended producer responsibility program for electronics provides a glimpse at the changing e-scrap stream. Along with less overall weight collected, the Washington stream includes less CRT glass weight from TVs and monitors and a greater percentage of metals, e-plastics and printed circuit boards.

Across the U.S., the composition of new and end-of-life electronics is changing fast. An analysis by the Rochester Institute of Technology, Consumer Technology Association (CTA) and Staples Sustainable Innovation Lab found that a couple of years after U.S. households essentially stopped buying CRT TVs and monitors, roughly in the 2006-07 timeframe, the weight of all CRT glass entering the end-of-life maxed out. Since that peak about seven years ago, CRT glass has continued to fall as a component of the stream.

One nationwide e-scrap expert noted the billing implications of a changing stream.

“It’s going to make the industry have to think differently about how they charge for their services,” said Jason Linnell, executive director of the National Center for Electronics Recycling (NCER).

Data from the Washington Materials Management and Financing Authority (WMMFA), which works to fulfill electronics manufacturers recycling obligations in the Evergreen State, shows TVs last year made up more than 83 percent of the stream by weight. That was the greatest percentage since the Washington E-Cycles program started in 2009.

But looking at materials instead of types of devices, CRT glass makes up less and less of the weight collected. In 2016, CRT glass fell to less than 43 percent of the stream’s weight, down from nearly 50 percent two years earlier.

“It’s a pretty simple relationship. Obviously, CRTs are declining and the flat-panel LCDs are increasing,” said John Friedrick, executive director of the WMMFA.

The decrease in CRT glass has meant a greater percentage of the stream now consists of metals (23 percent), e-plastics (17 percent) and printed circuit boards (12 percent). The remaining 5 percent consists of a mix of materials, including wood, batteries and mercury.

In March, Friedrick told the WMMFA board he expected the weights collected to continue falling by 6 percent to 8 percent in 2017.

Linnell said the reduced CRT weights are showing up in more mature programs such as in Washington and Oregon but not yet in some of the newer East Coast ones.

“Eventually they will look like this after several years,” he said.

In Oregon, citing a changing stream, state officials recently approved 2018 recycling targets that were 22 percent below the 2017 obligations.

From a cost perspective, Linnell noted that, in general, a shift from CRT weight toward flat-panel weight can be a doubled-edged sword. On one hand, processors have less leaded glass to send downstream, saving money. On the other hand, more disassembly labor and mercury lamp downstream costs may eat into those savings.

And, with fewer pounds overall, processors may need to change how they charge for services, beyond simply increasing their cents-per-pound charged. Linnell noted that a high number of tablets that have been sold in recent years will enter the end-of-life stream.

“That’s going to make the recyclers have to think twice about how they’re charging for the recycling service that they’re providing,” he said. “I don’t think you’d want to charge a per-pound rate on a one-pound tablet.”