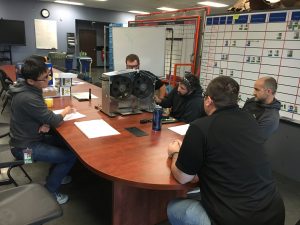 Global e-scrap firm Sims Recycling Solutions has launched a subsidiary that aims to optimize processing plants, including those run by Sims competitors.

Converge Engineering will be led by Rafael Reveles, the former engineering and technical director at Sims Recycling Solutions (SRS) and equipment expert. In an interview, Reveles said the new company has received the strong support of SRS leaders to fill a perceived hole in the e-scrap marketplace.

“We’re delivering all-encompassing, holistic engineering solutions from an operator’s point of view,” Reveles said. “If someone wants to build a plant, improve one, add onto it, whatever it is, we can internally provide all of that to them.”

SRS is a division of publicly traded Sims Metal Management, which is based in Australia. SRS currently operates seven U.S. facilities; 14 in Europe, Africa and the Middle East; and eight in the Asia-Pacific region.

Converge will begin by focusing on the U.S. The company, which currently has 23 employees, is primarily working out of SRS’ existing plant in Roseville, Calif. Reveles, who will serve as the company’s president, noted Converge also has employees in Los Angeles, Illinois and Baltimore.

Converge is already working with a handful of companies on projects, which range in size and scale and include some of SRS’ competitors, Reveles noted.

“And that’s OK,” Reveles said. “A lot of the technology has equalized to some degree. … But how you put it together, how you order it and configure it, that can make or break your plant.”

According to Reveles, Converge will work with a wide range of companies in the traditional scrap recycling sector and IT asset disposition space to design and plan facilities and upgrade existing operations.

Some of the equipment, including industrial controls and data destruction devices, will be made by Converge. Other equipment will be purchased from outside suppliers SRS has worked with over the years.

“When it comes to processing equipment – shredders, dust-collectors, separation equipment – we’re going to buy it from the suppliers. We know their equipment well, and we know it’s going to be the best fit long term for the client,” Reveles said, noting that Converge will also be able to customize equipment and operations based on each client’s specific needs.

He also noted the company would provide support in the form of standard operating and safety procedures and ongoing advice.

“If they need help, we’re not going to leave them hanging,” Reveles said. “For someone that really wants a well thought-out, complete solution … we can take your map and sketch and hand you your keys.”