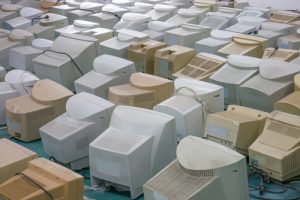 The furnace initiative was announced in 2011, and the company aimed for completion within three years. The planned investment was valued at the time at $210 million Canadian dollars (in 2011, Canadian dollars were roughly equal with U.S. dollars in exchange value).

But just one year after the initial announcement, the project was placed on hold. Last month, Teck officially spiked the plan, which was known as the No. 4 Furnace Project at the company’s site in Trail, British Columbia.

The news, first reported by the Trail Daily Times, came out when the company informed local elected officials of the decision.

“Teck Trail Operations is not proceeding with the construction of the No. 4 Furnace Project as it is not currently economically viable due to the increasingly competitive global e-waste market,” company spokesperson Catherine Adair told E-Scrap News in an email.

Teck, a metals and mining company based in Vancouver, British Columbia, in 2006 began taking in CRTs and other materials at its Trail facility. Some non-CRT materials are sent to secondary recycling facilities, but Teck processes CRTs on-site

The company’s smelting operation recycles the glass tubes into metal ingots, “which involves heating the glass with other feeds, separating the impure molten metal and electrolytic refining into pure metal,” according to a company sustainability report.

A 2011 press release noted Teck handles material for the Electronics Stewardship Association of British Columbia’s electronics recycling program. That stewardship group works on behalf of electronics manufacturers and developed a network of collection depots across the province.

In its first four years of operation, Teck handled nearly 30,000 tons of e-scrap materials at the Trail plant. The company estimated it would reach an average of about 16,500 tons processed each year, according to a 2009 sustainability report. It drew closer to that goal the following year, processing more than 14,000 tons in 2010.

In 2011, concurrent with the sustained yearly e-scrap processing growth, Teck announced the No. 4 Furnace effort.

The money was to go toward construction of a new slag fuming furnace and settling furnace. According to its 2011 sustainability report, the furnace project would allow Teck to process an additional 44,000 tons of material each year.

“The increase in processing volumes coupled with improvements to our recycling process made it the right time to move the management of the e-waste business onto the same playing field as Trail’s more traditional business operations,” said Christa Ford, Trail’s senior raw materials chemist, in the report.

Just a year after the company announced the furnace project, however, it was shelved due to global economic factors.

In its October 2012 update on the year’s third-quarter results, Teck reported lower cash flow and profits from operations compared with one year earlier, which CEO Don Lindsay attributed to uncertainty in global economic conditions resulting in lower commodity values and sales of steelmaking coal.

Although Lindsay noted the company’s overall financial position was holding strong and the company remained “well positioned to continue with our growth plans,” some capital spending was put on hold. Teck deferred roughly 1.5 billion Canadian dollars in planned capital spending for its 2012 and 2013 budgets, which included the furnace project.

Necessary construction and engineering work had not yet been completed, according to the report, and current production would not be impacted by deferring the project.

Company officials at the time told the Trail Daily Times the project was considered on hold, rather than cancelled, and that it could be restarted should the company make that decision.

Although the furnace project is off, Adair told E-Scrap News the company will “continue to recycle numerous materials effectively and economically, including CRT glass, and zinc alkaline and lead acid battery recycling.”