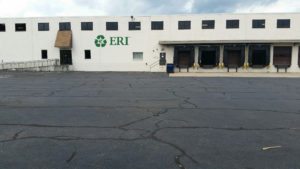 While many e-scrap companies have begun avoiding the CRT-heavy streams that define local government collections, the leader of one major processor says cities continue to be valuable partners for his firm.

ERI last week announced the opening of an e-scrap consolidation facility in Lincoln Park, N.J., replacing a smaller consolidation site the company formerly ran in the state. The company says the new operation, which is over 53,000 square feet, is four times larger than the former New Jersey building. The company also stated it has plans to eventually engage in processing there.

John Shegerian, the founder and CEO of ERI, said in an interview the decision to move ahead on the site was driven in large part by the growing volumes of material coming from local collections in the greater New York City area. Among other initiatives, ERI partners with New York City on a program that brings free e-scrap collection into apartment and condo complexes.

“We have a growing relationship with New York City and have more buildings than ever [in that program],” Shegerian said. “And in New Jersey, we have more and more business.”

He added that ERI now has around 200 contracts with local governments nationwide to handle municipal material, and he said the company views those arrangements as profit centers. “We’re going to grow that,” Shegerian said. “More and more municipalities realize they’d rather get the specialists involved. They don’t want to screw up from a liability perspective — both on environmental and data security.”

ERI’s consolidation site in Lincoln Park replaces a facility the company used to run in Saddle Brook, N.J. The company began transitioning out of Saddle Brook in October of last year and used a temporary facility in Lyndhurst, N.J.

A press release from the company notes ERI is planning for the New Jersey consolidation operation to transition to processing in the future. A spokesperson for the company said ERI is waiting on permitting before beginning processing there.

The opening and closing of processing sites — and how such moves relate to the municipal market — has been an important industry talking point of late. Some companies, such as Creative Recycling Systems, that opened multiple sites and took in municipal materials have been decimated as commodities markets have slumped and markets for CRT glass have been become increasingly challenging.

Meanwhile, other large processing companies, notably Sims Recycling Solutions, have made it clear they are aiming to steer clear of municipal collections altogether.

Shegerian said ERI is betting on the fact that increasing concerns about data security will place his company in a position to grow, regardless of what type of material makes up the incoming stream in New Jersey and elsewhere.

He said the company’s processing sites made large investments in shredding operations around 2008 and 2009 in hopes of developing more efficiency in recovering commodities. That arrangement, Shegerian said, actually positioned the company well for current conditions in which data breaches have left many cities and companies fearful of what happens to sensitive information on electronics that have reached end of life.

“People don’t want to end up on the front page of the newspaper over data-destruction issues,” he said. “Any company or government entity can spend as much as they want on cyber security, but if they don’t dispose of hardware in an appropriate way with responsible companies, it’s all wasted money. That’s where our industry is going.”

He also said that the company’s recent shifts in New Jersey were not related to that state’s ongoing debate about updating its producer-funded e-scrap law. A revamped version of the legislation was recently signed into law by Gov. Chris Christie.

“We’ve been agnostic to what the law would be,” Shegerian said. “Regardless of laws, people want to be more responsible, and they don’t want their data to be all over the place.”