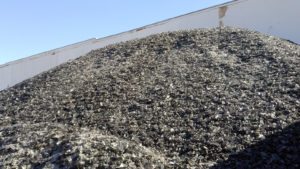 At the time of Closed Loop Refining and Recovery’s closure earlier this year, more than 50 million pounds of leaded CRT glass were stockpiled at company sites around Phoenix. State environmental officials now say they are dealing with that material, but it’s unclear who’s going to be footing the bill.

According to Caroline Oppleman, a spokesperson at the Arizona Department of Environmental Quality (ADEQ), the agency is “working with responsible parties” to begin removing material from at least three sites associated with the now-defunct CRT processor.

“ADEQ is diligently working to achieve proper and expeditious disposition of all remaining leaded CRT glass,” she said in a statement. “We are exploring all options.”

Oppleman said that Closed Loop claims it is financially unable to deal with the material. She also said the state has not paid for any disposition to date and does not have an estimated cost for the cleanup.

Of the 25,000 tons of leaded CRT glass stockpiled by the company in Arizona, roughly 2,500 tons have been removed, including 500 tons this year, according to ADEQ’s Oppleman.

Closed Loop, which has also stockpiled as much as 200 million pounds of material in Ohio, launched in 2010 as a downstream outlet for CRT glass. While the company and its founders, Brent Benham and David Cauchi, repeatedly claimed it had plans to build furnaces to process the material, no such technology emerged.

Benham, the chief financial officer at the firm, did not return a request for comment regarding the current glass situation in Arizona.

Could cost spill over to suppliers?

ADEQ’s Oppleman said the state is currently in discussions with landlords of sites leased to Closed Loop in Arizona to try to move the abandoned material downstream. She called those conversations “fruitful.”

She also said that the state has discussed the situation with California regulators. Between April 2010 and April 2016, 120 million pounds of CRT tubes collected through California’s state program were shipped to Closed Loop in Arizona, California state records show.

Jim Harrison, the owner of Harrison Properties and one of Closed Loop’s landlords in Phoenix, told E-Scrap News he hopes California regulators will ask Closed Loop’s suppliers to retrieve any warehoused material.

“The Arizona landlords are working together with ADEQ to push the California regulators to clean up these sites with the waste generators listed on the manifests,” Harrison said in an e-mail.

Harrison added he has hired a lawyer to represent the company on the issue and communicate with both Arizona and California officials.

“We are talking with various state regulatory officials in Arizona and California to address issues involving Closed Loop Refining and Recovery,” William Pearson, Harrison’s lawyer told E-Scrap News. “These talks are confidential at this moment.”

Jeff Hunts, who manages California’s electronic waste recycling program at the California Department of Resources Recycling and Recovery, said the state has been regularly updated on the status of the Closed Loop sites in Arizona but asserted that responsibility should be squarely on the company that was paid to do recycling in the first place.

“California recycling businesses paid for a service to be provided by Closed Loop Refining and Recovery, a business located in Arizona and regulated by ADEQ,” Hunts said. “While laws exist to address contingencies, there are responsible parties currently in possession of the CRT glass at Closed Loop, and those parties should fulfill their responsibilities.”