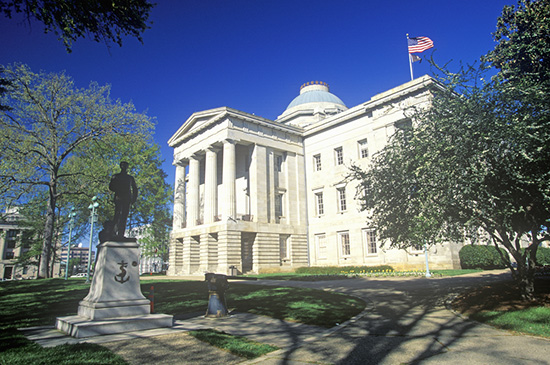 A bill winding its way through the North Carolina legislature would eliminate the state’s six-year-old e-scrap recycling system and prohibition on landfilling electronics.

House Bill 169 would relieve electronics manufacturers of extended producer responsibility obligations in the state of 10 million people. It would also lift a ban on landfilling or incinerating TVs and computer equipment.

The provisions are included in a wide-ranging piece of legislation aimed at reducing state government regulations. Republicans in the Tar Heel State typically submit such a bill each legislative session.

According to the Associated Press, bill supporters point to the downturn in markets and a lack of recycling companies to accept material in the state. They say the result has been an uptick in illegal dumping. Bill opponents say it undermines an important framework that helps protect the environment and support the recycling industry.

Local governments, which receive e-scrap grants through the program, have previously expressed concern about the financial impacts they’d experience from elimination of the program.

During the 2013-14 fiscal year, more than 19,000 tons of e-scrap were collected through the state program, with local government sites and events accounting for 77 percent of collections, according to the North Carolina Department of Environmental Quality (DEQ).

Under North Carolina’s extended producer responsibility law for electronics, electronics producers must submit plans to state government on how they plan to collect and recycle TVs and other display devices. TV brand owners are given collection and recycling targets.

The state also charges brand owners fees, which are then distributed by population to local governments to help them pay for their electronics recycling programs. In 2015, the state government gave out $700,000 in grants to cities and counties, according to the North Carolina DEQ. Local governments receiving those grants are required by state law to send the e-scrap they collect to recycling companies certified to the R2 or e-Stewards standard.

The program has been in effect since 2010. The state’s electronics landfill ban went into effect July 1, 2011.

Lawmakers considered scrapping the state’s electronics recycling program last year as well. House Bill 765 would have eliminated the state’s e-scrap law but was revised to remove that provision before passing out of the legislature.

However, in March 2015, the legislature successfully passed a law removing keyboards and mice from the list of covered equipment.

The North Carolina House of Representatives passed a version of the current bill, HB 169, in July 2015, and the Senate has been considering it since then.

On May 26, the Senate’s Commerce Committee approved a substitute version that retains the provision eliminating the state’s e-scrap program. The new version of the bill is still awaiting full approval in the Senate, and it would then need to be approved by the House before it could be sent to the governor.