In My Opinion: Time out of mined

This story originally appeared in the March 2016 issue of E-Scrap News. 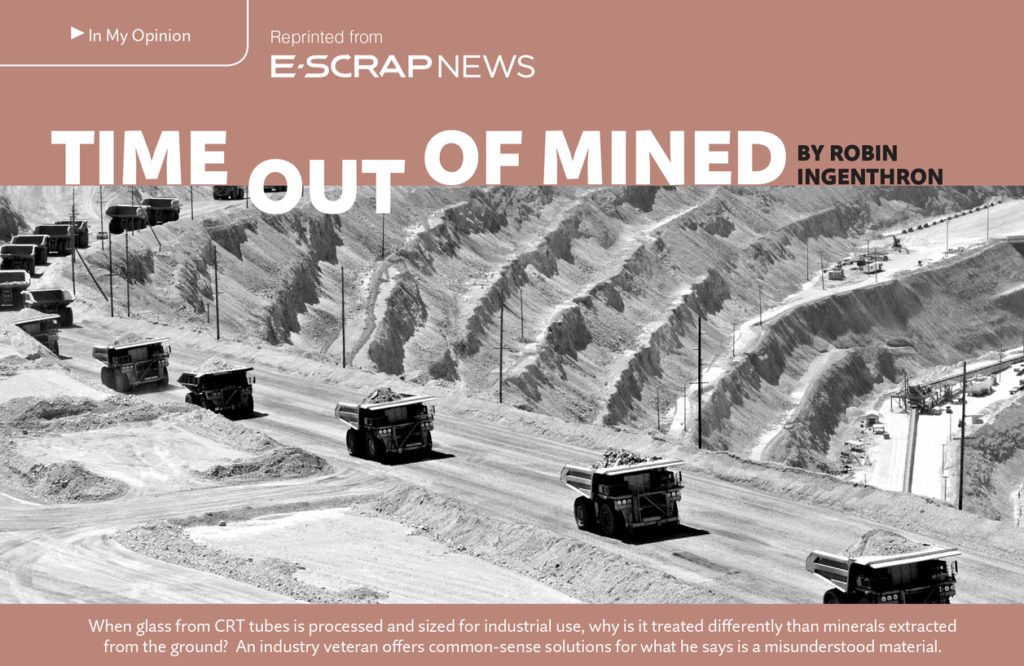 In a democratic capitalist society, environmental laws are most likely to be enforced where the real estate is the most valuable. A clean acre in the city is worth more than an acre far away from people, and it makes sense to keep smokestacks far away from schools and children.

Over the decades, however, this land-value dynamic has produced some unintended consequences. Social injustice is one outcome, when regulators prioritize the value of land in wealthy suburbs over land in inner cities or rural areas. The concept of “not in my backyard,” or NIMBY, ends up protecting the backyards of the rich.

Falling prey to the NIMBY concept, investors have moved the world’s most toxic activity – hard rock mining – to remote areas far from populations and rich neighbors. This ultimately shifts priorities in a way that simply externalizes the pollution.

For example, unlike primary smelters that use virgin ore on federal lands in the desert, secondary non-ferrous metal smelters were for years built in cities – near the scrap. While recycling copper is the most sustainable way to make new copper, regulatory enforcement and civil law pressure fell hardest on secondary copper smelting. And by 2000, the last secondary copper smelter in the U.S., Chemetco in Chicago, was closed under an U.S. EPA enforcement action.

In recent decades, virgin material refining was deemed a safer investment, since the mines and smelters are located in less-populated areas. This leads to lower prices garnered for recyclables and more exporting to secondary smelters in nations with cheaper land and fewer environmental laws. On a per-capita basis, we generate more carbon, destroy more of the environment, release more toxic materials and throw away more resources, even as we enforce our environmental laws more fervently. We care about the environment, but we seem to care about our real estate even more.

Sometimes, of course, the trade-off protects children, and we consciously allow primary smelters to belch more smoke because they are farther away. But there are also laws on the books that have unintended consequences on recycling processes that cause virtually no pollution, and whose net contribution to the environment is positive. In these cases, recyclers and primary smelters find themselves separated by flukes of environmental law.

A mineral by any other name 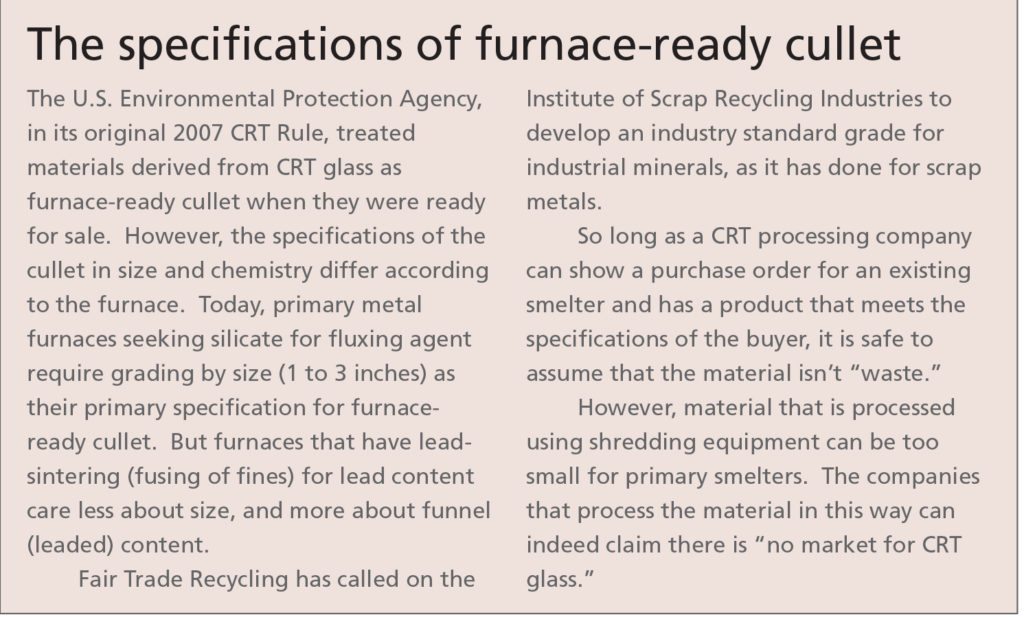 Let’s start by thinking about a recycled gold ingot, or a recycled steel bar, or recycled cullet, or a bar of lead. These materials and their virgin material counterparts are traded equally in the marketplace. The regulator is neutral to the final material: A steel bar is a steel bar.

Now let’s look at materials defined by the North American Industry Classification System as industrial minerals, notably within NAICS 327992 industries. Thousands of quartz and silicate mines extract barite, galena, fluorspar, anglesite and other “industrial minerals” across the globe. And much of this material is used by smelters as fluxing agent – the term used for minerals harnessed to control heat and flows in extremely high-temperature smelters. In the industry, a ton of fluxing agent is simply a ton of fluxing agent. Each smelter has a recipe of lead and silica, which they pay to be properly sized and blended. When properly processed and sized, CRT glass becomes “furnace-ready cullet,” and can be used or blended with other lead and silicates as fluxing agent. It behaves in the same way as the aforementioned minerals.

But when it comes to CRT glass, many in our industry want to apply rules against “speculative accumulation,” a Resource Conservation and Recovery Act (RCRA) term for hoarding wastes with no plan to actually recycle them. If applied to a finished furnace-ready product, this would handicap recycling.

Speculative accumulation rules protect commercial real estate owners and their neighbors. Those rules are normally applied to recyclables that have yet to be processed. Tire piles declared to be intended for pyrolysis, crumb rubber or retreading have a way of catching on fire when the cost of the refining exceeds the value of the end material. Sham recyclers too often gather whole tires – or whole CRT tubes – and pocket the recycling fees without hiring labor to do the processing work. But applying tire pile rules to the finished crumb rubber makes no sense when the same rule isn’t applied to virgin rubber.

If speculative accumulation rules are invoked against the finished commodity itself – recycled pulp, copper ingots, crumb rubber or furnace-ready cullet, for example – that is bad law. Putting a legal “expiration date” on a raw material solely because it was sourced from urban ore sends the wrong message to investors and consumers.

This is not to say we should abandon oversight. If I am doing a downstream audit of my CRT recycler, I want to see that the operation has piles of graded, sized, industrial minerals. I want to see those piles. They should look just like a pile of anglesite or galena or any other NAICS 327992 commodity at a mine in Montana.

We don’t want to see Gaylords of raw CRTs stacked five-high in a receiving area, growing disproportionately to the graded material. We don’t want to see TVs with the copper whacked off, sitting as intact units, with no indication of ability or will to process it into a fluxing agent.

The product we want to see no more resembles a “CRT” than lead ingot resembles an auto battery. It may contain barium, like barite. It may contain lead, like anglesite. It should be graded and sized, separated and clean. In that form, the lead is vitrified, chemically bound in the silica and no more hazardous than leaded-glass crystalware. Like its mined counterparts, it should be in a berm and monitored for effluent. But there is no reason to mandate the industrial mineral be consumed – or disposed of – during a calendar year.

If CRT cullet is processed and treated like other industrial minerals, there is an almost endless market for it. A single copper smelter could use all the CRT glass in the country gradually, blended it as a fluxing agent, over three decades, just as it uses mined quartz.

No difference in safety or toxicity

Industrial minerals in NAICS 327992 industries are inventoried and traded as commodities. Those industries are not in the business of running waste treatment plants, and they don’t want to be. The leaded quartz or feldspar typically used as a fluxing agent is dug from the side of a mountain far away from a city. It’s beneficiated, sized and graded, and loaded onto railway cars. Whether the final furnace-ready product is made of recycled material or virgin ore makes no difference in safety, toxicity or engineering properties. From a carbon life-cycle or habitat perspective, in fact, it’s better for smelters to use recycled minerals than to mine new ones.

Unfortunately, many recycling advocates are calling on EPA to enforce speculative accumulation against the finished product, the furnace-ready cullet. They want 75 percent of the material to be sold and moved in 365 days. But, remember, virgin material doesn’t move that way. Entire mines are sometimes mothballed for years, due to economic demand or labor or capacity. If a very lead-rich pile of galena is available, the smelters won’t need leaded cullet, and will instead use unleaded fluorspar to dilute the galena. If galena is more expensive, the smelter will use a different recipe with more leaded quartz, or “remanded smelter waste.”

Furthermore, the engineers who buy and use industrial minerals don’t want a feedstock with an EPA “expiration date.” If they have six choices of lead salt as a raw material, and only one falls under RCRA’s “speculative accumulation” rules, that’s not the one they will buy.

Just think of a buyer who could purchase the rights to 100,000 tons of pile A and use it as they see fit over the life of the smelter or buy the rights to pile B and be forced to use 75 percent of it in 365 days. We know what the reaction will be: No thanks, pile B.

A precedent for action

EPA has resolved this issue before. The agency worked closely with industry in exempting remanded smelter waste – the recycling of slag from copper and lead furnaces – from “speculative accumulation” rules after an assessment of NAICS 327992 industries three decades ago. EPA accepted that quartz and flux inventory really was being used the same as the slag, and the slag piles were eventually being recycled. It took more than a year, but it was happening over a time frame that was reasonable among mined industrial minerals. And EPA realized that forcing the industry to landfill the slag would just lead to more industrial mineral mining. Common sense prevailed.

This interpretation doesn’t even require new law. During EPA’s assessment, there was a mongrel mineral in piles in Montana that didn’t get noted in the report. CRT glass, from factory fallout at a television manufacturing plant in San Diego, was already being managed there. Up to seven trailerloads per week of the CRT glass was delivered to NAICS 327992 industries, without a different “expiration date” than primary material. It was likely consumed in the same blending process as the industrial minerals and remanded smelter waste that EPA saw fit to exempt from expiration dates. And unlike remanded smelter “waste,” the CRT cullet was not a “byproduct” – it was traded just like the finished product being dug out of mines.

EPA needs to work with industry to establish grades and specifications for furnace-ready cullet. This would benefit recycling markets, and it would benefit the environment too.

Robin Ingenthron is CEO of Good Point Recycling and founder of the Fair Trade Recycling group, formerly known as WR3A. He can be reached at [email protected]

Want more of the opinion and analysis delivered by E-Scrap News? Start a print subscription today.