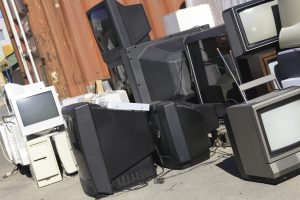 The webinar, hosted by the Northeast Recycling Council’s State Electronics Challenge and meant to serve as an update on the CRT recycling landscape, drew more than 450 listeners and featured presentations from Eric Harris, the associate counsel for the Institute of Scrap Recycling Industries (ISRI); Jim Levine, the president of Regency Technologies; and Jason Linnell, the executive director of the National Center for Electronics Recycling (NCER).

Speakers did not mince their words when it came to the question of whether sufficient domestic and international capacity exists to handle U.S. CRT glass and whether manufacturers are doing enough to support the industry.

“There simply is a negative cost to do it right,” Harris said. “The bottom line is there are ample markets that exist domestically and internationally. It’s our assessment that there is unlimited capacity.”

That assessment was supported by the comments of Levine, whose company currently has six operations in the U.S. Regency, he told listeners, has been able to maintain a close relationship with one of the industry’s largest CRT glass processors, Dlubak Glass.

“Markets do exist. It’s all about costs, not about capacity, and it’s not free,” Levine said. “We just need to re-train ourselves that certain materials are just going to come with a cost and we’re going to have to deal with it if we want this stuff to move in the right direction.”

The comments by Harris and Levine came in the wake of the largest international consumer of U.S. CRT glass closing down. As E-Scrap News first reported in October, India’s Videocon announced it would no longer be accepting material as it works to restore its glass-to-glass operation.

In response, companies that have worked with Videocon for years have been forced to explore alternative markets and some have worried their options may be limited, especially within the U.S..

Linnell with NCER agreed that CRT markets exist, but he said they are not as abundant as in years past.

“The markets for CRT glass management are changing,” Linnell said. “There are certain options that are going away completely.”

Speakers pointed out that stockpiling and outright abandoning of CRT material is ongoing. Harris said the issue is “a growing concern” for ISRI, and Linnell estimated at least 10 to 15 abandonments have occurred in recent years and that more may be on the way.

“We do need to keep an eye out for and prepare for further abandonment cases that may come up as well as the costs that are not going down for CRT management,” Linnell said.

The fact that manufacturers are expected to foot the bill for CRT management in many areas complicates the situation, panelists argued.

According to Harris, original equipment manufacturers tasked with recycling the e-scrap stream in 25 states are choosing to work with companies that are “dramatically underestimating the cost of responsibly recycling the CRT glass.”

“We have growing concerns that we’ve allowed one industry to basically regulate another industry without proper enforcement at the state level,” Harris said.

“There are challenges with working with manufacturers or groups of manufacturers, which sometimes provide a limit on what they’re willing to pay for,” Linnell said.