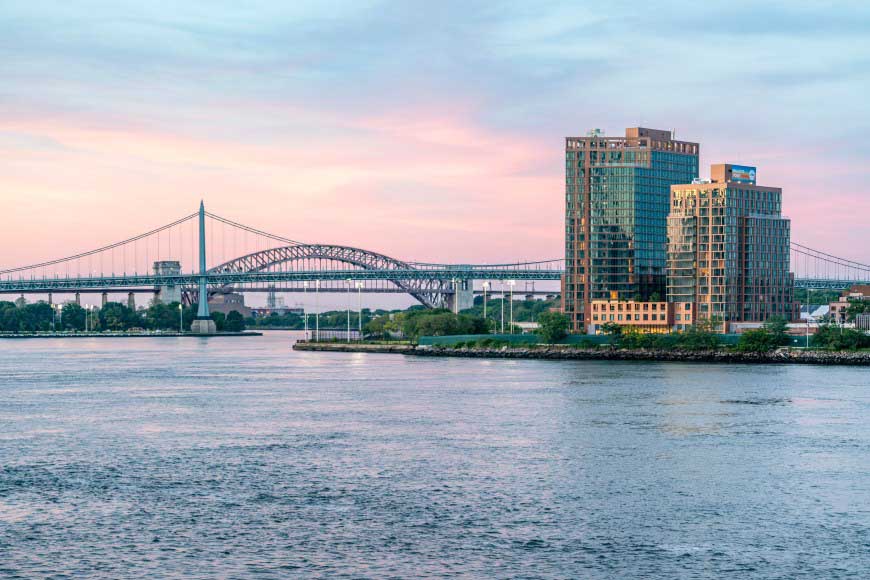 The Hallett’s Point development in Queens, N.Y. is home to the first high-rise ever built with concrete containing ground glass pozzolan. | Courtesy of Urban Mining Industries

Making new glass bottles is generally considered the highest and best use for cullet, but recycling glass into a cement substitute is actually better from a greenhouse gas perspective, speakers on a recent webinar said.

The Northeast Recycling Council and Northeast Waste Management Officials’ Association recently hosted a webinar covering the recycling of MRF glass into pozzolans, which are a partial replacement for cement used in concrete.

“It’s basically five times more impactful from a climate perspective to put glass into concrete, rather than going back to bottles and fiberglass,” Grasso, who is co-managing partner of Urban Mining Industries, said during the Dec. 14 webinar. “There are benefits to doing the others, but this is far more impactful.”

The pozzolan replaces up to 50% of cement that is used in concrete. Its carbon footprint is about 5% of the cement it replaces, he noted.

Urban Mining sources glass from single-stream, dual-stream and source-separation collection methods (but not clean material returned through deposit programs) from multiple Northeast states. It either charges or pays for the material, depending on its contamination levels, he said.

To clean up the stream, Urban Mining uses technologies such as magnets, air and density separation, but no water, he said. Owing to their small size, the metal, plastic and fiber residuals are destined for disposal, not recycling.

Other scrap or waste materials have traditionally been used as pozzolans to bring down the carbon footprint of high-performance concrete. Those include fly ash, which is a residual of coal combustion in coal-fired power plants, and slag, which is a byproduct of steel production. But Grasso noted that as coal burning is reduced because of its GHG emissions, and as steel plants upgrade to what are called electric arc furnaces, supplies of both byproducts are diminishing.

O&G Industries, a vertically integrated concrete, asphalt and construction company in Connecticut, has, as a standard practice in the past, used fly ash or slag to replace 15% of cement in high-performance concrete, T.J. Oneglia, the company’s vice president of construction materials, said during the webinar.

But fly ash has disappeared from the Northeast market, and at times O&G has been put on allocations and couldn’t get as much slag as it wanted, Oneglia said.

So, for the past two years, O&G, a strategic partner of Urban Mining, has been regularly using Urban Mining’s Pozzotive, which is made at a plant in Beacon Falls, Conn. When Possotive was used to replace 50% of cement in a concrete mix rated at 9,000 pounds per square inch, the carbon footprint was reduced by 42%, he said. 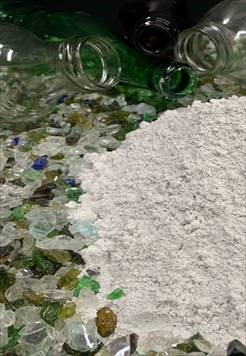 Grasso noted that concrete made up 10-15% of concrete by weight but accounts for nearly 80% of the carbon emissions, far outpacing other ingredients such as sand/stone and water. Aside from having a lower carbon footprint than cement, ground glass pozzolan’s carbon benefits lie largely in the fact that it can be made with a light energy separation and milling process, and it doesn’t require the energy to melt for use in bottles or fiberglass, he said.

According to his presentation, if all roughly 12 million tons of post-consumer glass were recycled into bottles in the U.S., the GHG savings would equal about 2 million tons. Putting all that glass into pozzolan would generate a savings of over 11 million tons.

Grasso pointed out that plate glass and other sources can also be used as pozzolan. Kim Bawden, a senior staff engineer at the New York State Pollution Prevention Institute, which is housed at the Rochester Institute of Technology, presented during the webinar on research exploring the use of glass from old TVs in pozzolan.

The heart of old, bulky TVs, CRTs are made of funnel glass, which contains lead, and panel glass, which is thick and heavy but doesn’t contain the heavy metal. ERI separated the panel glass at its Indiana recycling facility for testing as a partial source of glass for Pozzotive.

Bawden said the project showed CRT panel glass could be mixed with MRF bottle glass and used in Pozzotive, but its chemical composition didn’t allow for a 100% replacement.

Additionally, a life cycle assessment showed that both sources of glass have GHG benefits over cement. But the MRF glass, which was generated in the Northeast, had a lower environmental impact than the CRT glass, which was processed in Indiana, where the power grid uses carbon-heavier power sources, and had to be shipped all the way to the Northeast for the testing, Bawden said.

Benefits to both industries

The speakers noted other benefits – both to the recycling and construction industries – of recycling glass into concrete.

Grasso noted that bottle makers need cullet sorted by color, and they can’t accept ceramics and porcelain contamination because they melt at different temperatures than bottle glass. But color and ceramic/porcelain content doesn’t matter with pozzolan.

Size is also a concern with bottle and fiberglass insulation markets. Urban Mining is attempting to capture all of the glass, and it is upgrading its facility to capture fines it’s currently losing in its process, Grasso said.

“We’re not bound by size or color separation, so we don’t have to stop at a certain size because it doesn’t pass through an optical sorter to get separated,” he said.

Grasso acknowledged criticism that recycling glass into pozzolan is a “one and done” recycling exercise, as opposed to making bottles again and again. And he said critics accuse the practice of being a game of musical chairs, simply displacing use of lower-carbon solutions such as fly ash and slag.

Addressing the first critique, he said data shows a substantial number of bottle production cycles are needed to equal the GHG reduction benefits of one cycle of processing glass into pozzolan. And, for the second, he cited shortages of alternatives, including fly ash, so Pozzotive is a supplement to help fill the void when fly ash isn’t available, he said.

Oneglia of O&G Industries said testing has shown ground glass pozzolan improves the ability of concrete to withstand freeze-thaw cycles, and it reduces shrinkage that can cause cracking.

Additionally, it improves the concrete’s ability to resist the damaging impacts of salt and de-icers, which has state departments of transportation excited. It increases the density of the concrete, reducing the amount of chloride that penetrates down to the reinforcing steel. That salt corrodes steel, accelerating the deterioration of the concrete.

Even before the Pozzotive production plant opened in Beacon Falls, Conn. two years ago, O&G Industries was testing the use of ground glass pozzolan in its concrete, Oneglia said. According to an Urban Mining press release, the plant has a production capacity of 50,000 tons a year.

As of 2020, there is an ASTM specification for using ground glass pozzolan in concrete, paving the way for its widespread use.