Q&A: Visions of a reuse future

Over the past two years, extended producer responsibility for packaging has come into the industry spotlight in the U.S., with bills passing in four states and discussions reaching high levels in several others.

One would assume the nonprofit group Upstream would have been front and center in those conversations to mandate producer funding for material management. But even though Upstream, which is set to celebrate its 20th year in 2023, was founded with a focus on EPR, it has recently shifted priorities.

“We realized three years ago that recycling is important and we want people to keep recycling, but it’s certainly not going to solve a lot of these bigger issues like climate pollution associated with consumption,” Matt Prindiville, Upstream’s CEO, said in an October phone interview with Resource Recycling. “We felt there really needed to be an organization focused on packaging reduction and reuse systems for consumable goods.”

In this Q&A, which has been edited for clarity and brevity, Prindiville outlines more about how and why the group evolved to promote packaging reuse. He also offers thoughts on what reuse/refill systems could look like at scale, as well as how MRFs and communities can get involved.

Resource Recycling: In 2015, we had you on stage at the Resource Recycling Conference advocating for packaging EPR. But today, with EPR actually becoming law, Upstream has been most visible through things like your Reusies awards programs and other reuse initiatives. How did this transformation take place? 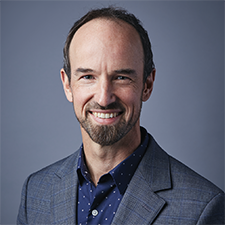 Matt Prindiville: The organization was founded to bring the idea of EPR from Europe to the U.S. The founders of Upstream helped create the zero waste movement in the U.S. and Canada, and they felt that movement had become overly focused on the end of the pipe. They said, “We’re never going to be able to recycle ourselves to a sustainable future. We have to think upstream to redesign the system.” The organizing principle was to start with local government officials to get them to understand the opportunities with extender producer responsibility and product stewardship and then to form these state-based product stewardship councils.

Ten years ago, Nestle Waters North America came out in support of EPR for packaging, getting a lot of pressure from shareholders. As we started to work more closely with Nestle Waters, we saw they were serious, and we developed model legislation with them and entered it into a bunch of states. And to make a long story short, we failed. A lot of the legislators would say, “I have a blue bin, I have a blue cart – why do I care who pays for my recyclables?” And that was still a time when China was accepting most of our low-value recyclables. Cities could still make money off their recycling programs. Plastic pollution was not really in the zeitgeist yet. And I think consumer brands didn’t feel like they had to do anything.

And it was at that point you reassessed the group’s focus?

We went back to the drawing board and I think we recognized we were missing the poster child for why we needed EPR. We thought at the time that plastic pollution was going to really drive awareness around packaging waste and that was potentially going to provide the opportunity to pass more policy. We convened a number of organizations that had plastic pollution projects and brought about 40 of us together in Berkeley, Calif. in 2015. Three years later, we had helped to create the Break Free from Plastics movement. Now there are more than 2,500 organizations worldwide that are collaborating together to solve plastic pollution. And the big shift that happened is that plastic pollution is a huge issue now. To put that burden on companies to solve the problem was a really effective strategy, and that’s been one of the things that has helped shift their attention to say, “OK, we need to support EPR now.”

The other thing is that China and other parts of the world have shut their doors to low-value recyclables, and that has changed the economics of recycling. Plus, these big consumer packaged goods companies have ESG goals. They have crunched the numbers and realized that recycling and materials substitution alone is not going to get them where they need to be to meet these targets.

So you think that wider corporate sustainability and measurement push can help spur more reuse in the packaging space?

Yes. We started focusing on the policies that need to be created to enable this reuse economy. How do we help businesses figure out how to change value chains? How do we move to thinking about packaging as a service and not a product? We have a whole part of our work that’s focused on showing that this reusable future is possible, that there are people doing it and creating it now. That’s where the media work and podcasting and Reusies come in. We think there are great models here that other companies can use. That evolution for us really took place four years ago, in September 2018. We had a planning retreat where we decided we were going to go all-in on source reduction and reuse.

What is the biggest barrier to overcome to move reuse toward scale?

Once that collection infrastructure is in place, a lot of it is just logistics and processing. We can envision MRFs so they can accept reusables and move them off the line. And then the washing companies, or it could be a company like Coca-Cola or a brewery that has its own washing infrastructure set up for their one type of product. We think it would actually be a mix of both.

Almost 20% of Coke’s products globally are in refill today. We know how to do this. There are reuse service companies across the world. For us, it’s more of a question of: What is it going to take to get collaboration to build that infrastructure? And we see EPR as potentially being a big help to build out that reuse infrastructure.

In the EPR bills that have passed, it doesn’t seem like reuse was too heavily featured. What’s your take?

The short story is all stakeholders know what recycling looks like under EPR. They’ve evaluated it for the benefits and the costs. It’s been a huge sea change in position. But the problem is they don’t know what it looks like for reuse. We’re having those conversations, and it’s my hope that in the next iteration of EPR bills that get introduced in state legislatures next year, we’ll start to see stronger reuse provisions and components. But also remember that the bills that have passed have not been implemented yet. There is still the possibility to use the funds raised to build out that reuse infrastructure.

We really also feel that as EPR moves forward that deposit return systems need to move forward with them. Deposits are a fundamental part of getting beverage refill in place, and also they could accommodate other types of reusable packaging. Loop, the reusable packaging program from TerraCycle, does not necessarily need to have its own return-to-store system. If you had the right deposit system set up, they could take those loop containers. Once you’ve set up a way for the consumer to get that container back efficiently and easily, you’ve done the hard part. Why would we not use the infrastructure for returnables?

It’s taken a lot to finally get some of these brands and trade groups to the table to fund recycling. If environmental groups start demanding reuse mandates, will that kill the stakeholder collaboration?

We shouldn’t think of EPR as just optimizing recycling. It’s really a tool for optimizing the circular economy for packaging. If we’re thinking about this as an environmental policy, what matters is that the systems we create reduce the amount of extraction of natural resources on the front end, they reduce the energy throughput in our supply chains, and they reduce the waste and pollution on the back end. And reuse is just so much more impactful in terms of hitting those environmental goals than just recycling.

We recognize we’re asking a lot of these brands to take the next bigger step, and that will take time. We’re pushing for the strongest provisions possible and we recognize it is going to be a give and take with the brands that will be funding it.

You mentioned that MRFs could have a spot in the packaging reuse ecosystem. What does that look like?

MRF operators should start preparing for refillable packaging. That’s probably going to be a combination of glass, PP plastic, PET, steel and possibly some reusable aluminum. MRFs in major metropolitan areas where you have a lot of reuse service providers operating already – the MRFs there should be paying attention. They are going to be asked to handle those materials relatively soon and get paid for it. They should also think of themselves as possibly getting into the logistics. If you’ve got extra space where your MRF is, you might consider building a washing warehouse right next to the facility.

How does the MRF get paid exactly?

The payment is coming from the entity using the reusable packaging. It could be an intermediary, a reuse services company stewarding packaging on behalf of their clients, such as a restaurant or a venue. You also might have a situation where Coke owns the product. They would say, “I want you to sort my refillable bottles off the line, send them back to me, and I’ll pay you X amount per bottle.” There will be unit economics involved with that. And that’s the same with washing – that will be a service. I can’t tell you if it will be 3 cents for this container and 5 cents for that. A lot of that will be figured out through building these systems.

What recommendations do you have for local governments looking to become more involved in the push for wider reuse?

Reuse Seattle is a great example. You had people within the sustainability department for the city who wanted to bring reuse to Seattle, and they started calling people to help them figure out what that would look like. They designed an RFP to get reuse service companies to come to the table, and they offered some of the seed funding to get the idea off the ground. They got a couple of anchor institutions, a couple music venues, to say, “Yes, we’re going to do reusable cups,” and that built the justification to build out a wash operation. That also now allows for other service providers to come in and use that washing facility. Someone can come in and say, “I’m going to do reusable takeout containers.” So you have public-private partnerships, with government officials, community groups, NGOs and corporations. I think a lot of the time government officials feel like they have to follow what’s going on in the private sector as opposed to really driving change. This is a situation where officials drove change for the city of Seattle. It’s a great model for the rest of the country.