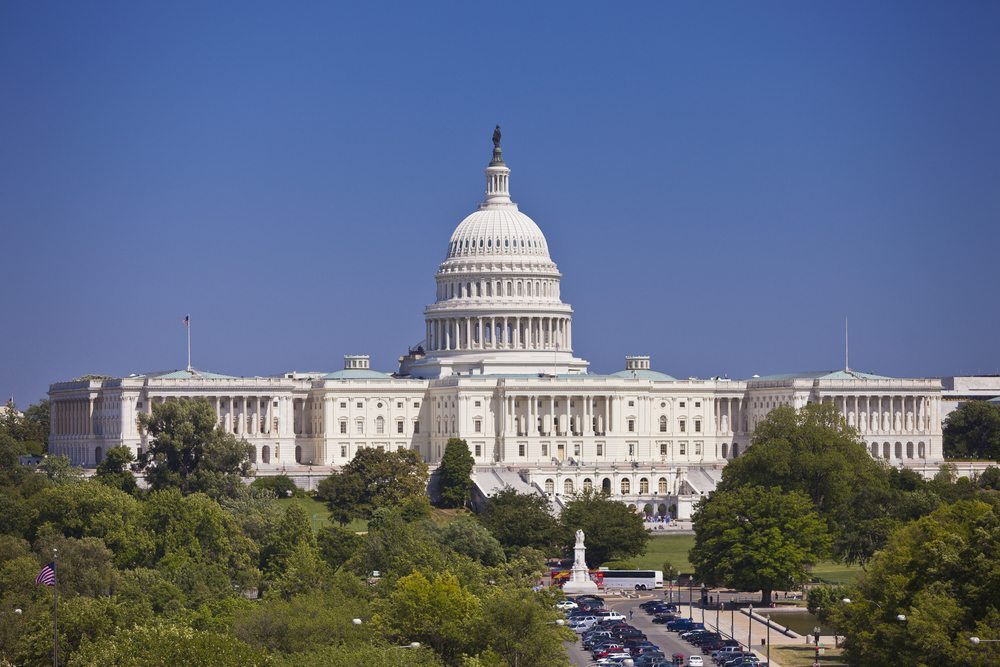 The new act is built on the Break Free From Plastic Pollution Act, which was introduced in the last two Congressional sessions but failed to move forward. | Rob Crandall/Shutterstock

A newly introduced bill in Congress is reviving parts of the Break Free From Plastic Pollution Act, with a focus on environmental justice.

Introduced Dec. 1 by Democratic Sens. Cory Booker and Jeff Merkley and Democratic Reps. Jared Huffman and Alan Lowenthal, the “Protecting Communities from Plastics Act” (PCPA) is meant to address “the plastic production crisis that is fueling climate change and perpetuating environmental injustice,” according to a press release from Sen. Merkley’s office.

It would do so by setting stricter rules for petrochemical plants, including pausing permitting of new and expanded plastics facilities until the U.S. EPA could make regulatory updates.

The law would also shift the U.S. economy away from certain single-use plastics, create new national targets for plastic source reduction and reuse in the packaging and food service sectors and set up federal incentives to spur the expansion of reusable and refillable systems.

“Petrochemical, plastic production and waste incineration facilities, which are disproportionately located in or near Black, Brown and low-wealth communities, release harmful air and water pollution that cause increased incidences of asthma, cancers, endocrine disruption, development disorders and heart disease,” the press release stated. “Transitioning off of fossil fuels only to replace that demand with more fossil-based plastic production is not a sustainable solution, and will continue to perpetuate existing climate and environmental justice impacts.”

The new act is built on the Break Free From Plastic Pollution Act, which was introduced in the last two Congressional sessions but failed to move forward.

Merkley noted that as plastic particles have been found “up on the snowcaps of the arctic and inside our own blood streams, it’s clear we need strong legislation to get this plastics crisis under control.”

Huffman said he plans to keep working on the issue in the next congressional session but introduced the bill to send “a message here and now to put oil and gas companies on notice.”

“My bill will protect the health of our communities, reduce greenhouse gas emissions fueling the climate crisis and stop the fossil fuel industry’s petro-dictatorship as it eyes plastics as a safety net,” he said.

Democrats control both chambers of Congress until January, when Republicans will take control of the House of Representatives.

Matt Seaholm, president and CEO of the Plastics Industry Association, said in a statement that he’s “disappointed but not surprised by the continued hyperbole contained in this legislation which only causes divisiveness in the efforts to come to real solutions to the environmental challenges we face.”

“We are happy to work with any member of Congress to achieve solutions, but a press release and legislation like this takes us in the wrong direction, will destroy an American industry, the communities they claim to care about and send manufacturing jobs overseas,” Seaholm said. “In their rush to demagogue, the authors of this bill fail to recognize that plastic is essential to society.”

Joshua Baca, vice president of plastics at the American Chemistry Council (ACC), added in a separate statement that plastic products are “essential to a lower carbon and more sustainable future.”

He said the PCPA would “stall the acceleration of a circular economy for plastics currently underway” and cause the loss of American jobs and billions of dollars of investments.

Calling the PCPA “an assault on U.S. manufacturing that threatens every American’s way of life,” Baca suggested that Congress instead introduce legislation in line with ACC’s 5 Actions for Sustainable Change, which include requiring all U.S. plastic packaging to include at least 30% recycled plastic by 2030, developing national recycling standards, establishing producer responsibility systems and studying the greenhouse gas emissions of all materials.

As of Dec. 1, there are 34 organizations that have endorsed the bill, including the Alliance of Mission-Based Recyclers, Break Free From Plastic, the Center for Biological Diversity, the Center for International Environmental Law, Ocean Conservancy, the Plastic Pollution Coalition and the Surfrider Foundation.

In the press release, Melissa Aguayo, the U.S. regional coordinator of Break Free From Plastic, said it’s time “to hold the petrochemical industry accountable for the harm and injustice they create by poisoning our air, water and soil, as well as by fueling the climate crisis.”

“For too long, Black, Brown, Indigenous and low-income communities have suffered the worst impacts of the plastic pollution crisis – from the extraction of fossil fuels to plastic production and incineration,” Aguayo added.

Anja Brandon, associate director of U.S. plastics policy at the Ocean Conservancy, said a vital part of the legislation is that it prevents the EPA from including chemical recycling technologies in the national recycling strategy and “ensures that the U.S. does not continue to rely on harmful systems that perpetuate single-use in the form of chemical recycling or incineration.”

“Chemical recycling” generally refers to a wide array of processes that use heat, pressure and solvents to break down the molecular chains of polymers into liquids or gasses that can then be processed into fuels, oils, waxes, new plastics or other chemical products.

The 81-page bill covers any industrial facility that transforms petrochemical gas and liquids into ethylene and propylene for later conversion into plastics, polymerization or polymer production facilities, and any industrial facility that depolymerizes or otherwise breaks down polymers into chemical feedstocks for use in new products or as fuels.

To better understand both the current landscape and how to proceed, the bill outlines a number of research initiatives, all to be carried out under the auspices of the U.S. EPA.

Among those would be a survey, in partnership with the National Academy of Sciences and the National Institutes of Health, of existing and planned expansions of facilities across the entire supply chain, as well as the existing standard technologies and practices regarding emissions.

This research would also cover the toxicity of polymers, additives and chemicals and their impacts on public health, as well as the recyclability of plastic and the ability to use recycled content.

A study on the effects of microplastics on the human body is also outlined in the draft bill.

The legislation would make modifications to the Code of Federal Regulations regarding emissions, equipment and monitoring, and would tighten up permitting to ensure that any permits issued under the Clean Air Act or the Federal Water Pollution Control Act first undergo an environmental justice assessment to assess direct, indirect and cumulative economic, environmental and public health impacts.

Affected communities would also get more input during the permitting process under the draft bill, and facilities would need to prove they have sufficient financial resources to safely close the covered facility at the end of its operational life and to provide an appropriate emergency response in the case of an accidental release.

Several programs are created in the bill, including grants for scalable reuse and refill programs and a microplastics pilot program to test the “efficacy and cost effectiveness of tools, technologies and techniques” to remove microplastics from the environment without causing additional harm and to prevent the release of microplastics.