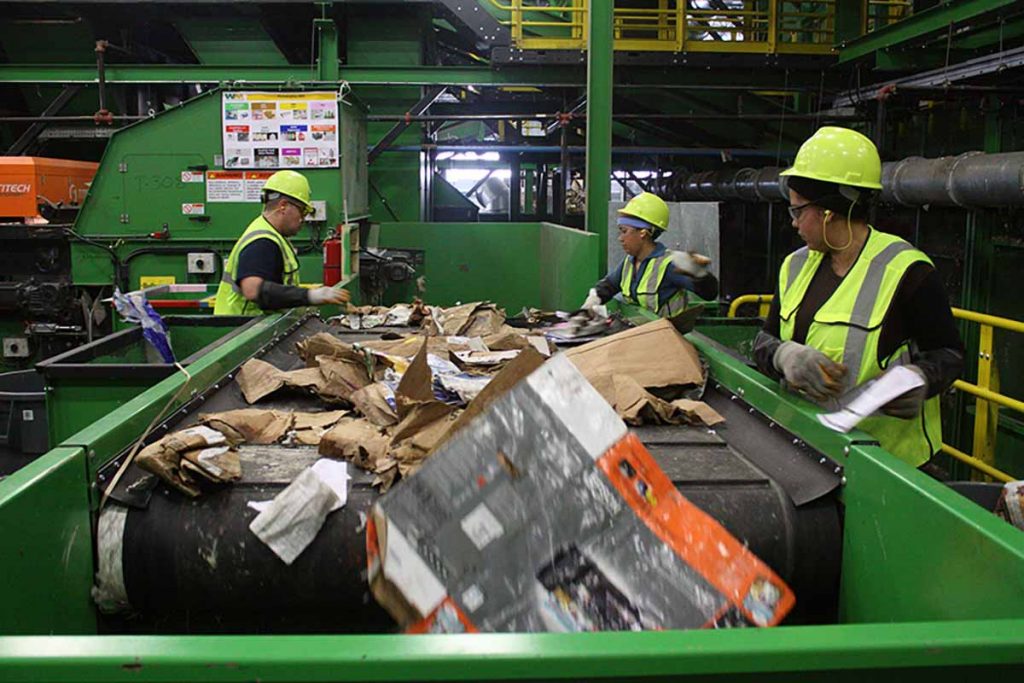 MRFs are using what they see as a more equitable pricing structure with municipal customers. Courtesy of WM.

Commodity prices crashed recently after a year of highs, but industry leaders said changes instituted after the 2008 recession make them better prepared to handle current volatility.

Dale Gubbels, CEO of Nebraska-based Firstar Fiber, said the recent pricing crash has him “thinking back to 2008, when it seemed like recycling is the canary in the mine that is this a sign of a recession.”

“I sure hope it isn’t, but it does make you wonder,” he said. “We nevertheless feel we are in better shape than we were in ’08, ’09, largely because that was a wake-up call for the industry.”

Now, more MRFs are using a more equitable pricing structure with municipal customers, using weighted average commodity values and a more balanced share of the rewards and risk, “which is always going to be with us in this industry,” Gubbels said.

Given that paper and OCC can make up half or more of all tons tipped at a MRF, prices for those grades are particularly meaningful – and those grades have seen the steepest drops in recent months.

OCC hit a peak U.S. average of about $170 per ton just over a year ago, and while the price came down after that, it held relatively steady through the spring. Then, starting this summer, it tanked, from $131 in July to $40 earlier this month. Mixed paper followed a similar downward trend, falling from $69 per ton in July to negative $1 this month.

Prices for plastics and aluminum have also been sliding.

Waste Management’s recycling revenues have taken a bruising because of lower commodity values, but the Houston-based company’s recycling business remains profitable, executives said in an Oct. 26 conference call with investors.

Republic Services leaders also said in an earnings call that despite lower commodity prices, the company was stable due to offsets and contracts with service fees divorced from market pricing.

Gubbels said he’s most worried about OCC, because “we’ve seen the corrugated take the biggest dive.”

“The plastics are down as well, although there seems to be a slight uptick on that, and that was probably more pronounced given how high it had gone, so I’m less concerned about the plastics,” he said.

In the Oct. 26 call, John Morris, WM’s chief operating officer, said the company’s blended average commodity price in the third quarter was about $94 per ton. That was down about 30% year over year. The low price resulted in a 9% drop in overall recycling revenues during that quarter.

These conditions reduced profits in the recycling business by about $36 million, compared with the third quarter of 2021, according to a press release from WM.

“While none of us are happy about the drop and how precipitous the drop was, I think what we’re all taking inventory of is the fact that our recycling business at our MRFs are still producing good returns, good cash flow and margins,” Morris said.

That’s because WM, which is North America’s largest garbage and recycling company, has insulated itself somewhat from commodity market risk by shifting to a fee system model in recent years.

During the call, WM CEO Jim Fish also noted that the company’s recent investments in MRF automation have helped bolster its earnings before interest, taxes, depreciation and amortization (EBITDA).

At Firstar, Gubbels said treating recycling like a utility has helped the company in the long term. More recently, the company put a supply agreement in place for OCC.

“That means unlike in ’09 and even in 2019 when prices for paper dropped and we were in a situation where we couldn’t even sell it, now we have … a pretty good relationship with our contractor, so they’re moving our cardboard,” he said.

While other MRFs in the area are stockpiling OCC right now, which Firstar used to do, Gubbles said “one of our saving graces is the fact that we took the pledge, if you will, that it’s more important to move it than the price at times, which we couldn’t have done until we had on the municipal side a contract that we didn’t have to rely solely on commodity pricing.”

In an Oct. 27 earnings call with investors, Republic Services CEO Jon Vander Ark said strong third quarter results “demonstrate our ability to profitably grow the business and effectively manage our cost structure even with increased volatility in the broader marketplace.”

“Cost pressures remain elevated and more persistent than we originally anticipated. In the face of those cost headwinds, we are leveraging our tools and technology to price ahead of cost inflation and drive margin expansion in the underlying business,” he added. “From our perspective, customer demand remains strong and supportive of continued volume growth.”

Republic reported third quarter revenue growth of 23%, including over 12% from acquisitions. The company purchased US Ecology earlier this year for $2.2 billion.

Vander Ark added that Republic will “continue to increase prices to ensure that all stages of the value chain earn an appropriate return” and said that he remains comfortable about projections despite the recent drop in recycled commodity prices and increase in interest rate.

Brian DelGhiaccio, Republic’s chief financial officer, said in the investor call that commodity prices were $162 per ton in the third quarter, compared to $230 per ton a year prior. That also marks a $56 per ton decline from the previous quarter.

DelGhiaccio said that Republic changed the structure of the recycling contract to include a service fee as part of the base rate and offset some of the volatility.

“The service fee that we’re charging to either actually process the material or to collect that material is going to stay unchanged regardless of what the commodity price is,” he added.

An eye to the future

WM’s Fish said the company is “on track to complete four automation projects and add one new MRF in 2022,” according to a transcript from Seeking Alpha. “The significant investments that we’re making in growing and automating our MRF network are strengthening the business by reducing costs, increasing throughput and improving product quality.”

That being said, in the near term, WM is expecting more market pain. Morris said the company is anticipating a blended average commodity value in the fourth quarter of about $50 per ton, a decrease of about 62%.

Looking forward, Gubbels said he wants to see the commercial recycling side adopt a service mindset on recycling.

“We’re getting there because more and more businesses, even medium sizes and definitely national businesses, have sustainability goals,” he said. “They are more accepting of the idea that recycling is a necessity and as such they have come to realize that their corporate boardroom mandates for achieving zero waste or being landfill free means that it has to go somewhere, regardless of what commodity prices are doing.”