How a county-processor contract addresses equity 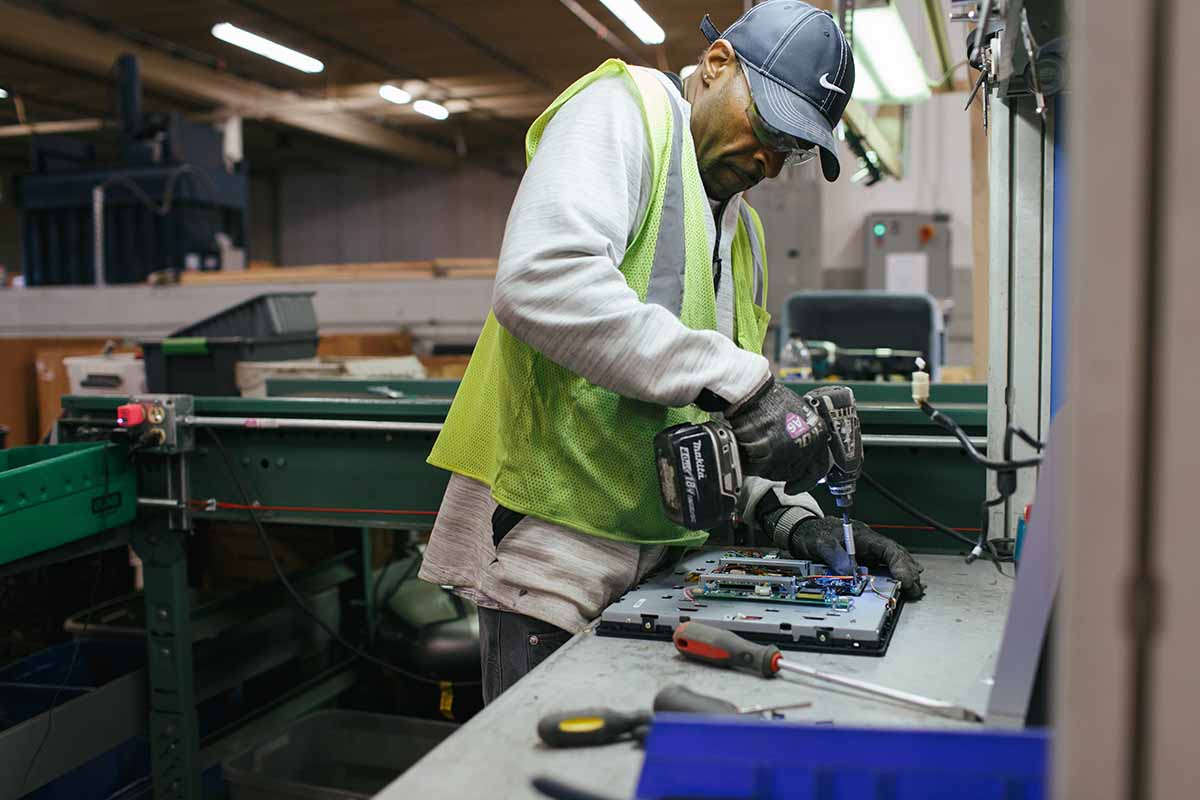 Repowered, formerly known as Tech Dump, has secured an electronics recycling and repair contract with Ramsey County, Minn., which includes the city of St. Paul. | Courtesy of Repowered

A Twin Cities-area nonprofit won an electronics recycling and repair contract with the second largest county in Minnesota, a deal that comes as the company undergoes a rebrand.

St. Paul, Minn.-based Tech Dump, which is now called Repowered, has secured an electronics recycling and repair contract with Ramsey County, which includes the city of St. Paul and is the second most populous county in the state, after Hennepin County.

Ramsey County sees the deal as helping it revamps its electronics recycling system with an eye toward addressing equity and digital divide issues.

“The future e-waste collection system will build public-private partnerships to increase the opportunity for residents to recycle e-waste while addressing equity and economic issues,” according to a resolution approving the contract.

Meanwhile, the nonprofit organization, which has a mission of employing and training people who otherwise face barriers to work, is undergoing a rebrand.

“‘Repowered’ sums up the good things that can happen when we look at the world through a lens of transformation, something we see every day with our IT disposition work, our focus on providing affordable quality refurbished tech options, and of course it highlights the positive outcomes we witness in working with our Work Readiness Employees,” CEO Amanda LaGrange stated in a press release.

Repowered recently announced its contract with Ramsey County, through which it will recycle county residents’ electronics at no charge.

The Ramsey County Board of Commissioners voted 7-0 on April 26 to approve the contract with Tech Dump, which beat out bids from Dynamic Lifecycle Innovations and PCs for People.

The contract, which lasts from May through December 2022 and is subject to three one-year renewals, covers computers (including tablets) and peripherals, networking equipment, printers and copiers, TVs and monitors, audio equipment, home entertainment equipment and other miscellaneous equipment.

Under the agreement, the county will pay Repowered 38 cents per pound to recycle peripherals, printers/copiers, TV/monitors, audio equipment, telephones, home entertainment equipment and miscellaneous items. Repowered won’t be paid by the county for computers, network components or cell phones. The county has budgeted $400,000 for 2022 and $550,000 for each year thereafter for e-scrap expenses – the money comes from a county environmental charge on residents’ trash bills.

A variety of sessions at the 2022 E-Scrap Conference will explore how different processors are growing in response to market conditions. Learn about emerging processor models, how companies are working to positively impact their communities, and what’s happening in the industry M&A realm, among other topics. The conference takes place Sept. 19-21 in New Orleans. Sign up today!

The board of commissioners resolution approving the contract noted that Minnesota has an extended producer responsibility (EPR) law “intended to require manufacturers to bear the full cost of managing discarded e-waste.” But the resolution notes that local governments and retailers are still either subsidizing costs indirectly or are charging residents to drop off material.

“The e-waste law hasn’t worked well for Ramsey County residents because of the fees charged by private and public collection entities,” the resolution states.

The Repowered contract stipulates that if the state law is changed and the changes result in electronics manufacturers paying the full costs to manage e-scrap, Ramsey County will stop paying Repowered for items eligible for funding by manufacturers. 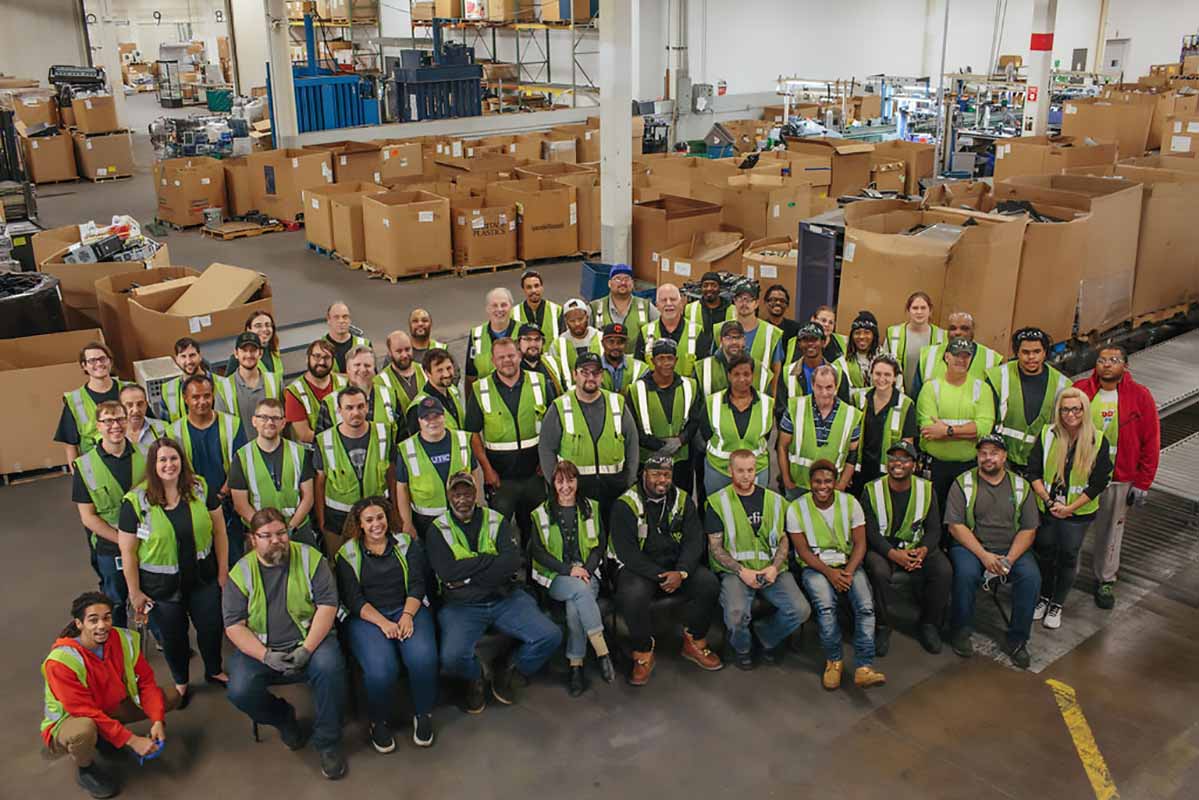 Repowered was originally launched over a decade ago as The Jobs Foundation, a nonprofit focused on providing jobs and training for individuals with barriers to employment, such as a past incarceration, addiction or lack of stable housing.

The agreement also obligates Repowered to budget $10,000 each year to provide free electronics repairs for families at or below 80% of the median income level for Ramsey County, or $51,700 for a family of four.

“This is the first time we are piloting this approach,” LaGrange said in an email to E-Scrap News. “We have never seen this in a municipal contract before, and we have never proposed it. We’re excited to see what we learn, and feel optimistic we may have an impactful model other municipalities can factor into their RFP process and decisions.”

Currently, Repowered is working to launch and improve the collection process, she added. The repair fund will be launched as part of the next phase of the Ramsey County partnership.

Ramsey County sees the contract as part of its larger redesign of its household hazardous waste (HHW) collection program, a revamp that addresses equity and economic issues, as well as environmental ones, according to the county’s resolution.

“This organization has been a critical partner to the County not only for secure electronics recycling but also for providing affordable technology to the community, as we so successfully demonstrated with our collaboration on the 2020 TechPaks project,” said Frank in the press release.

Better reflection of values and mission

The organization’s rebrand includes a new name and logo for Tech Dump and its retail arm, Tech Discounts.

“The spirit behind our new name Repowered more effectively says who we are and what we do best,” LaGrange stated in the press release.

Repowered was originally launched as The Jobs Foundation, a nonprofit focused on providing jobs and training for individuals with barriers to employment, such as a past incarceration, addiction or lack of stable housing. In August 2011, the group held its first electronics collection event, dubbed a “tech dump.” The successful event inspired the organization’s name, “Tech Dump.”

With a decade of growth, including landing multiple municipal and corporate clients, the organization outgrew the “somewhat accidental moniker,” LaGrange stated in the release.

The new name reflects the organization’s mantra that everything and every person has value, according to the release.

“We’ve gotten a lot of mileage out of a spur-of-the-moment name, but we are so much more than just a place for people to get rid of outdated or unwanted tech Items,” LaGrange stated.

A version of this story appeared in E-Scrap News on September 1.