A new approach to sorting containers at MRFs 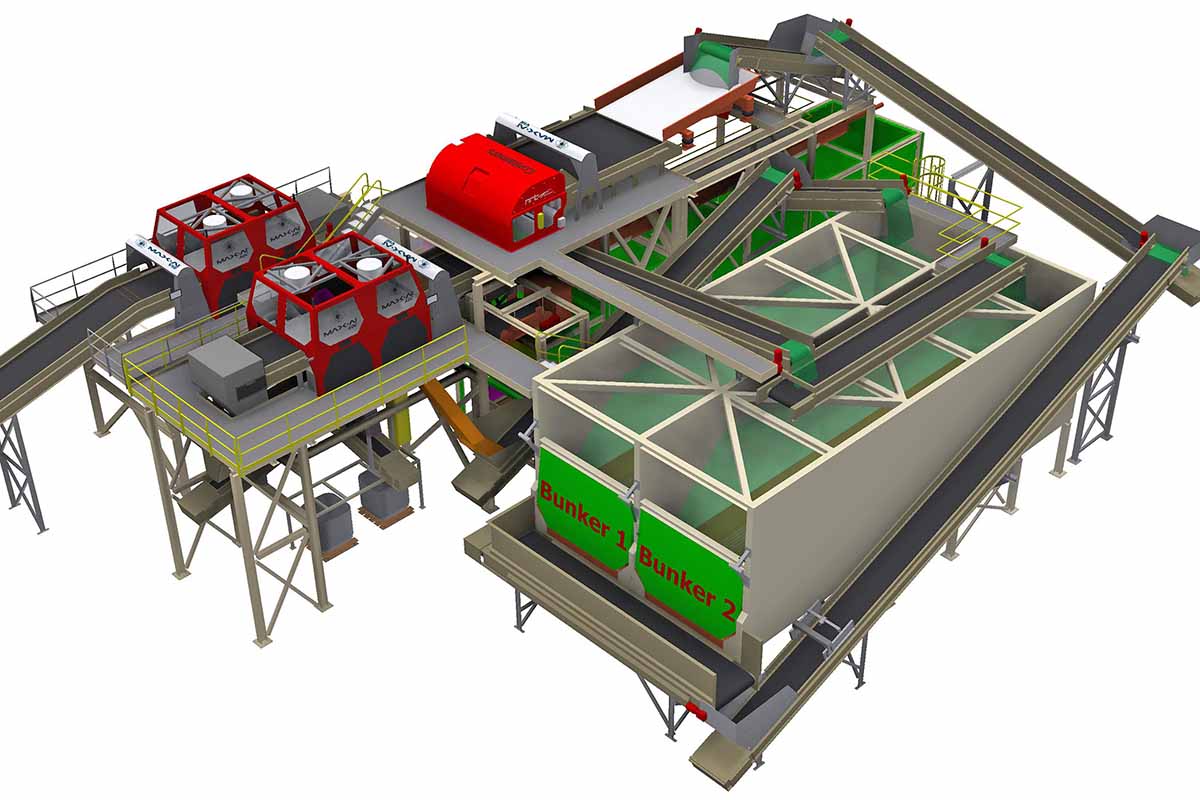 An autonomous system developed by Bulk Handling Systems is really more of a sorting loop than a sorting line.

The recycling equipment manufacturer has sold the first of its container sorting loops to a large waste management company’s Canadian MRF. The system is expected to come on-line at the unnamed facility in the third or fourth quarter of this year.

“The concept … is this system has a volume of material that it’s basically able to continuously process and extract the different valuable commodities from that stream of material, until it’s basically extracted everything,” said Thomas Brooks, chief technology officer for Eugene, Ore.-based Bulk Handling Systems (BHS).

The system, which is currently set up to serve as a single-stream MRF’s container line, uses temporary storage bunkers and conveyors laid out in loops to carry mixed containers through the same AI-powered optical sorter and robotic unit multiple times. With each pass, the computer can automatically reprogram the equipment to pull out a different commodity, until the PET, natural HDPE, color HDPE, PP and aluminum cans have all been removed. Or the system can target one valuable commodity during multiple passes, to ensure high capture rates.

With the circular layout, the robotic and optical sorter can do the work of several units, without the need for human QC, according to BHS.

Around and around it goes

Brooks, who is based at BHS’ optical sorter and robotics facility in Nashville, Tenn., explained that the mixed containers first pass under an AQC-2 dual-arm robot, which pulls out fiber and other contaminants. This robot’s visioning system also analyzes the composition of the stream, gathering data that allows the autonomous system to decide how to best sort the material.

After passing through the first QC robot, the mixed containers then enter a temporary storage bunker. When the bunker is full, the computer releases the material from the bunker and a conveyor carries it to an optical sorter equipped with an AI visioning system and near-infrared detection. If the optical sorter is programmed to remove PET, for example, then the ejected PET goes to another AQC-2 dual-arm robot to further clean the PET stream. After that, the clean PET goes into a bunker (or bunkers, depending on how much material the computer sees in the stream and how many bunkers it decides to allocate for the plastic), before baling.

In this scenario, the mixed containers that weren’t ejected by the optical sorter – essentially everything other than PET – are conveyed back to the temporary storage bunker, before the computer releases them for another pass through the sorting equipment. If, for example, the value of PET is particularly high and the MRF operator wants to ensure all of it is captured, the computer could give the optical sorter another pass to pull out any PET that was missed on the first try. Or the system could move on to the next most plentiful commodity in the stream.

The first system sold to the Canadian MRF is located in a province with a bottle deposit program. As a result, the second AQC-2 robot won’t just be pulling contaminants out; it will also separate deposit containers, Brooks said.

The system can sort 6.5 tons per hour, and because no human sorters are needed, it can run almost 24/7, with only one or two hours a day needed for maintenance, Brooks said.

“The beauty of this is it’s set up to run continuously, independent of what your manpower resources are,” he said.

Brooks said the system was only made possible by technological advances over the years. “We had to put together a bunch of building blocks to get here,” he said.

Key steps were the development of the MAX-AI robotic system, which uses a visioning system to identify materials by appearance; BHS’ Total Intelligence Platform, which uses sensors and software to provide real-time data on MRF performance; and the pairing of the AI-powered visioning system with optical sorters.

As opposed to a line, the loop approach also allows for a much smaller footprint, in the range of one-sixth or one-fifth the size of a linear system, Brooks said. That makes it ideal for urban facilities without much available space.

Brooks noted that the system would also work for smaller municipalities that have too much material to sort manually – especially with difficult labor markets – but not enough to justify buying half a dozen optical sorters and robots.

In terms of cost, BHS has initially priced the system at only slightly more than what it would cost to buy each of the pieces of equipment separately, he said. The slightly higher price – in the range of 2-3% – is a recognition of the value of an autonomous system, he explained.

BHS didn’t jack up the price because “we really view this as kind of an enabler that we see going forward, not only for our company but really just trying to drive an initiative toward recycling and recovery,” he said.

BHS has a patent covering how the system gathers data and decides how to move and sort material – essentially the humanless decision-making process. This first container loop is a jumping off point for other systems with autonomous control, Brooks said.

“I have this dream of a lights-out facility, where material is brought in, it’s all processed, processed material is run out the back, and you have one or two maintenance personnel that are running the whole thing,” Brooks said. “Some people tell me that’s a little bit of a pipe dream, and I’m OK with that.”

A version of this story appeared in Plastics Recycling Update on July 19.