In My Opinion: What teens suggest about recycling’s future 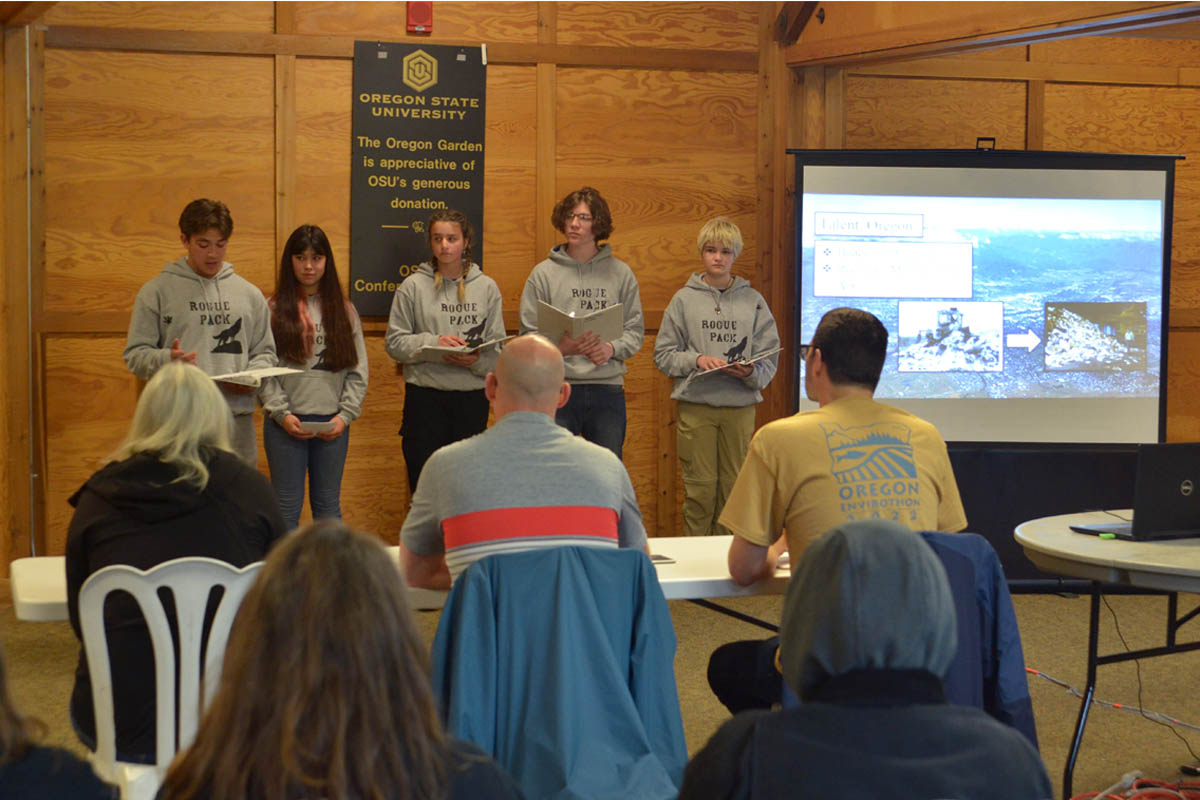 The student team “The Rogue Pack” presenting at the 2022 Oregon Envirothon.

The scene is Oregon Envirothon’s “Waste to Resources” station, where teams of high school students huddle around outdoor tables taking tests to demonstrate their knowledge of materials recovery.

Sitting nearby are boxes of treats brought in for the young competitors and event volunteers. I peek in a trash bag labeled “recycling” and see several Cheez-It and Rice Krispies Treats wrappers there. Keep in mind, both of these multi-layer flexible packages are produced by Kellogg’s, and while the Cheez-It wrapper carries a How2Recycle label indicating it’s a multi-layer pouch and should be trashed, the Rice Krispies Treats wrapper carries no recyclability labeling at all.

If those multi-material items do make their way to a recycling facility, they’ll be disposed of, because downstream plastics reclaimers wouldn’t want them.

It’s a sobering situation. If intelligent, driven students at an event geared toward science education fail to identify whether what’s in their hand is recyclable, is there any real hope?

Interestingly, I believe so. I’ll tell you why.

Motivated enough to dive in

In many ways, the existence of Envirothon is enough to sew some seeds of optimism. On the day of the Oregon event, 140 students from 13 high schools cared enough to show up, and they weren’t getting paid a dime for any of it.

Envirothon is North America’s largest high school environmental education competition. Held May 6, the Oregon Envirothon was one of many such events taking place around the country to select teams to advance to the national Envirothon competition, which is scheduled this year for late July at Miami University in Ohio.

In the leadup to the competition, the high schoolers studied a variety of ecological issues, which this year included waste and recycling. They faced questions I suspect most adults would struggle to answer: What is the difference between recycling and waste prevention? What does the idea of “the Global North dumping its dangerous waste on the Global South” actually mean?

I couldn’t help but contrast these kids with myself at their age, when I was busy playing Nintendo 64 or rollerblading around town in my free time, not volunteering to study and propose fixes to a widespread societal concern.

In Oregon, the Envirothon came at a particularly pivotal time, as the state’s recycling system is on the cusp of change. State regulators are working overtime to begin implementing the recently passed Plastic Pollution and Recycling Modernization Act, which will establish standardized statewide “accepted materials” lists, use producer dollars to insulate MRFs from the vagaries of commodity markets, regulate bale quality and downstream shipments, and a lot more.

This year’s Envirothon pushed the Oregon high schoolers head-first into the bill. I was there as one of three recycling experts who volunteered to judge finalist oral presentations from two high school teams.

The two squads, the Sustainable Salamanders from Churchill High School in Eugene and The Rogue Pack from Logos Public Charter School in Medford, were presenting mock recommendations to local government electeds on what resources or decisions their communities should ask of the Oregon Department of Environmental Quality (DEQ) as the department implements the act.

What I learned from the presentations was eye-opening and could offer some insights into general public knowledge and attitudes about today’s recycling challenges. 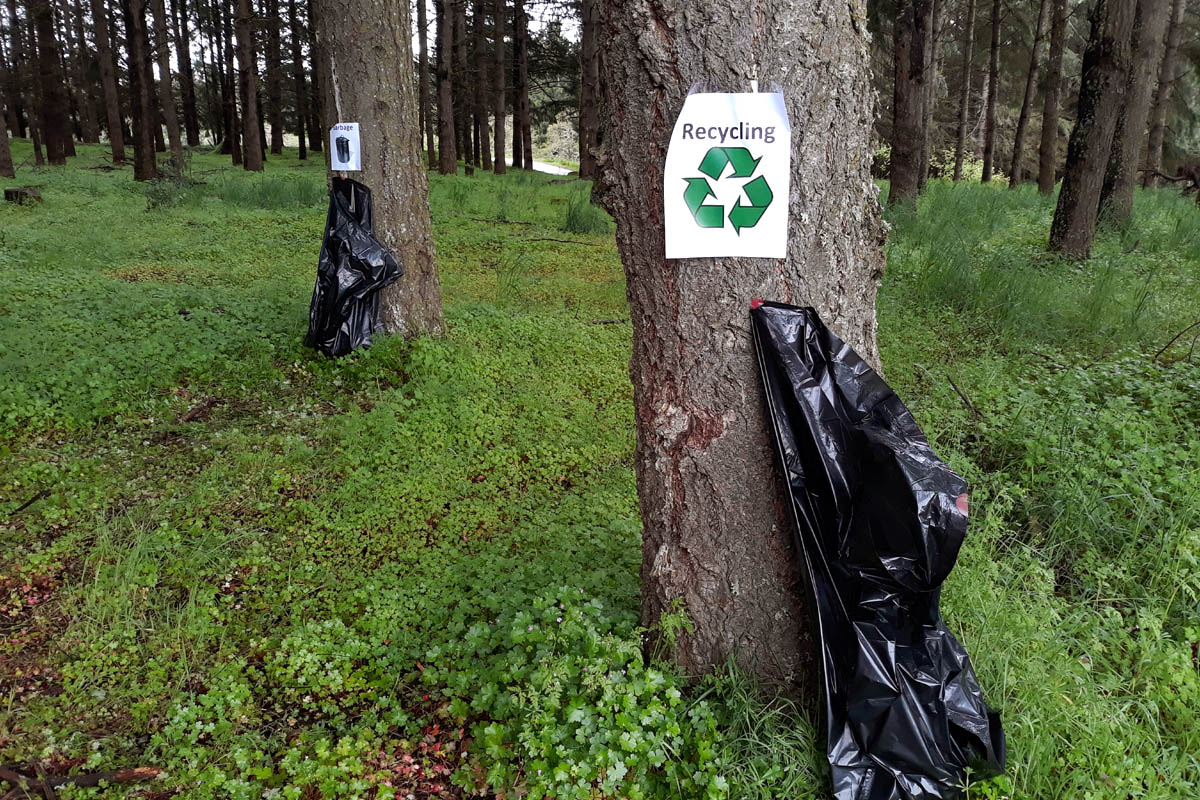 To twist the oft-repeated James Carville quip from the 1992 presidential campaign, “It’s the plastic, stupid.”

Save for a thoughtful discussion about organics diversion benefit, the teams focused almost exclusively on plastics. I could have pointed out that the majority of curbside weight and commodity revenue comes from fiber, or I could have asked about the enormous greenhouse gas benefits of recycling energy-intensive aluminum, but I suspect it would have been akin to speaking Hmong in a Basque village – the language they speak is plastics and the dialect is waste.

And that’s not exactly a shocker. When state or federal elected leaders talk about fixing America’s “broken” recycling system, when activists portray recycling as a “sham,” or when media headlines decry recycling “myth,” they’re largely talking about plastic.

I suspect the younger generation has internalized the political and media narratives about recycling, and that they, like the rest of us, are somewhat confused about the path forward. On one hand, the public hears that plastic destroys our environment and needs to be banned away because it can’t be recycled, and on the other they hear that it’s truly the green choice and that “advanced recycling” technologies are going to recycle it all someday.

At Envirothon, one team asserted that the solution to recycling post-consumer plastic was to put it all into a pit with organisms that would break it down into a “sludge,” which manufacturers would buy to make new plastic. When pressed by a judge on some of the wider impacts of their proposal, the team noted that low-income people would still be able to redeem containers in Oregon’s deposit system to earn money; the pit would come after the cans and bottles were collected.

The other team seemed to equate curbside plastic packaging with hazardous materials disposed of in specially regulated landfills.

Interestingly, both teams said they’d urge bans on certain single-use plastics. Keep in mind, one team was from uber-liberal Eugene, and the other was from the deep red Rogue Valley. In addition, Envirothon brings together students pursuing natural resource extraction careers and enviro-minded aspiring researchers, with an ample number of Future Farmers of America (FFA) adherents. I didn’t poll the kids on their (potentially still nascent) ideological leaning, but I’ll bet there were some pretty conservative youths among the group, and they weren’t objecting to product bans.

At the same time, when the conversation moved beyond plastics, the high schoolers were able to demonstrate levels of knowledge and analysis that left me feeling hopeful.

The teams seemed to fully understand the benefits that statewide recycling lists will provide to alleviate confusion, and they grasped the central role that producer funding will play in expanding access and bringing stability to the system. They recognized the role recycling serves in reducing greenhouse gas emissions.

Finally, they articulated the fundamental unfairness of providing less recycling access to apartment renters, and they displayed a clear understanding of the injustice of siting polluting waste and recycling facilities in historically disadvantaged neighborhoods.

The Oregon Pollution Prevention and Recycling Modernization Act is not a simple bill, and the myriad challenges facing the industry aren’t simple. But rather than phone it in, these kids dove in head first, and that is simply inspiring.

As I finish filling out my primary election ballot before election day (May 17), I can’t help but wonder if I’ll recognize some of their names and faces in a statewide voters’ guide someday. I’m hopeful I will.

Associate Editor Jared Paben has worked for Resource Recycling since December 2014. He can be contacted at [email protected]