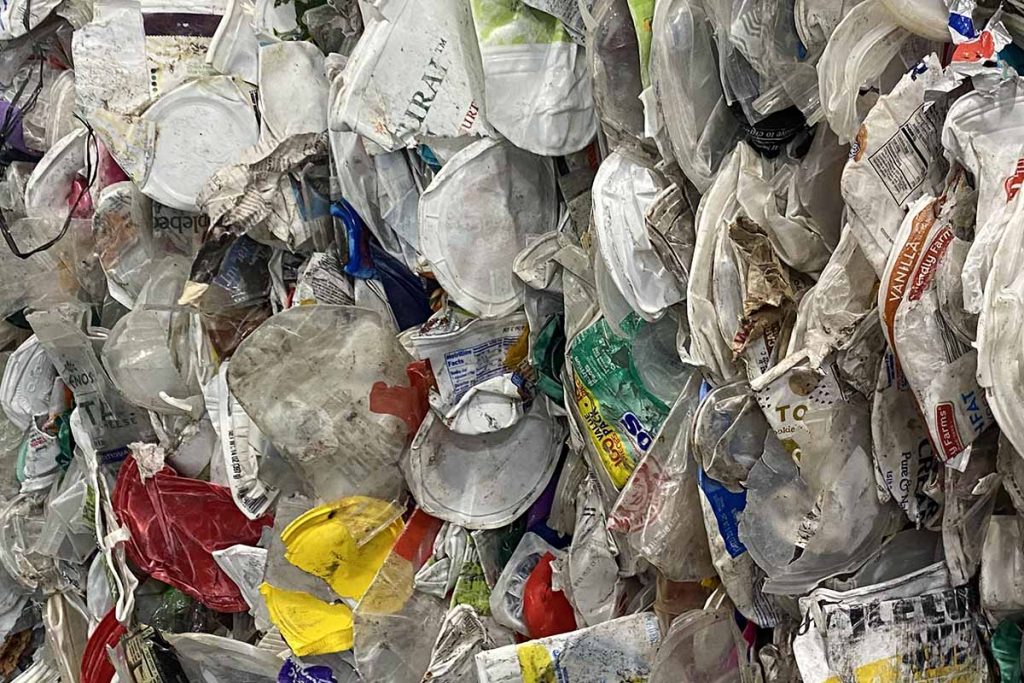 Secondary-sortation sites run by AMP Robotics are targeting a wide variety of materials that come from MRFs and other sources. | Courtesy of AMP Robotics

AMP, a provider of AI-powered robotics, started testing the secondary-sort concept in Denver, where the company is headquartered. AMP transitioned that pilot project into a commercial-scale facility in early 2021.

It added an additional site in Atlanta in late 2021 and then brought a Cleveland facility on-line earlier this year.

The three sites, which range between 50,000 square feet and 120,000 square feet in size, each take in between 2,000 and 3,000 tons of material from MRFs, plastics reclaimers and other suppliers each month, Horowitz noted.

The facilities employ workers to maintain equipment, feed material into the system and move bales. But all of the actual sortation is done by the company’s robotic units.

Horowitz declined to share the total investment in the secondary-sort project.

In a press release, the company said it plans to introduce additional secondary-sorting facilities in the latter half of this year. AMP is looking to establish supply relationships to accept or buy residual bales from other waste management companies.

Horowitz said AMP is currently partnering with dozens of MRFs and a smaller number of plastics reclaimers to garner supply.

He said AMP will pay for bales of mixed plastics and other materials. For some loads of residuals, AMP charges a tipping fee that is lower than what the supplier would pay to send the material to disposal.

“We have a whole continuum based on our end markets and also the innate value of the materials,” Horowitz said.

Over the last decade, a handful of ventures have experimented with the secondary-sortation model, but most have fizzled. Titus MRF Services in 2020 closed down its Los Angeles-area secondary sorting facility, citing difficult commodity markets. QRS ran plastic recovery facilities in the eastern half of the U.S. but closed them starting in 2016, culminating in the January 2021 sale of QRS’s St. Louis plastics recycling company Re-Poly.

Horowitz said he believes AMP can succeed in the space because the robotic technology allows the operations to create very specific product blends for different end markets. The company’s sites are also sorting out fiber grades, whereas previous secondary-sort facilities targeted plastics primarily.

AMP is also entering the sort game at a time when brand goals and recycled-content mandates are driving new levels of demand for recycled commodities.

“We would argue that AI and robotics are particularly well-suited to secondary sorting,” Horowitz said. “[The line] can be adapted quickly to commodity pricing.”

Horowitz also said he sees growing opportunity to work with chemical recycling operators, which turn recovered plastics to a variety of chemical products. Many such projects have been announced, and only a handful are operating at scale. But Horowitz said AMP’s facilities have been able to deliver loads at the proper spec for the different processes.

“We’re excited about capacity that’s being built up right now,” Horowitz said of chemical recycling. “Some of them can be very particular about the particular resins they need, and we can teach that to the AI.”

Although robots can’t perform nearly as many sorts per minute as optical sorters can, they’re able to perform a bigger variety of sorts on lower-volume streams, generally with less capital investment. At MRFs, they’re frequently used on last-chance lines to recover saleable commodities that were missed by earlier screens, magnets and optical sorters and may otherwise head to landfills.

AMP’s press release noted the company’s secondary sortation business model also “introduces market certainty, lower disposal costs, and new revenue streams for established MRFs by creating a destination for residue that they would otherwise have to pay to landfill, as well as demand for mixed or impure plastic streams that may not have strong end markets.”

For its part, AMP disclosed that it has deployed about 230 sorting systems in over 80 facilities on three continents. The AI recognition abilities are now supported by a catalog of images of over 50 billion containers and other packaging types. The company’s release notes that it’s working to improve the ability to identify particularly challenging packaging types.

“These advancements in material recognition continuously improve performance for our customers and open the door to other categories of packaging that have been historically challenging to identify, such as plastic films and flexible packaging – an area we’re heavily focused on in new product development,” Amanda Marrs, senior director of product, stated in the release.