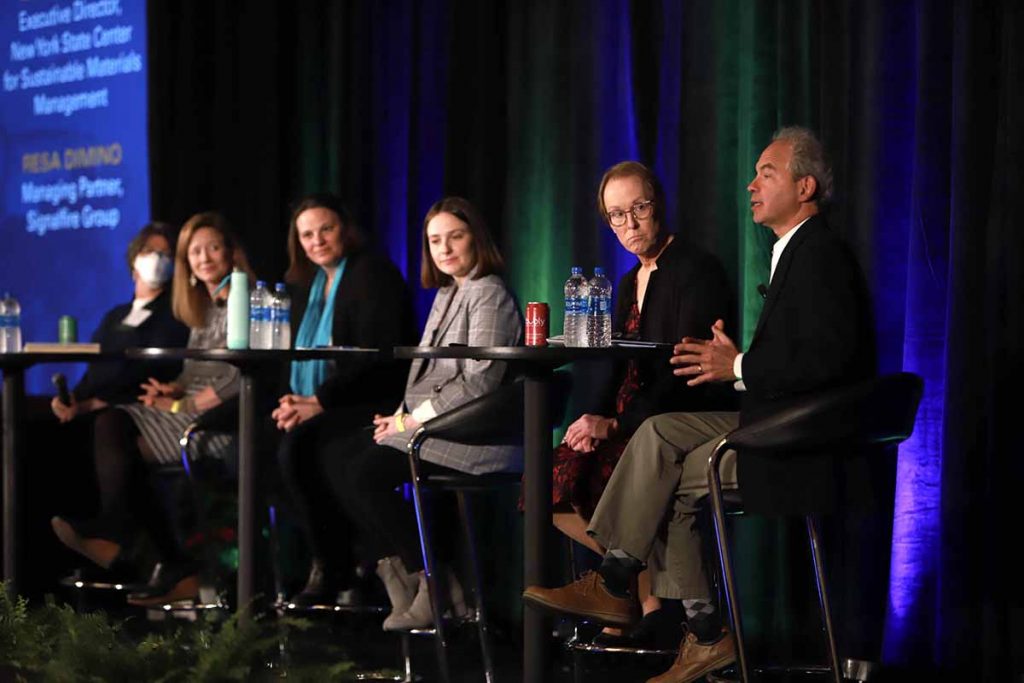 Interest in minimum-recycled-content mandates and extended producer responsibility bills is at an all-time high, but the reality of passing legislation is more complicated, according to industry experts.

The first day of the 2022 Plastics Recycling Conference, held outside Washington, D.C., included a pair of policy-focused sessions that drew standing room-only crowds. It was the latest sign of the attention recycling policy is receiving, both inside the Beltway and beyond.

Recycling is “one of those few things that can really attract people from both sides of the aisle,” noted David Biderman, executive director and CEO of the Solid Waste Association of North America (SWANA).

Resa Dimino, managing partner at consulting firm Signalfire Group, said policy is necessary to drive the industry forward. Supply is dependent on consumers, who do not see themselves as the start of the supply chain.

“Inconsistency of economic feedback means they’re not really functioning in that conventional supply-demand dynamic,” she said.

And while corporate minimum-recycled-content promises are positive, they’re not stable, she said.

Another panelist, Kate Davenport, co-president of Eureka Recycling, echoed those sentiments around instability. Eureka Recycling is a nonprofit MRF operator in the Twin Cities area.

“Brands, you called me and asked for content and then disappeared three months later when the price of virgin went really low,” she said.

That’s why policy is needed as a consistent driver, Dimino and other panelists said, noting there has been a flurry of policy activity at the state and federal levels in the past few years.

A handful of bills passed Congress this year to provide more funding for recycling, Biderman said, including the RECYCLE Act for outreach and Save Our Seas 2.0 for solid waste and recycling infrastructure. The Recycling Infrastructure and Accessibility Act was recently  introduced along with the Recycling and Compost Accountability Act data.

“There continues to be a high level of activity and interest in moving recycling forward,” he said.

Maine and Oregon became the first states to pass broad packaging extended producer responsibility (EPR) bills in 2021, but nothing along those lines is moving in Congress, Biderman added.

Panelists said EPR bills are solid policy solutions, but they need to consider all stakeholder needs to be effective, have high standards and flexibility for different states and situations, and be packaged with other solutions such as bottle deposit bills.

Davenport said MRFs mostly handle paper and glass, not plastic, so “we really need to hold that perspective in our policy design.”

“Those players really need to come to the table and these policies need to be very localized and flexible in their design,” she said. “It has to be a multi-stakeholder governance model and I think it’s going to have to be really contextual state by state in terms of what that looks like.”

She added that recycled-content mandates will not be enough to solve supply issues but should be combined with bottle bills.

Eadaoin Quinn, director of business development and procurement for EFS-plastics, said she prefers systems that allow and encourage competition, because it makes reclaimers “nervous to only have one supplier in a particular area.”

“I would also like to see more on eco-modulation,” Quinn said, because producers that are choosing to use more environmentally friendly materials “should have to pay less than producers who are not paying attention to those things.”

“It isn’t a program that’s going to work particularly well,” Dietly said, because the state’s Department of Environmental Protection is in charge of administering the entire system.

“Assuming DEP gets appropriated the funds to even start on that, it will then have to go through all of that process itself,” Dietly said. “I’m not hopeful that’s going to work terribly well, as it doesn’t in other jurisdictions.”

Heather Trim, executive director of Zero Waste Washington, said “the Maine model was basically writing a check, so we did not like that in Washington.” The Washington state legislature recently failed to pass an EPR bill.

Instead, the bill she promoted was trying to “thread that needle of producers still having high standards and municipalities and the waste industry having a large voice.”

Kate Walker, executive director at the New York State Center for Sustainable Materials Management, said New York state is currently considering an EPR bill and she was able to learn from Trim’s work.

“Thank you, Washington, for getting all the bruises first,” Walker said, adding that she was “really hopeful in New York we’ll bring it across the finish line.”

While the discussion over the merits of each type of bill continues, Biderman reminded panelists that “the enemy of excellence is perfection.”

“Every day, thousands of units of recyclable plastic end up in a trash can,” he said. “We need to do a better job and I don’t have a dog in the fight about how we get there.”

A version of this story appeared in Plastics Recycling Update on March 7.