How one operator forged a path on electric collection trucks 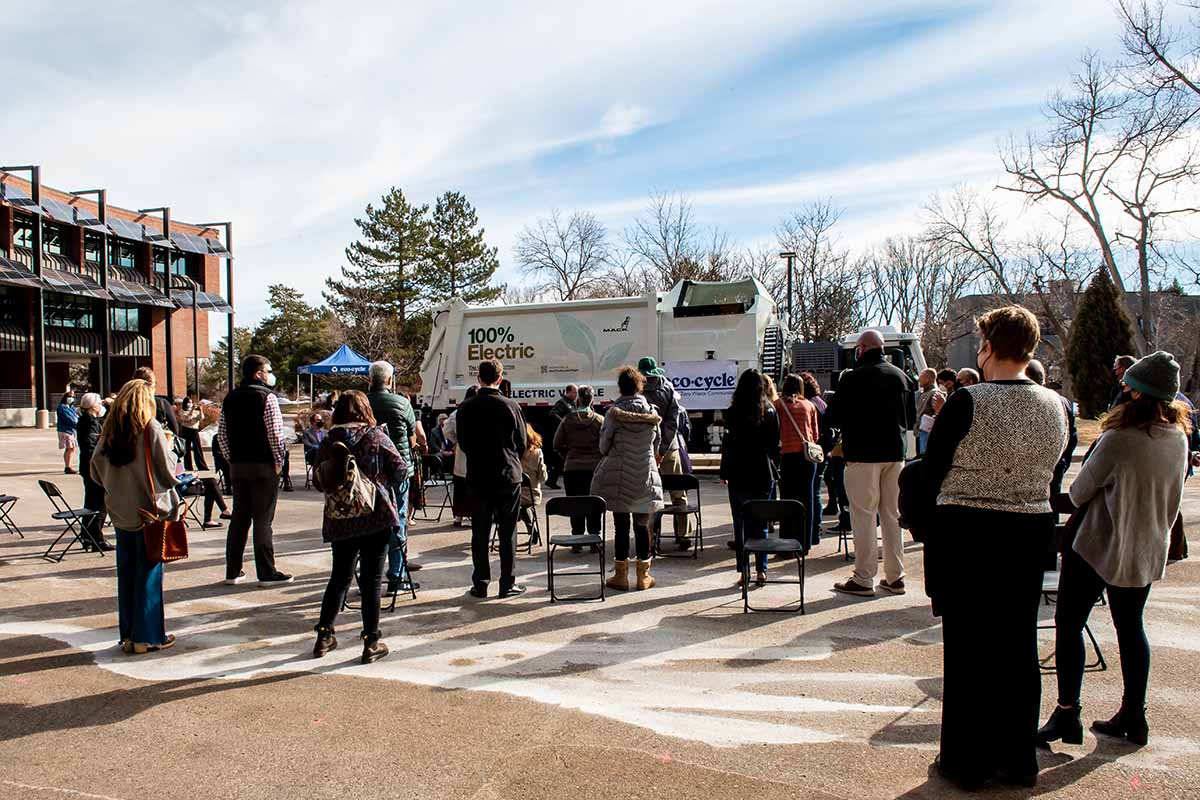 Nonprofit hauler and processor Eco-Cycle is bringing the first electric collection truck to Colorado’s streets, but it took a series of other firsts – and plenty of patience – to get there.

Justin Stockdale, Eco-Cycle director of zero waste hauling operations, told Resource Recycling the process has been “daunting, exciting, scary, fun, all of the above.” The vehicle will be used on organics collection routes.

The truck is a Mack LR Electric, purchased from the Denver branch of Bruckner’s Truck & Equipment. It’s Mack’s first direct sale of the vehicle to a private company. The model has been in testing on the East Coast for several years.

Stockdale said Eco-Cycle has a history of leading the way on programs, like when it started one of the first curbside recycling programs in the early ’70s in Boulder. The electric truck is an example of “Eco-Cycle trying to take some of the riskier challenges on,” Stockdale said. “We can take the risk for others to follow.”

The truck has twin electric motors that give 448 continuous horsepower and 4,051 pound-feet of peak output torque, along with a two-speed Mack Powershift transmission, mRIDE suspension and Mack’s proprietary S462R 46,000-pound rear axles, a press release said.

Four lithium-ion batteries power the truck, and a two-stage regenerative braking system will help account for the truck’s increasing load throughout the day by recapturing energy from the frequent stops. The truck will travel an estimated 15,000 miles each year, reducing greenhouse gas emissions by 2,500 tons over the vehicle’s lifetime.

Brian Bruckner, president of Bruckner’s Truck and Equipment, said in the press release he thinks “electric vehicles are the future for commercial trucks as our industry pushes toward zero tailpipe emissions.”

While Mack and Eco-Cycle are not sharing the price of the truck, Stockdale said it costs two to three times more than a conventional truck; however, that includes the charging system and new power lines to the company site.

“It’s a big investment,” Stockdale said, but a grant from the ALT Fuels Colorado program will pay for the difference between a conventional truck and the EV. The grant awarded was just under $485,000.

Stockdale started at Eco-Cycle in 2020 and learned that there were several holes in the truck fleet that needed to be filled, especially for organics collection.

Because Eco-Cycle is a nonprofit entity, it rotates its vehicles out far less often than other companies, Stockdale said. It’s still running some trucks from the 1990s, so he knew whatever he bought would need to be future-proof.

He looked to see if there was any state grant funding for companies looking to move to alternative fuels, and the ALT Fuels Colorado program popped up.

The next step was finding a company that made electric commercial refuse trucks. Mack quickly came to the forefront with its years and depth of experience, Stockdale said, with one problem: Mack had never agreed to sell one of the electric trucks it had been testing.

Stockdale ended up going to the Waste Expo show in Las Vegas to meet with Mack corporate representatives, and “it was on that showroom floor that the deal came together last year,” he said.

Mack looked at how the truck would be used before entertaining a conversation about selling it to Eco-Cycle, Stockdale said, because “they did not want to see this truck sent out there to fail.”

“That gave us a lot of confidence,” Stockdale said. “Mack is super thoughtful about success here.”

Even though the Mack LR Electric was pricier than some other options, it comes with a six-year service agreement for maintenance. Mack also trained the local dealer network to care for an electric truck and did upgrades on the local shop to prepare it to service the truck.

A series of firsts

From there, Mack needed to figure out how to price and sell the truck for the first time, and then Stockdale had to work with the local utility company to see if a charging station was possible.

Xcel Energy was working on a program to support Class A vehicle charging systems, but “they had not defined it or even put pen to paper” when Stockdale approached them, he said. And the grant program had never considered funding a Class A electric vehicle, he said. A Class A vehicle is one that weighs more than 26,000 pounds and typically includes commercial vehicles with trailers or semi-trailers with two or more axles.

“It forced a lot of activity. It was a whole series of firsts,” Stockdale said. “As it turns out, every step of the way has been really hard. It’s been a lot of diligence to work through all these firsts and we’ve had to naturally be very patient.”

It was worth the work, Stockdale said, to be leading the way for others to follow.

Eco-Cycle chose to go electric for a number of reasons, Stockdale said, including that transportation is the largest source of greenhouse gas emissions in Colorado. Another benefit is he predicts maintenance costs “really plummeting” for electric vehicles. The regenerative braking system on the truck takes the burden off the brakes, and traditional preemptive maintenance needs are slim.

The truck will run early in the morning and in the middle of the day and charge overnight, so Eco-Cycle will also get the benefit of cheaper nighttime electricity rates.

The truck won’t be delivered until midsummer, but Stockdale is already looking ahead.

“Our hope is that this is the first of several EV acquisitions, but the next hurdle for us is solar or some other alternative energy production here on site,” he said, so the truck operation is truly zero emission.

“It’s not lost on us that running on electric is great and running on alternate power is even better, but in the end, the minerals we need to support the battery demand, that is only going to grow,” he said. “Just like everything else in the recycling bin, recycled is a good alternative to virgin material.”

Solar energy production is another expensive investment, but Stockdale said he expects to see more federal and state money steered toward alternative energy in the near future.

“Ultimately, our goal is if the technology works and we have a good experience with the truck, I could see our entire fleet being EV in the not-too-distant future,” Stockdale said. “To be insulated from fuel costs as a hauler is a holy grail, and with on-site solar we will have that ability.”