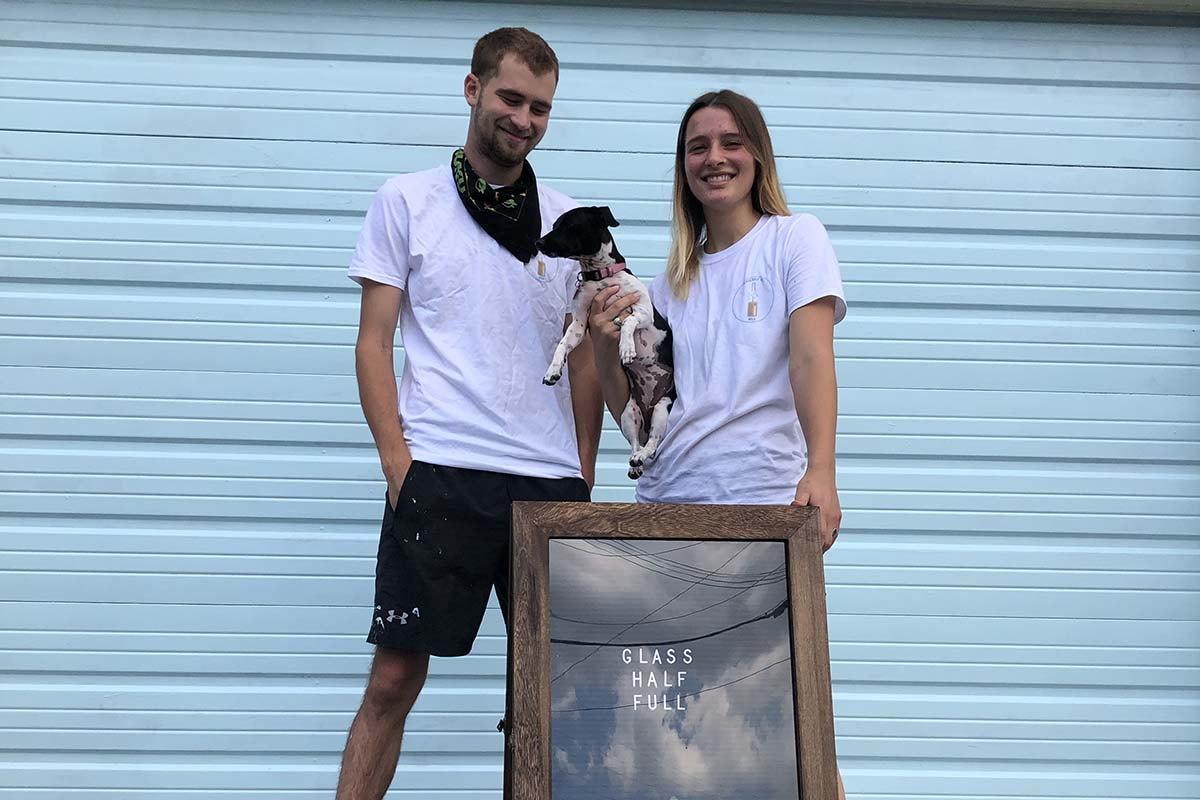 Glass Half Full founders Franziska Trautmann and Max Steitz, with the team Mascot, Miss Tchoupitoulas. | Courtesy of Glass Half Full

Many people have backyard projects, but very few expand those projects into a 40,000-square-foot glass recycling facility and a federally funded research project.

For Glass Half Full co-founder Franziska Trautmann, it all happened organically, though quickly.

Trautmann and her co-founder, Max Steitz, were seniors at Tulane University in 2020. She said that over the course of their college careers, they had produced a decent amount of glass bottles, and always wished they could be recycled. However, New Orleans, like most of the state, does not have glass recycling facilities.

“One night over a bottle of wine, we said, ‘Hmm, why does it have to go to a landfill? Could we do something about this?'” Trautmann said. “So we decided to start what we thought would be a very small project to recycle glass in our friend group.”

That small project grew into a company that, today, collects over a million pounds of glass a year from around the city and grinds it into sand, which is used in sandbags to prevent flooding during hurricane season.

‘Waited years for this’

They started hand-crushing glass in the backyard of a fraternity in February 2020. Trautmann said they relied on a GoFundMe campaign to raise the initial capital, expecting a few friends to contribute. Instead, the donation page and the idea spread rapidly.

“All of sudden all these people were donating and really excited about the idea of getting recycling in New Orleans, saying ‘Oh, I’ve waited years for this. It’s about time we do something,'” she said.

That’s when the pair decided to “go big, and do it to the best of our abilities.”

With crowd-sourced community funding, they moved the operation to a small warehouse, then to a 40,000-square-foot facility in August 2020. Today, Glass Half Full employs five people and relies on a force of 1,000 volunteers to collect 100,000 pounds of glass a month through neighborhood pickup and drop-off programs.

A 2019 state report found that Louisiana’s overall recycling rate is 5%. Only 2,873 tons of glass was recycled in 2019. Of the 28 entities that submitted data for the report, 16 reported having no recycling activities at all in their jurisdictions.

Trautmann said she found a community desire to reverse that trend. Local buy-in made the grassroots project the success it is today, she said, and not just in the form of money. When the group runs into a problem, the call goes out for help, and the community steps up.

For example, Trautmann said there was an electrical problem at the facility, so she asked for help, and a local electrician came by to fix it. 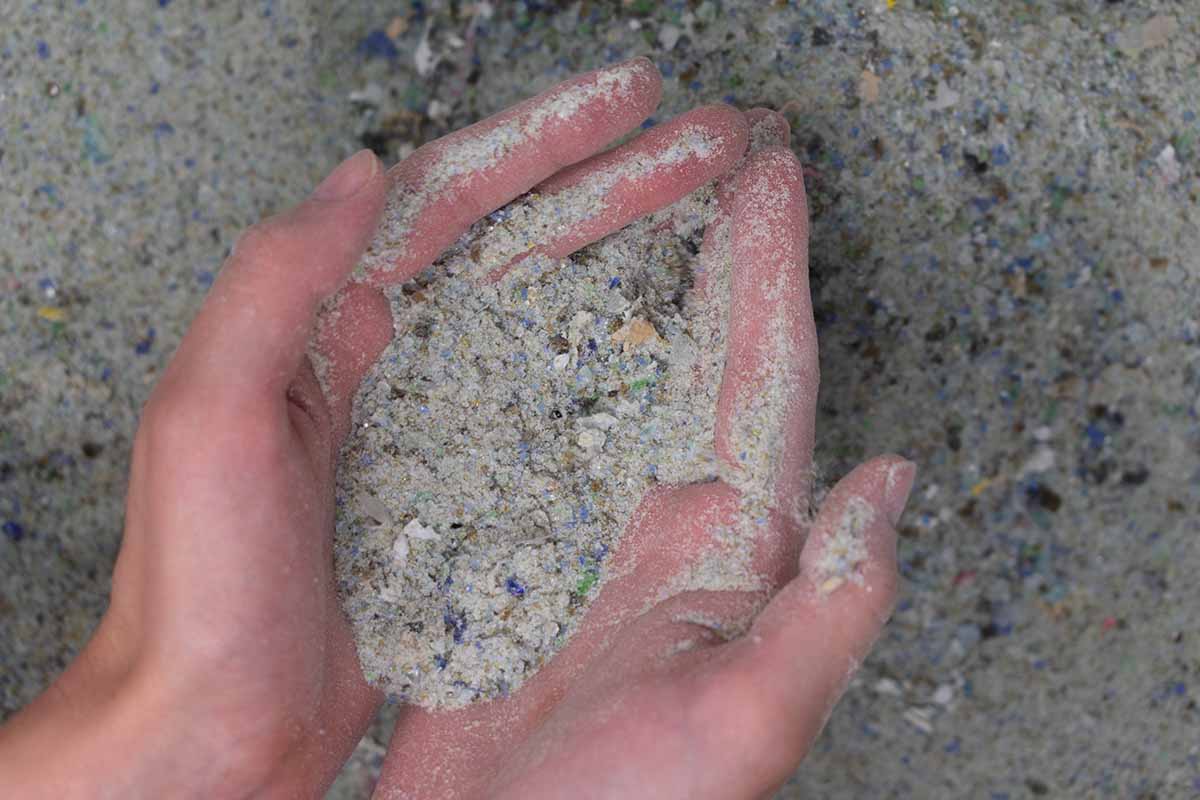 At Glass Half Full, glass is crushed into sand for a variety of uses.

The Glass Half Full team collects the glass, sorts it and then grinds it into sand or glass cullet. Most of the sand so far has gone into sandbags for use during hurricane season, including when Hurricane Ida struck last summer, but some of it also goes to a Tulane University research program. A National Science Foundation grant for just over $700,000 is funding the university research into the feasibility and environmental safety of using recycled glass for coastal restoration.

The grant synopsis said the project aims to establish recycling programs in coastal communities to divert glass from landfills, turn it into sand and use it to restore coasts and preserve historic sites, including local Native American cultural sites that are threatened by land loss.

Trautmann said the ultimate goal is to use the recycled sand to restore Louisiana’s shoreline, because the state has lost a quarter of its wetlands since the 1930s and erosion is a growing problem.

A small amount of sand is also sold to gardeners, landscapers, construction businesses or other manufacturers.

Most of the money for operations comes not from selling the sand, but from the $25 per month residents in Orleans Parish and Jefferson Parish pay to have their glass picked up by Glass Half Full.

Trautmann hopes to continue scaling up, not just to the entire city, but to the entire state of Louisiana. To do that, she’s hoping to move to a larger facility in the next two years at an estimated cost of $1 million.

The GoFundMe campaign has raised about $91,000, but Trautmann said Glass Half Full has also gotten several checks, including one for $32,000 from Dirty Jobs television host Mike Rowe through his show Returning the Favor, and $10,000 from the Corona beer brand.

Along with providing her community with recycling infrastructure, Trautmann hopes to “reimagine recycling” from a mystery where people put an item in a bin and never see it again to a transparent process that local people see the direct benefit of.

“You drop off glass in the summer and then come August when hurricane season comes, you can pick up sandbags and see we’re doing something with the glass,” she said.

Expanding access to recycling is also important to the company, so Trautmann also started a nonprofit group called Glassroots, which is focused on recycling education, coming up with creative ways to reduce waste and aiding in disaster relief.

“We’re re-imagining it as a movement to lift our state up from where we’re at, which is last place in sustainability, and re-educate people on why it’s important and how we can do better,” she said.