Coca-Cola has a goal to use 50% PCR by 2030 in its packaging portfolio. | Dilok Klaisataporn / Shutterstock

A leader at Coca-Cola estimates the beverage giant will approach 20% recycled PET use by the end of 2021.

Ray said recycling is a “critical component” in the company’s sustainability work, and she noted materials recovery is central to Coca-Cola’s World Without Waste goal that was set in 2018. That program has several components.

“Number one, we want to help collect back every bottle and can so they don’t end up in a place they shouldn’t be,” Ray said. “Number two, we want to make sure everything we put out into the market is recyclable, because the third piece of this is we actually want to leverage 50% recycled content in our packaging portfolio.”

Ray delved into the company’s recent recycled plastic work and discussed the financial stability of the plastics recycling sector. She also identified areas for industry improvement, primarily in generating a larger supply of post-consumer resin.

Coca-Cola in February announced a 100% post-consumer resin (PCR) 13.2-ounce container as well as 100% PCR 20-ounce bottles for its flagship brand – both are available in select regions of the U.S. 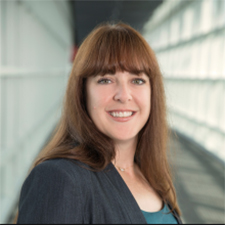 Ray said these projects were in the works for more than a year.

“It’s so exciting when we’re able to work with our supply chain, our RPET converters, to get that much recycled content PET into our package,” Ray said. “It’s a big deal.”

She added the company is planning on-package labeling that talks about Coca-Cola’s bottle-to-bottle initiative and how to properly recycle the bottles.

“For us, that’s really exciting, we’ve got to get the consumers excited [so] that they want to recycle, they see that it can come back as another bottle,” Ray said.

Coca-Cola has a global goal to use 25% PCR by 2025 and 50% by 2030 in its packaging portfolio. But in the most recent Ellen MacArthur Foundation audit charting big brands’ recycled material use, Coca-Cola reported that it currently uses about 10% PCR across its portfolio.

But despite the company’s confidence that it will reach its RPET goals, Ray said recycled resin supply remains a concern.

“There comes a point … where we need to make sure that all the systems are ready for this, because we’re not the only ones making goals. That’s the great part – the other CPGs are making really significant goals too,” Ray said. “And so there’s not enough material out there for all of us.”

She reiterated the company’s focus on consumer engagement with recycling as one strategy to boost supply. She also highlighted Coca-Cola’s involvement with The Recycling Partnership, the Closed Loop Fund, Keep America Beautiful and other initiatives tackling recycling collection in the U.S.

As a couple examples of areas for PET bottle collection improvement, Ray pointed to recycling in the commercial sector, such as in restaurants, as well as in public areas that might lack recycling infrastructure.

“If you go through your local park and there’s no bins for you to even recycle there, we’ve lost that bottle or can,” Ray said.

The company is also experimenting with different types of collection systems. As one example, Ray said Coca-Cola has installed reverse vending machines in non-deposit areas.

Financial health of the sector

The plastics recycling industry has had its share of financial volatility, even before the coronavirus pandemic. And the disruptive effects of COVID-19 have piled on. Major PET bottle reclaimer CarbonLite cited COVID-19 pressures in the company’s recent move to declare bankruptcy.

Ray anticipates external forces will continue to affect the economics of plastics recycling. “I think we’re going to continue to see commodity prices go up and down, I don’t think there’s any way of getting around that,” she said.

Ray suggested continuing to focus on building up demand.

“I think the reality is we need to help the system truly be sustainable, be able to ride these different tides that come in and also know that there’s going to be an end market, someone that wants to buy that material back,” she explained.

As a major end user, Coca-Cola is also impacted by fluctuating commodity prices.

“The pricing of recycled plastic has been a challenge, even this year we saw huge dips in virgin [pricing], and this is the year that we’re launching all of our 100% RPET,” she said. However, the pricing is not moving the company away from recycled material use.

“It’s no longer just about sharing the goals that we have, it’s about showing them come to life,” Ray said. “So we are committed to this, our end goal is to help make this system truly sustainable so that it does get to a price parity, but we also need to make sure that all the pieces in this value chain are strong, so that we can withstand some of those challenges that we’re seeing some of the producers go through.”

A version of this story appeared in Plastics Recycling Update on May 12.