State electronics recycling laws in the U.S. have always been a laboratory of policy approaches to achieve a common end – providing recycling programs for households (and sometimes others).

However, state e-scrap programs face a common challenge in trying to balance the competing demands of the stated goals in the legislation with the market forces on the ground. Those forces include the supply of electronics provided in a particular community, the collection requirements, and global market dynamics for the commodities contained in the devices.

Against this backdrop, the changes implemented in the Illinois program starting in 2019 have been held up as a potential model for the wider industry. At the most basic level, the Illinois legislative changes, passed in 2017 and 2018, attempted to remove the focus on pounds collected by manufacturers and place greater emphasis on ensuring collection programs would be maintained regardless of the tonnages coming in.

The Illinois experiment is still in the early stages of implementation, but its first two years have shown that it is in fact providing a new viable framework that other states may be able to emulate.

The Illinois program was established by law in 2008. Over the initial years of the program, legislative amendments broadened the scope of the devices eligible under the program and tweaked the formula for how much weight manufacturers were required to collect.

That approach came in the form of the Consumer Electronics Recycling Act (CERA), which was initially passed by the Illinois legislature and signed by the governor in 2017. Instead of focusing on pounds collected, the legislation emphasized collection coverage for counties, making manufacturers responsible for providing ongoing service. Coverage means that a local government – a county or other similar jurisdiction – can count on the manufacturer program providing pick-up of covered devices throughout the year, regardless of how many pounds come in. The coverage also includes a minimum number of collection sites for each county opting in, depending on population density.

Weight-based goals under the previous versions of the Illinois law provided incentive for manufacturers to stop supporting collection programs once their goals were met, and the collection-coverage approach under CERA was geared toward solving that problem.

However, there were naturally some compromises that came along with CERA. For one, CERA collection systems are limited to covered devices coming from households only – previously, the Illinois program covered material from some types of business, nonprofit entities and schools. It is worth noting, though, that the expansive set of devices covered under the Illinois law (only New York is as comprehensive) did not change.

Another compromise is that CERA eliminates the bonus pounds incentives that had been in place for manufacturers collecting from nonprofit groups and rural areas, since pounds were no longer the emphasis. The new law also does not provide full coverage of all costs by manufacturers, as it envisions shared responsibility for collection. Manufacturers must cover all costs from bulk transportation (full trailer loads) through final recycling. Collectors are allowed to charge drop-off fees, but they can also face charges if pick-ups are less than a minimum weight.

Finally, CERA does not guarantee collection coverage throughout the state automatically. Importantly, the law requires counties to “opt-in” to have service from the manufacturer program/s.

The opt-in process for counties occurs annually, and this provides the map that manufacturers must service. Manufacturers of covered devices can choose to offer bulk transportation and recycling to all of the counties that opt in. Manufacturers can operate individually, in a group or through a “super-group.” This last category, also called a “manufacturer clearinghouse,“ is defined as any group of manufacturers that together account for more than half of the total obligation. In the initial years of the revamped program, all participating manufacturers have elected to join the clearinghouse.

Working out the details

Ultimately, the manufacturer advisory committee chose a strategy called the group plan allocation approach. Under this framework, the clearinghouse serves as an umbrella organization and allows manufacturers to participate in recycling programs run by “group plans” underneath. The job of the clearinghouse is to allocate, or assign, counties and their collection programs to the various group plans in a way that fairly distributes the pounds and costs. Group plans and manufacturers are free to choose which recyclers they want to work with and the clearinghouse attempts to honor existing relationships wherever possible. Manufacturers can change group plans from year to year, and can take on a county assignment on their own if they choose.

Out of the deliberations by the manufacturer advisory group in 2018 came the final “rules” that would govern the clearinghouse and manufacturer participation. The rules included details on a key aspect of the program that goes beyond what the legislation requires. Manufacturers and their group plans were given incentive to continue private programs that operate outside of the county programs. The more they collect in “private program” weight, the fewer opt-in counties they have to cover. These private programs include collection at retailer stores, nonprofit organizations, curbside collection, and programs from counties that did not opt in. Many manufacturers had been supporting these collecting programs for years and had built networks that they wanted to see continue and get credit for under the new approach. An annual “true up” calculation was built into the rules to determine if any group plans over or under-collected for the year; those differences carry forward to future years to keep everyone on a level playing field.

Another key component of the rules was spelled out in general terms in the 2018 amendment to the law for how manufacturers are to allocate responsibility amongst themselves. This is the key data component that drives how much manufacturers and their groups should be collecting each year (in pounds) and is the measure by which the true-up calculation is performed. At the basic level, each manufacturer is assigned an “obligation percentage.” That is the percentage of the total, undefined amount of pounds to be collected each year. The law specifies that this be based on the manufacturer’s market share in a product category (in weight, not units) multiplied by that category’s return share in the waste stream. As the following example shows, this can include manufacturers that sell multiple product types.

If Manufacturer A joins a group plan that has a total of 10% of the manufacturer obligation (including Manufacturer A’s 3.3%), the clearinghouse will look to assign counties that are expected to collect 10% of the pounds for that from opt-in and private programs. 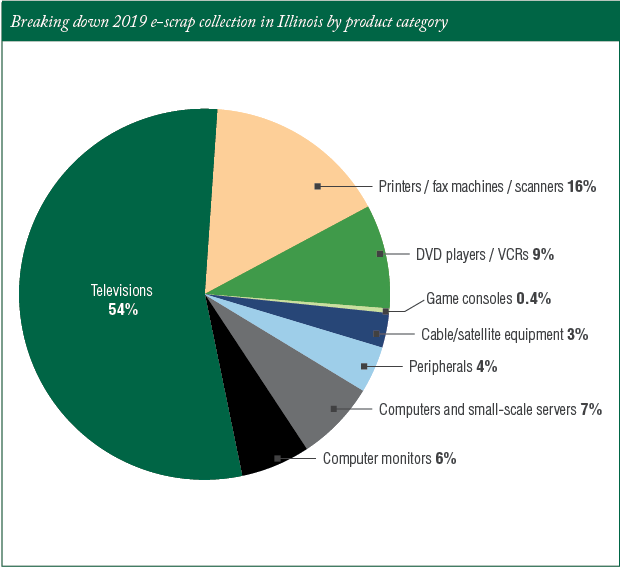 Once the rules were established, it was time to launch this new program with several steps taking place in 2018 leading to the January 2019 start.

First, counties had to officially opt in to the program in March 2018, and 58 local government jurisdictions did so. In all, those opt-in counties accounted for almost 90% of the state’s population. Manufacturers had to register in April and select one of six group plans that would operate in 2019. Next, the clearinghouse needed to look at prior years’ data to estimate the amount each county would collect. Finally, the clearinghouse, taking existing relationships and preferences into account, assigned each county to one of the group plans to provide bulk transportation and recycling service in 2019. All of these elements were included in the Clearinghouse Plan that was submitted to Illinois EPA and ultimately approved before the start of the program.

As with any restructuring of a complicated program, there were challenges in the initial rollout. Counties were unsure who they would need to work with, and group plans needed to explain their role as some were direct recyclers and others were management organizations who hired third-party recyclers. A group plan can be any entity that contracts with manufacturers to carry out their obligations under the law. Naturally, recyclers and management organizations who had contracted with manufacturers in the past and in other states wanted to also provide group plan services under the new CERA structure. Despite the challenges, the program was launched in January 2019 with few noticeable changes for the average Illinois consumer dropping off their used electronics.

The clearinghouse monitored progress through quarterly reports, and let each group plan know their progress in meeting its collective obligation percentage. In all, the opt-in counties and private programs from retailers, nonprofit groups and curbside collection programs brought in over 29 million pounds in 2019 – 51% of that weight came from opt-in programs and 49% from private programs. This represented a significant drop from the annual totals reported from 2016 to 2018. But this difference can be explained by the reporting quirks required under previous versions of the law. Collectors and manufacturers had previously reported separately, with no way to filter out double-reporting.

The second year of the program proceeded similarly to first, but several changes shifted the makeup of the overall plan submitted by the clearinghouse for 2020. The total number of group plans increased by one, and some counties that had opted in for 2019 dropped out while new counties joined. With several manufacturers also electing to change their group plans, all of these changes led to several shifts in assignment of counties to group plans for 2020. On the whole, the number of opt-in counties for 2020 increased to 61, and the percentage of the state population covered held steady around 90%. 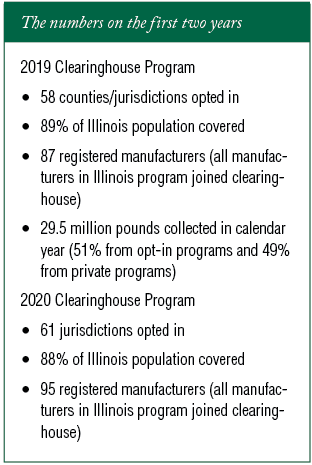 While still in the early stages of experience with this type of program, there are a few lessons that have been learned in Illinois thus far.

For one, the launch of the program and the successful negotiation of the rules for the clearinghouse demonstrates that this new approach can work. There have been many attempts over the years to bring electronics manufacturers together to develop joint collection programs in the U.S. The approach in Illinois under the clearinghouse had success in convening manufacturers to sort out details on how to most efficiently structure the recycling programs to meet the requirements of the law. Manufacturers have learned that this model may be able to scale and be replicated in other states with existing programs, and stakeholders are actively exploring those possibilities.

Second, the unique approach of having local governments opt in has worked to establish the ground rules for the minimum number of sites. But some counties have had difficulty in figuring out the site or events that would work best and have ultimately opted out.

Finally, as with any new or restructured program, education and communication are key to minimizing confusion, particularly when new entities are involved and requirements for collection change.