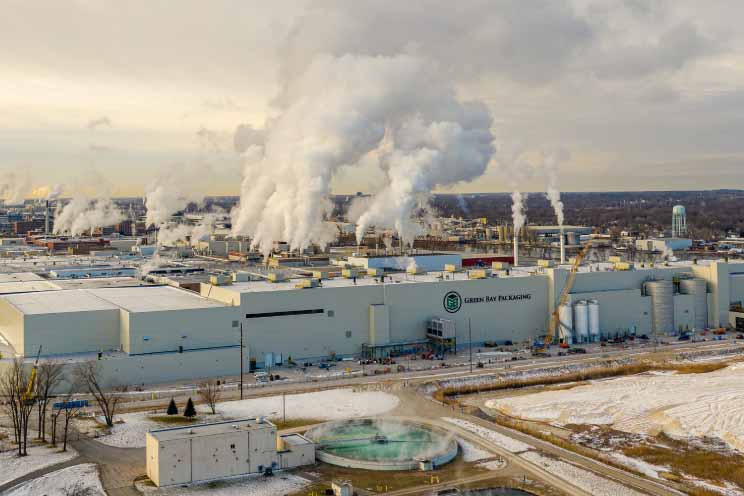 The mill’s completion is on schedule with the initial timeline, which forecast a spring 2021 start-up. | Courtesy of Green Bay Packaging.

The Green Bay, Wis.-based company on March 19 announced the development, describing it as a “significant milestone” in the mill’s process of ramping up production capacity.

The company first announced the mill project in June 2018, stating it would build a $500 million facility using 100% recycled fiber sourced from OCC and mixed paper. The mill was constructed to replace the company’s 70-year-old paper mill in Green Bay.

When the project was first announced, recovered paper research firm RISI reported it would have a capacity of 685,000 tons per year.

The mill was outfitted with equipment supplied by Voith Paper, and it includes “cutting-edge papermaking and fiber recycling technology,” according to Green Bay Packaging.

Green Bay Packaging in 2018 had a decision to make about the mill’s future, company Executive Vice President Bryan Hollenbach said during a recent local economic development forum. The mill was aging and needed replacement within the next few years, and the company was considering either closing the mill and rebuilding elsewhere, or building a new facility in Green Bay while the existing mill continued to operate.

The company ultimately decided to site the new facility adjacent to the old mill. The company broke ground in August 2018, Hollenbach said.

The mill’s completion is on schedule with the initial timeline, which forecast a spring 2021 start-up.

In a press release, Matt Szymanski, vice president of mill operations, attributed the success to a good working relationship between the numerous project stakeholders.

“The chemistry that was developed allowed us to meet our startup schedule in light of a global pandemic,” he stated, adding that the general contractor and equipment suppliers “were committed to the success of this project, delivering a world-class paper mill.”