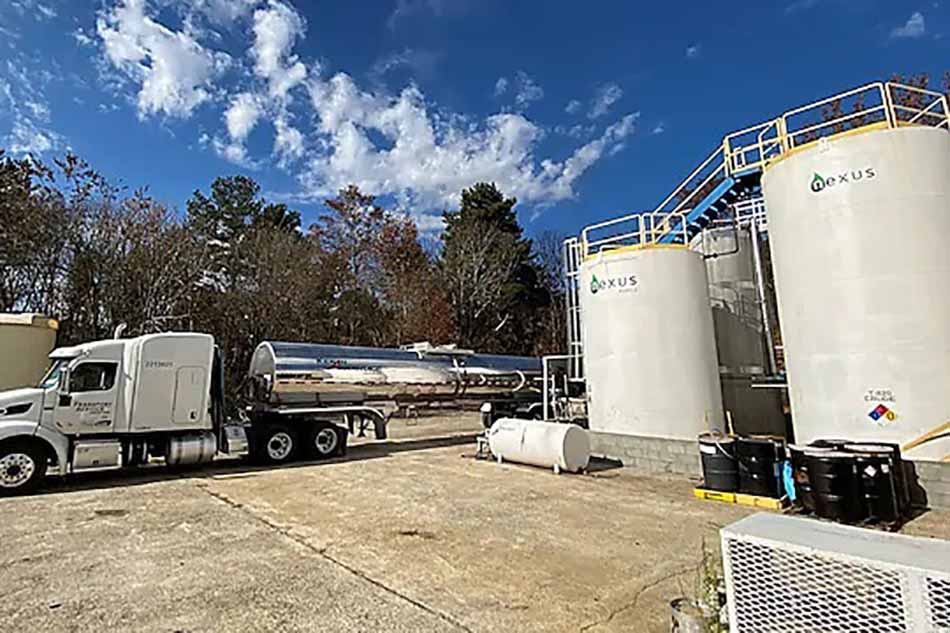 Nexus Fuels uses pyrolysis technology to convert a mix of post-consumer plastics collected at the curb into chemical and wax products. | Nexus Fuels

For the past two years, difficult-to-recycle plastics have been collected in Cobb County, Ga. through the Hefty EnergyBag program. A downstream processor recently described what happens to that material.

In an interview, Jeff Gold, CEO of Atlanta-based Nexus Fuels, described how his company uses its pyrolysis technology to convert the mix of post-consumer plastics collected at the curb into chemical and wax products (pyrolysis involves heating material in the absence of oxygen). Among the companies buying the chemicals are Shell and Chevron Phillips Chemical (CPChem), which feed them into their plastic production plants.

“That’s their selling point is to be able to say, ‘This plastic product was made with 100% recycled plastic material,” he added.

The EnergyBag program accepts a variety of household plastic items in orange bags collected at the curb, including multi-layer films, polystyrene foam, plastic utensils, straws and other materials. They’re sent to MRFs, where the bags are picked before they enter automated sorting systems. Then they’re shipped to different downstreams.

Across the U.S., the EnergyBag program, which is backed by Dow and Reynold Consumer Products, has signed up communities in Idaho, Georgia and Nebraska. Those programs have collected over 2 million pounds of material.

The program in Cobb County, which is an Atlanta-area jurisdiction that includes the city of Marietta, launched two years ago.

Need to pre-sort the materials

For the past year, bags from Cobb County have made their way to Nexus Fuels via a MRF operated by WestRock, a paper packaging producer. Gold explained that the first loads of EnergyBags came straight to Nexus Fuels, but the company found they contained high levels of contamination, including metals, PET bottles, even shoes and clothing.

To solve the problem, WestRock has an employee open the bags and presort them to remove obvious contaminants, Gold said. The usable material is transferred to gaylords, which are shipped to Nexus Fuels.

Contaminants still get through, including metal clips, chip bags with aluminized linings, and PVC items. But, generally, the quality has improved considerably, Gold said.

“In general, the material is very, very usable to us now,” he said.

When shipments arrive, if they still contain visible contaminants, Nexus will perform a manual floor sort to remove obvious contaminants, such as paper items. Then, the material is shredded before undergoing a manual sort, followed by magnetic separation. Finally, it is shredded again and sent to the heated sections of the pyrolysis system, Gold said.

The EnergyBag materials get mixed in with feedstock from other sources within as far as a couple-hundred-mile radius of Atlanta, Gold said. Most of the other feedstock consists of lower-grade post-commercial and post-industrial films, along with some mixed rigids. The EnergyBag program provides a very small percentage of Nexus’s overall feedstock, said Gold, who called it “a drop in the bucket for us.”

According to a program spokesperson, in 2021, Cobb County stakeholders are hoping to achieve a milestone of 100 tons processed through the program.

From plastics to plastics

The wide-spec oil produced contains light and heavy fractions, Gold said. Because most hydrocarbon cracking units these days are designed to process natural gas, there aren’t many left that can handle a heavy liquid feed such as Nexus’s, Gold explained; however, Nexus’s partners have equipment that can efficiently process the oil.

On Jan. 25, Nexus announced that the company has also signed an agreement to sell pyrolysis oil to Chevron Phillips Chemical (CPChem) for processing into new plastic at CPChem’s Baytown, Texas plant. Gold said he wasn’t able to disclose a tonnage figure for that contract. CPChem received ISCC Plus certification for converting pyrolysis oil to ethylene, HDPE and LDPE at the Baytown cracker. Nexus Fuels, itself, has also received ISCC Plus certification for converting mixed plastic scrap into pyrolysis oil.

A version of this story appeared in Plastics Recycling Update on January 27.