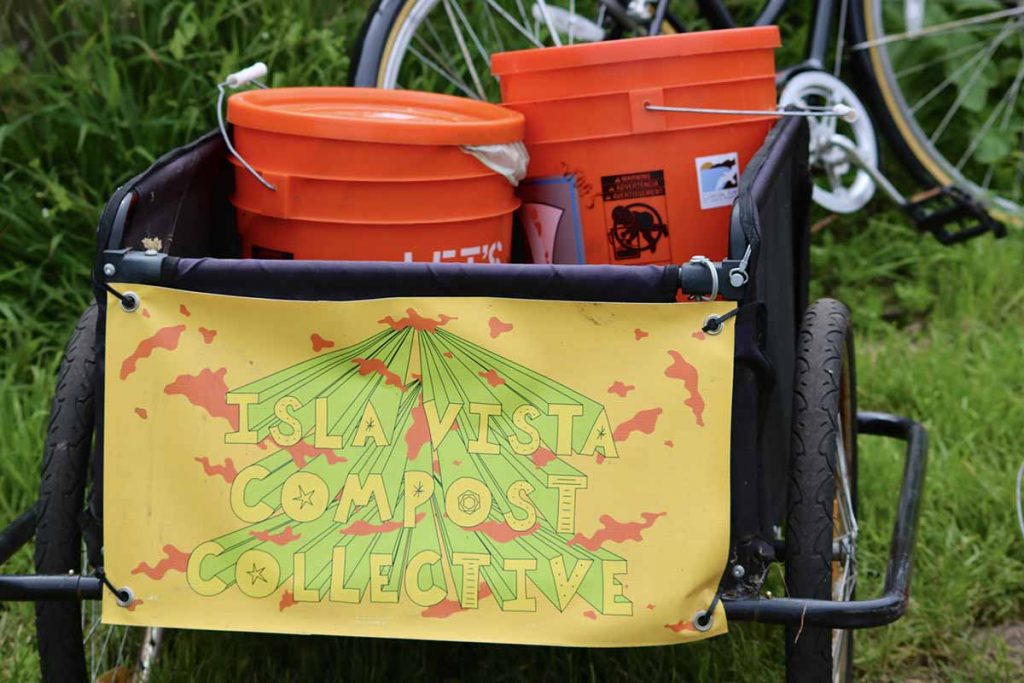 The Isla Vista Compost Collective officially began in the fall of 2017. It is now a growing, municipally run project.

I am fortunate to have grown up in two distinct places in California: Silicon Valley, known for business and entrepreneurship, and West Marin, known for serene landscapes and environmental preservation.

Little did I know that through these experiences, I was slowly developing a passion for using business to create more sustainable communities. The specific venture I helped launch was a small-scale composting program on the California coast, which over just a few years grew from a handful of buckets in a handful of houses to a thriving initiative being administered by local government.

Here’s the story of how a simple food scrap diversion idea grew in one community.

After my first year of college at the University of California, Santa Barbara (UCSB), I moved from the student dorms to Isla Vista, one of the most densely populated coastal communities in the country. I soon began to notice the exorbitant amount of food being sent to the landfill by households. At the time, I was saddened to see so much food going to waste, but I also was excited about the potential to make a difference in my community.

Around this time, the Isla Vista chapter of the Surfrider Foundation began to hire interns for their Ocean Friendly Gardens (OFG) Committee. I was accepted into the effort and immediately proposed that the OFG committee develop a community compost program. The committee was ecstatic about the concept, and so began Isla Vista Compost Collective (IVCC).

We officially started the program in the fall of 2017. It took my team of five a couple months to develop a model that we thought could be expanded throughout Isla Vista. But we were confident in the model we had developed, which involved the use of bikes, cargo trailers and 5-gallon compost buckets. We soon began to provide compost buckets to a couple houses as we worked on receiving funding to purchase a cargo trailer and other composting materials.

By the winter of 2018, we had secured funding and were able to collect material from 10 houses. Each week, we collected a bucket from each house, weighed it and sorted through all the food scraps we collected. We then would text each household how much weight in food they composted and what they composted incorrectly as a way to make the program educational and interactive.

Initially, we composted in food scrap collection bins that were graciously donated to our program by local hauling company MarBorg. Over time, we shifted toward biking the majority of the food scraps we collected to local three-bin compost piles that were managed by UCSB’s Edible Campus Program (ECP). We fostered a relationship with the ECP after they had built compost piles alongside local community gardens and were looking to compost for more community members.

By the fall of 2018, we had increased our capacity to 20 houses. By winter 2019 we expanded to 48 houses and by fall 2019 we were servicing 96 houses. At this point, we had outgrown our ability to function under the Surfrider Foundation and unfortunately had to stop the program until we could find a different framework.

Throughout the process of developing a residential compost program, I learned a great amount about how to successfully manage a small-scale materials recovery initiative.

First is the fact that it’s critical to foster a sense of community behind your program. At IVCC, we did this in a couple different ways. We hosted a weekly compost competition between the households we serviced, highlighting the household that composted the most food waste per person on our social media. This competition garnered substantial attention and contributed greatly to the sense of community among participating households. As mentioned previously, we also made an effort to give back to the community by composting in local compost piles. The compost was then laid in local community gardens and used to grow fresh vegetables that members of the community could consume at no cost.

Another important takeaway: Branding and marketing are central to success, even for a very small initiative. Before we officially started composting for houses, we developed a logo that we felt represented both the community and composting (a worm surfing a wave of compost). We placed a sticker of this logo on each of our 5-gallon buckets. We also quickly started social media accounts where we focused on developing a unique brand. Over time we found that many community members had become aware of and were interested in joining IVCC due to our unique branding and marketing. At one point, we had over 200 households on our waitlist.

Once you have people’s attention, the next step is to engage with them. We kept IVCC participants engaged by providing them with weekly updates on what they composted incorrectly and how much weight they composted. We also shared their collective impact by totaling the amount of food composted per week over all households. We have continued to share weekly compost updates and are close to having diverted 30,000 pounds of food from the landfill.

Finally, collaborating with other organizations and key stakeholders is an important method to further develop a program, especially in its early stages.

We approached the Associated Students Food Bank regarding a potential partnership based around collecting non-perishable food and donating it to those in need. The idea was that our organizations would work together by using IVCC’s bikes and cargo trailers to pick up food from households in the community and donate it to the AS Food Bank. The program was wildly successful and to date has donated thousands of pounds of food to the food bank through bike and cargo trailer as well as community drop-offs.

I hope that by sharing the story behind Isla Vista Compost Collective and the many lessons learned along the way, others will be inspired to develop their own composting programs within their community. Considering our current infrastructure, we are greatly in need of more small-scale composting systems that support and give back to their local communities.

Jacob Bider is a recent graduate of the environmental studies program at the University of California, Santa Barbara. Contact Bider at [email protected]