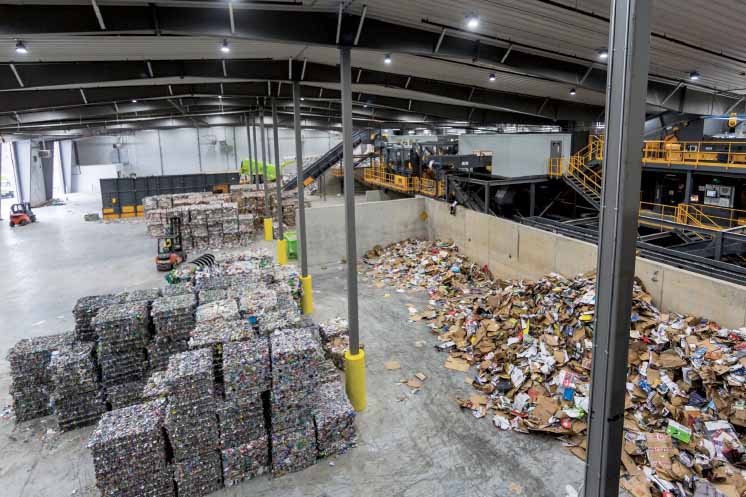 The city of Winnipeg’s inbound contamination rate averaged 14.5% over the first two months of 2020, according to GFL Environmental.

As of last October, the Canadian city of Winnipeg has been sending its household recyclables to a technology-heavy MRF that uses seven optical sorters and a robot.

Owned and operated by GFL Environmental, the 80,000-square-foot facility brings in all residential material from Manitoba’s capital city, population 764,000. The single-stream residential collection program in Winnipeg uses carts, and the MRF also takes in commercial material as well as recyclables from other communities. Approximately 40 trucks collect recyclables from about 40,000 households each day, and each truck typically makes two daily deliveries to the MRF.

Using a separate sorting line, the facility also processes commercial recyclables, with the collection approach varying depending on the source.

About 65% of the stream entering the MRF is fiber and 35% is containers.

GLF’s Winnipeg MRF has a total capacity of 100,000 metric tons per year, and it is currently running at about two-thirds capacity. It uses equipment supplied by Machinex, a Quebec-headquartered recycling machinery manufacturer. That equipment includes seven optical sorters, one SamurAI robotic sorter, a ballistic separator and two single-ram balers. 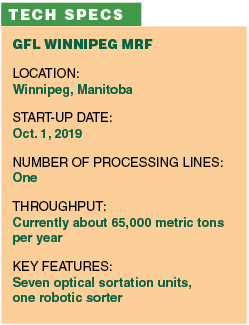 “The MRF receives material with levels of contamination which would normally be expected in a single-stream recycling program, including organics and textiles, as well as full or partially full beverage containers,” Sidler said. “GFL appreciates the partnership and work that municipalities which deliver to this MRF undertake in order to reduce incoming contamination and to mitigate the most problematic types, such as organic material.”

The city of Winnipeg’s inbound contamination rate averaged 14.5% over the first two months of 2020, according to GFL Environmental.