Waste Management and others see lift from fee-for-service 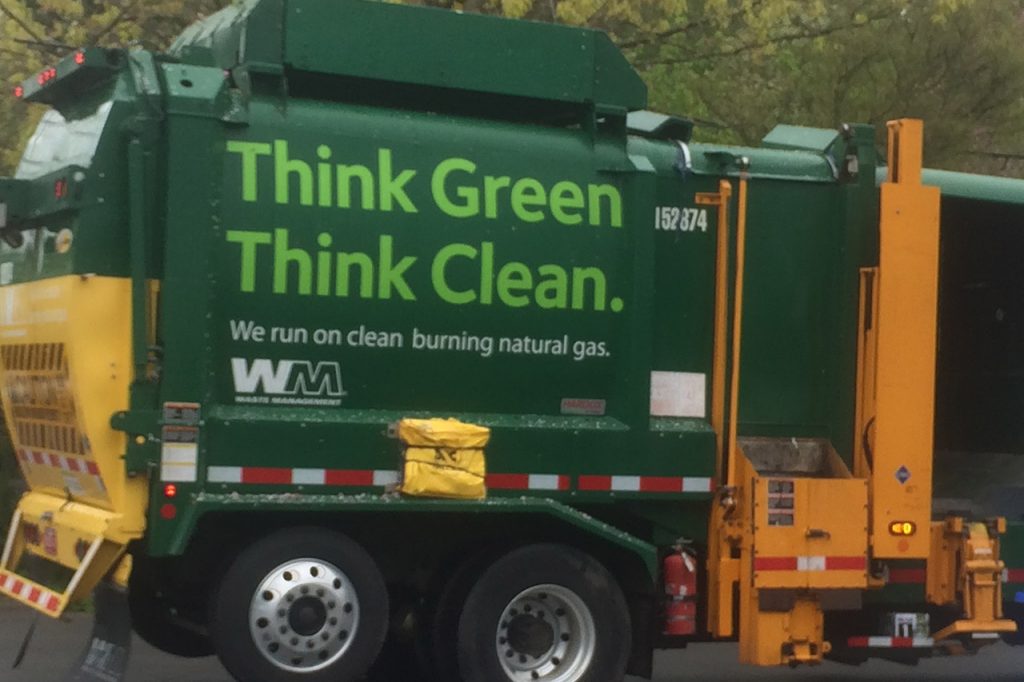 The top four experienced decreases in recycling revenues in 2019: a drop of 20% for Waste Management, 8% for Republic, 31% for Waste Connections and 43% for Advanced.

The companies continue to be affected by depressed commodity values, particularly for OCC and other paper grades, driven largely by import restrictions in China and other Asian countries. Ever since China launched its National Sword campaign, the haulers have been experiencing market pains. They’ve responded by charging customers more to sort and sell recyclables.

John Morris, chief operating officer for Waste Management, said his company overcame decreasing commodity sales revenues with customer fees last year. As a result, recycling business earnings were only down by about $2 million, or roughly flat.

“Our recycling performance demonstrates the success we are having in restructuring and recycling contracts to a fee-for-service model,” he said during a Feb. 13 call with investors.

The following is more detail on each company’s results:

Waste Management’s recycling business brought in $240 million in revenue during the fourth quarter of 2019, down 29% year over year, according to a company press release. For the full year, recycling revenues totaled $1.04 billion, down 20% from 2018 (the numbers above include revenue from the company’s commodities brokerage business).

According to the release, in the fourth quarter, the operating EBITDA (earnings before interest, taxes, depreciation and amortization) fell by $12 million year over year. But for the full year, operating EBITDA was nearly flat.

“The company achieved this outcome in spite of a 35% decline in market prices for recycled commodities during 2019, due to the continued focus on developing a sustainable recycling business model that meets customers’ environmental needs on a fee-for-service basis,” according to the release.

During the call with investors, Morris said the company tallied a blended average commodity price of $37 per ton during the fourth quarter, down 43% year over year. For the whole year, the average was about $44 per ton.

During the call, Morris also provided an update on its “MRF of the Future,” which is under construction in Chicago. The facility’s sorting technology will use a positive sorting approach to generate high-quality material, Morris said. It will be fully operational during the second quarter of this year.

As of the end of 2019, the company operated 103 MRFs (including facilities that handle C&D debris).

Recycling now brings in over 6% of the company’s total revenues. During the fourth quarter, total company revenues were $3.85 billion, roughly flat year over year. During the full year, revenues totaled $15.46 billion, up nearly 4%.

In April 2019, Waste Management announced it would acquire Advanced Disposal Services, the fourth largest publicly traded residential waste and recyclables hauler in North America. According to Waste Management’s annual report, the company expects to obtain antitrust regulator approval for the transaction by the end of March 2020 and to finalize the acquisition shortly thereafter.

Over one-third of recycling contracts repriced

Meanwhile, Republic Services’ recycling business brought in $60 million in revenue during the fourth quarter, down 23% year over year. For the full year, recycling revenue totaled $273 million, down 8%.

“We continue to walk through city hall and tell the message around a model that needs to be economically sustainable, to be environmentally sustainable over time.” – Jon Vander Ark, Republic Services president

Like other companies, Republic Services has worked to reduce its exposure to commodity price changes. According to a press release, through the end of 2019, the company repriced about 36% of its recycling collection contracts. Those contracts represent about 55% of the company’s recycling volumes. The company also implemented a recycling processing charge for its open-market customers.

“As a result, the company’s earnings sensitivity to changes in recycled commodity prices is expected to decrease in 2020,” according to the release.

“We continue to walk through city hall and tell the message around a model that needs to be economically sustainable, to be environmentally sustainable over time. And I can tell you we’re seeing momentum shift,” he said, according to a transcript from Seeking Alpha.

During the call, Republic President and CEO Don Slager took aim at glass, calling it highly recyclable but noting it has low value. In some regions, he said, the trucking costs to get the glass to an end user “take the whole thing upside down.”

“So, we’ve got to have those honest discussions with generators about whether the material really does have real sustainable environmental value at the end of the day or are we just basically burning more rubber and more fuel to make ourselves feel good,” he said.

About 79% of the recyclables Republic processes are fiber, including OCC, ONP and mixed paper. In 2019, the company sold 2.2 million tons of material, excluding glass and organics, from its MRFs. That was down from 2.4 million tons the year before.

Recycling now brings in a little over 2% of Republic Services’ revenues. During the fourth quarter, total company revenues were $2.58 billion, up 2% year over year. For the full year, revenues totalled $10.3 billion, up nearly 3%.

Sting from tumble in OCC price

Waste Connection acquired a number of companies in 2019. Excluding the revenue impact from those acquisitions, its recycling business brought in $12 million in revenue during the fourth quarter, down 46% year over year.

During a Feb. 13 conference call with investors, company President and CEO Worthing Jackman noted the average price Waste Connection fetched for its OCC was $41 per ton during the fourth quarter, down 56% year over year.

Recycling now makes up 1% of Waste Connections’ total revenues, according to a company press release. During the fourth quarter, total company revenue was $1.36 billion, up 8%. For the full year, revenue was $5.39 billion, up 9%.

Recycling revenues chopped in half

The following is a look at key fourth-quarter recycling-related numbers from the five largest publicly traded residential haulers in North America:

Advanced collected nearly 653,000 tons of recyclables in 2019, according to the company’s annual report. That weight collected was up less than 1% from 2018.

As of the end of the year, the company had three MRFs and 19 locations where recyclables are received and baled.

Recycling now makes up 0.5% of the company’s revenue. For the fourth quarter, total company service revenue was $401 million, up 1% year over year. For the full year, total revenue was $1.6 billion, up 4%.

For the last four years, the company has worked to reduce its reliance on commodity prices by renegotiating contracts and charging fees. For example, in 2019, nearly 37% of Casella’s recycling revenues came from commodity sales; that was down from nearly 78% in 2015.

Recycling now makes up less than 6% of Casella’s total revenues. During the fourth quarter, total company revenues were $194 million, up 11% year over year. For the full year, revenues totaled $743 million, up 13% over 2018.