How robots are cleaning up a MRF’s paper bales 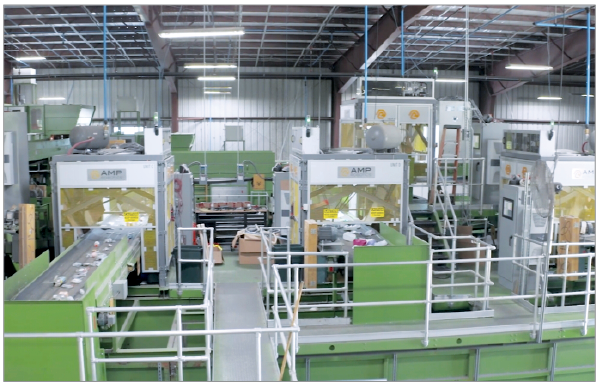 With 14 robots connected to 10 vision systems, Single Stream Recyclers (SSR) in Sarasota, Fla. has more robots under one roof than any other MRF.

A Florida company leveraging 14 robotic sorters is among the first recycling facilities to use the technology on fiber lines, boosting the value of paper bales.

“We’ve definitely realized the upside to having them with our end-market pricing,” said John Hansen, co-owner of Single Stream Recyclers (SSR). “What we thought would happen has really happened.”

Sarasota, Fla.-based SSR sports 14 robotic sorting arms connected to 10 visioning systems, which identify items on the belt based on their appearance. That’s more systems under one roof than any other known MRF in North America. The robots were provided by Denver-based software company AMP Robotics.

After AMP and SSR worked to overcome challenges adapting the robots to paper lines, the facility is today creating cleaner bales with a reduced headcount.

“At SSR, they’ve really shown just how far robots can go, where those robots are doing the bulk of the sorting of what used to be manual sorting in the facility,” said Matanya Horowitz, founder and CEO of AMP Robotics.

Even before it installed the robots, SSR’s 100,000-square-foot MRF had an impressive array of sorting technologies. The facility opened in March 2018, with the main plant supplied by Quebec-based equipment supplier Sherbrooke OEM. The MRF has Stadler ballistic separators and eight Eagle Vizion optical sorters.

In May, SSR bought and installed six robots from AMP, each a delta-style robot with a vision system. They went in the following locations on the container line:

The Carton Council provided funding to help pay for the carton-picking unit.

Hansen pointed to a few factors that spurred SSR to adopt robots. Labor is always a challenge, in terms of turnover and employee no-shows, he noted. SSR also started to pay closer attention when robots crossed the threshold of 30-40 picks per minute. “We saw that the technology had advanced far enough where it made sense,” Hansen said.

When AMP was founded five years ago, the company started by tackling container lines. The company is consistently building out a database of images the robotic systems reference to identify items in a fraction of a second. As AMP and other robot providers have developed their technologies, pick speeds have also increased significantly.

At SSR, the container line units were performing well within days of installation, Hansen said.

“The container line QC ones got up to speed in a real hurry and were really effective very, very early on,” Hansen said. “Literally days after the installation, days later they were picking 70 to 80 picks per minute.”

In May, AMP announced it had developed a dual-arm system, called the AMP Cortex dual-robot system (DRS), equipped to handle the onslaught of material on a fiber line. Two months after buying the first six robots for the container line, SSR bought another eight for its paper lines, Hansen said.

Horowitz said SSR was the first facility to install AMP’s robots on a paper line, although others have since done so, as well.

In September, SSR installed two DRS systems on a line making mixed-paper bales and two on a line making ONP bales. There are a total of eight sorting arms, each pair connected to a vision system. The delta-style robots are provided by Omron Robotics.

On the paper lines, the units are pulling out OCC, film and containers.

The delta-style robotic arms are working in pairs because the fiber belt is so wide. The belt speeds and material volumes are also high. Hansen said when humans were providing the bulk of the paper line QC, the belt was running at 140 feet per minute; with the robots, it’s running at 260-270 feet per minute, to create a better spread between materials.

Horowitz said preparing the units for the high belt speeds was a challenge, both in terms of accurate identification and reliable gripping. AMP has had to capture a lot of image data from the paper lines so the systems can identify materials, including those partially obscured by paper.

“As long as we can see even a bit of it, our robots can go after it,” he said.

A core problem they had to solve was gripping film, ensuring it doesn’t clog the gripper and fail to release, Horowitz explained.

At startup, the neural network’s ability to ID materials on the paper line wasn’t as advanced as for containers, Hansen said. That being said, “our product difference is still better than when we had people there.” And the paper line recognition abilities continues to improve, he said.

As is the case with other pieces of equipment, material preparation is key for robots, Hansen said. “If you have a bunch of burden depth and can’t adjust your lines to get singulation, you’re not going to have great success,” he said.

Because of the robots, SSR has been able to reduce headcount by 20, Hansen said. Because the facility is now running two shifts, that’s effectively a decrease of 40 people a day. Some of the employees will be retrained to monitor the robots, ensuring the grippers don’t get clogged or torn. SSR will have two people monitor the fiber robots and one monitor the container robots.

The robots are generating cleaner paper bales with higher yields, Hansen said. As a result, SSR is getting above-average prices. Hansen said the market for mixed paper will return eventually, and if facilities decide not to clean up their fiber, it will be destined for landfill.

Resource Recycling in August 2019 charted the fast adoption in North America of robots from AMP, Bulk Handling Systems (BHS), Machinex and ZenRobotics. According to Resource Recycling’s data, BHS has deployed the most robots in the U.S. overall.