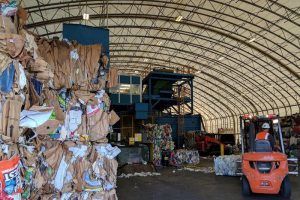 More than two years after a single-stream sorting facility launched on the coast of Florida, a funding partner has reported positive results for recycling in the area.

The Emerald Coast Utilities Authority (ECUA) has found its $10.6 million MRF investment to be a success: The agency is receiving financial benefits, the county’s recyclables are no longer being landfilled and nearby municipalities have cut down on transportation costs, according to a report from Closed Loop Partners, which helped fund the facility.

Three years ago, Escambia County, Fla. found itself in a jam. ECUA used to send recyclables to a mixed-waste facility in Montgomery, Ala., until that plant closed its doors in late 2015.

Once the Infinitus Renewable Energy Park (IREP) facility stopped accepting material, the county had a difficult decision to make. The program had built up to a 72 percent participation rate, despite being voluntary, and residents generated 22,000 tons per year of recyclables. There were no facilities to sort almost any of the material, but rather than end the recycling program and lose the enthusiasm and collection progress, the county asked residents to continue recycling but temporarily landfilled collected material.

Meanwhile, the county looked for another option, and it didn’t take long to settle on a plan: ECUA would build a MRF to meet the local and nearby sortation demand. With help from a $3 million loan from the Closed Loop Fund, the county began developing the 53,000-square-foot facility, which sits on 120,000 square feet of land.

Several design choices, including the use of a tent-like structure and simple trailers for offices, meant a faster turnaround time and fewer costs. The facility opened within one year and cost about $500,000 less than an equivalent MRF, according to the report. And the plant has continued to give the county an economic advantage.

“The facility creates three types of financial benefit: savings to ECUA, in the form of avoided landfill tipping fees; tipping fees collected from other municipalities and haulers; and revenues from commodity sales,” according to the report.

The income equates to a total economic benefit of $96 per ton on average, according to the report.

“Thus, the facility has become an asset for a region that had not previously had a long-term or reliable solution for processing recyclables,” the report states. “Having a MRF in closer proximity also reduces the environmental impact of transporting materials.”

From January 2017, a few months after the facility opened, through September 2018, the MRF processed 68,000 tons of recyclables. Overall, in the two years since its launch, the MRF has increased its monthly processing volume by 25%. In the latter months of 2018, the facility was processing material from 11 municipalities in Alabama and Florida, in addition to Escambia County’s recyclables.

Although it has proven successful, the new facility has had its share of challenges. It was financed and constructed prior to the market changes spurred by shifting export markets. The impact of China’s scrap import restrictions has led the county to make processing and strategic changes.

For example, on the processing side, as the mixed-paper market collapsed, the MRF heightened screening to improve the quality of its mixed-paper stream. It also began stockpiling material as it sought new buyers.

As for its strategic plans, the MRF is looking to sign more contracts with municipalities to increase its processing volume, and the county is looking to install more equipment, investigate automation and educate residents about proper recycling.