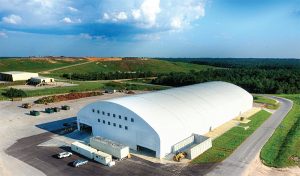 The Spanish word perdido translates to “lost,” so it’s fitting an advanced materials recovery facility has been built adjacent to Florida’s Perdido Landfill. The MRF is working to help the local community hold onto valuable commodities.

Owned and operated by the Emerald Coast Utilities Authority (ECUA), the $10.6 million single-stream MRF is expected to sort 40,000 tons per year. The facility was designed, manufactured and installed by Eugene, Ore.-based Bulk Handling Systems (BHS), and the project is a collaboration between ECUA and Escambia County. 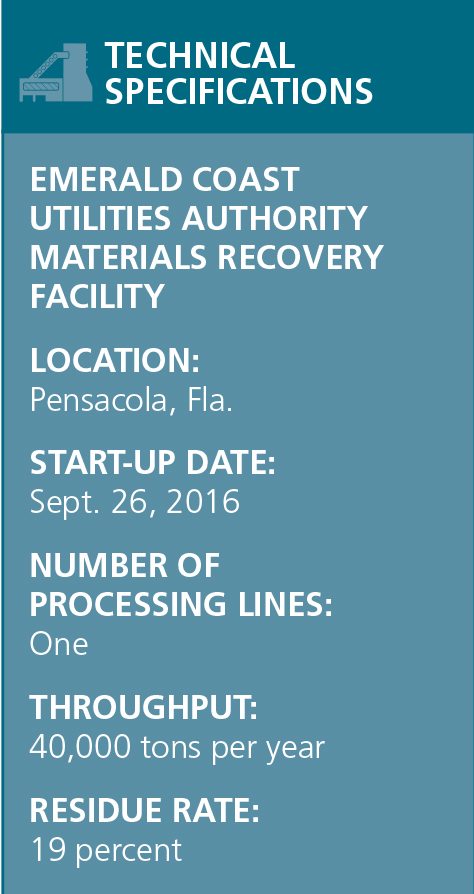 “Because resources are limited, our company’s focus is capturing value that might otherwise be lost,” Ted Pierpont, BHS director of sales, stated in a press release.

The 53,000-square-foot MRF came on-line in late September at the very western edge of the Florida Panhandle, less than a mile from the Perdido River, which separates Florida from Alabama. With a daily throughput of about 154 tons, the material coming into the facility is about 60 percent fiber and 21 percent containers. The remaining 19 percent is residue.

The sorting line is housed in a tent-like structure that provides an enclosure that is162 feet wide and 54 feet tall. The structure cost about $500,000 less than a 35-foot-tall steel building would have cost, said Nathalie Bowers, ECUA spokeswoman.

Zero Waste, Inc. runs the facility. The company’s operations director, Mark Buntjer, described the structure as “a high-tech, state-of-art, fabric building with great natural lighting.” It also has climate-controlled sorting cabins for the comfort and safety of the employees as well as a modular machine-control center.

As far as equipment goes, the MRF has the latest in metering devices, disc screens, magnets and eddy current separators. It also uses an NRT optical sorter.

In addition, a Nihot air drum separator is utilized for cleaning up glass. The equipment allows ECUA to maximize the profitability from the glass fraction, according to BHS.

At the beginning of the MRF line is the BHS Metering Bin Liberator Class, which is equipped with bag-ripping teeth to open bags and ease downstream separation.

The NRT optical sorter is configured to eject PET containers upward and mixed plastics downward while allowing residue to feed into a middle bin. HDPE is hand-picked before the optical sorter.

The system includes the BHS Total Control and NRT Connect automation and support capabilities, which allow the plant to automatically report on system performance and send alerts to the ECUA operations team and BHS technicians.

The MRF handles residential and commercial material from about 160,000 households in the Florida counties of Escambia, Santa Rosa and Okaloosa and the Florida city of Fort Walton Beach. Soon, the cities of Pensacola and Gulf Breeze will send their material to the facility as well, Buntjer said. 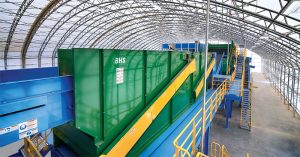 “Building this facility has been instrumental in eliminating our reliance on outside contractors for the processing of this region’s recyclables,” Steve Sorrell, executive director of ECUA, stated in a press release. ECUA first launched its voluntary recycling program in 2009.

“Now, we can focus on what’s really important: keeping recyclable materials out of the landfills and putting them to good use once again,” Sorrell stated.

The operation employs 28 people on one shift Monday through Friday.