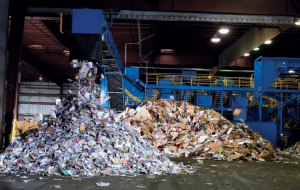 Clark County, Wash., and its seat, Vancouver, reflect a history of western exploration of the area.

Located in Vancouver, Columbia Resource Company’s West Van MRF has done its own work charting a path through turbulent markets.

“The facility was able to make adjustments for the ever-changing market as early as 2013,” said Derek Ranta, district manager for Waste Connections of Washington, parent company for Columbia Resource Co. “Because of our commitment to evolution, we were able to … continue to move material when China enacted its newest round of restrictions.”

Located beside the Columbia River, the West Van MRF uses one line to sort commingled recyclables from throughout Clark County, which sits across the Columbia from Portland, Ore. The entire facility totals 60,000 square feet; of that, 40,000 square feet is dedicated to recycling operations.

The MRF takes in material from 130,000 single-family households, 750 multi-family complexes and more than 8,000 businesses. Residential collection in the county relies on households putting all accepted materials except glass into a cart.

Glass is collected on the side in a bin.

For commercial generators, collection strategies vary, Ranta said. Commercial glass and food scraps are collected separately, but other commingled materials can be collected in carts, bins, drop boxes or compactors. Other commodities, such as specialty plastics or metals, can arrive source-separated.

Originally opened in 1992, the MRF processes between 200 and 250 tons per day of commingled recyclables (not including glass), using a sorting line provided by Krause Manufacturing, a division of San Diego, Calif.-based CP Group.

In fall 2017, a Waste Connections representative told The Columbian newspaper the facility had begun slowing the sorting line as a response to market changes brought about by China’s recyclables import restrictions.

Described by Ranta as a “dynamic site,” the West Van MRF processes 200 to 250 tons of commingled recyclables daily, and it also handles a number of special streams: organics, glass, yard debris, construction and demolition debris, urban wood ground up for use as hog fuel, and electronic scrap, he said. In addition, it extracts recyclable materials from up to 450 tons per day of MSW.

Countywide, the recycling rate (not including waste to energy) tops 50 percent. Residents in Clark County automatically receive recycling service when they sign up for the required garbage service. Recyclables collections and billing are done on a pay-as-you-throw system, collected every other week.

The biggest issue the MRF deals with is plastic bags, which have never been accepted but are still prevalent in the stream.